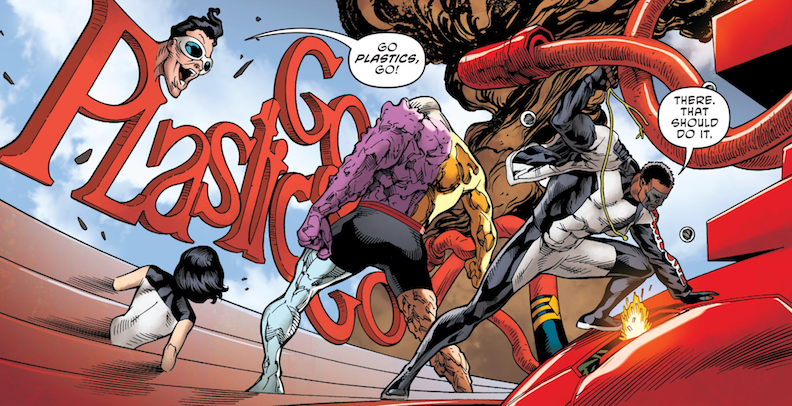 As we wrap up our comic book reading for the year, it’s time to take a look at some of the things that I thought were the highlights of 2018. Since the first week of January, I bought the first issue of close to three dozen different ongoing or limited series. I whittled that down to a list of 15 new comic book series or miniseries that I really enjoyed this year.

We looked at the first five on the list in PART ONE. Let’s continue our dive in with the second edition of the list.

Part of the Publisher’s NEW AGE OF HEROES initiative that didn’t really get off to a great start, THE TERRIFICS was the exception. Written by Jeff Lemire, the book starred Mr. Terrific, Metamorpho, Plastic Man and Phantom Girl as a grudging team of heroes incapable of getting more than a mile away from each other without things going boom.

The team is structured like DC Comics’ version of the FANTASTIC FOUR, and the homage takes the team on a multiversal journey to try and solve the mystery of the missing TOM STRONG. Lemire has fun with the concept and the characters, putting them in adventures that are rarely seen within this universe.

Writer Mark Millar creates these fantastic worlds. He invites readers to peak in on them for a brief period of time and then closes the door on them. Maybe he revisits them later, maybe he doesn’t, but I enjoy the finite nature of the stories he tells. THE MAGIC ORDER – the first book created under MILLARWORLD‘s deal with Netflix – takes us to a world where magic exists, only no one knows about it because of the Magic Order, a collection of families that protects the world from its dangers.

The miniseries, with art from Olivier Coipel, dives into a family desperate to hold themselves – and their roles in the world – together in the face of immeasurable danger. If the Netflix series being developed is half as good as this standalone series, we’ll be looking at a bonafide hit.

Much like DICK TRACY on yesterday’s list, NANCY DREW is a product of the 1930s that got a bit of a renaissance this year. While the creative team on the DICK TRACY book kept pretty true to the character’s roots, the creative team behind NANCY DREW brought the teen detective into the 21st Century with a murder mystery that kept her and her friends on their toes.

The writing from Kelly Thompson was fun, and it felt true to a modern-day teen detective. And the art from Jenn St-Onge was truly a joy to look at. Hopefully, Dynamite brings these two back for more fun soon.

There have been any number of series that have revisited Neil Gaiman’s world of THE SANDMAN since the series ended 20-plus years ago. But now, the publisher has gone with a coordinated effort to create a SANDMAN UNIVERSE, with a handful of books taking up the mantle. My favorite, so far, has given me the chance to catch up with the characters that made up Morpheus’ realm, THE DREAMING.

Si Spurrier’s new adventure, as Lucien the librarian struggles to keep control after the Dream King leaves his kingdom again, not only gives us the chance to catch up with Cain and Abel, Merv Pumpkinhead, Matthew the Raven and other favorites, but we’re getting to meet new characters who could easily be woven into the SANDMAN‘s epic world.

Only one of two books on my list that only had one issue in 2018, Geoff Johns’ long-awaited epic about the former Captain Marvel more than delivered on its promise for a fun exploration of Billy Batson and his family of superheroes who no longer have names.

Dale Eaglesham’s art is fantastic and the reimaginings of Batson, Freddie and the rest give a modern feel to characters that have been around for decades (that seems to be a theme this year). Based on the first issue – and with the movie starring Zachary Levi coming out next year – SHAZAM should be a book to watch in 2019.

What are your favorite new series this year? Let us know in the comments, and be sure to check back for part 3, which will feature more magic, more heroes and even some villains!

Looking Forward to DC’s May Releases