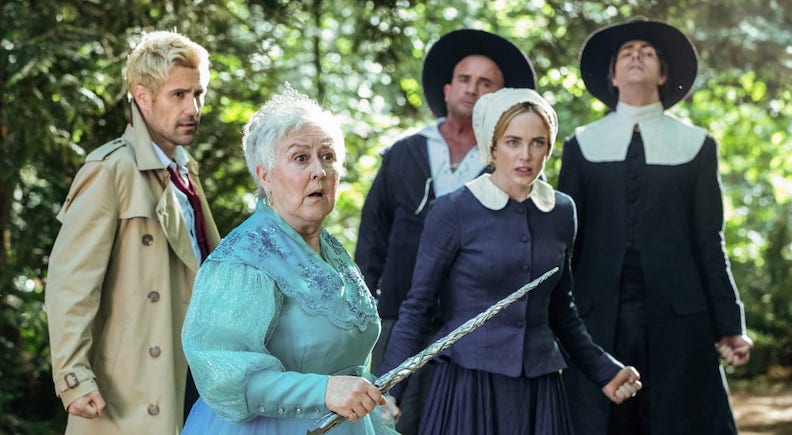 The absurdity that made LEGENDS OF TOMORROW so great last year returns with the second episode of the season. The show is at its best when they take a couple of seemingly disparate concepts and throw them together into a story and see what they can make out of it. And to make it better, the DC Comics property pokes some more fun at a Disney property.

The Legends end up going back to the Salem Witch Trials to save a woman from being unjustly accused of being a witch. Considering the magical nature of the battle in front of them, it would be good to have rogue mage John Constantine on their side. Despite telling Sara last week he wanted nothing to do with the team, however, John comes onboard after he gets spiritually attacked and threatened at the end of the season premiere.

Of course, the woman being accused of being a witch doesn’t have a magical bone in her body. But her daughter has bonded with the Fairy Godmother, who serves the daughter much in the same way as a genie from a lamp does, causing some problems in 1692 Salem. She also causes some problems for the Legends, turning Ray and Mick into animals and leaving the team with just Sara, Zari and John Constantine to take the Godmother down.

The winning strategy is less fighting and more negotiating with the daughter linked to the Fairy Godmother, convincing her to sever her ties with the witch before John Constantine sends her to hell, which she chooses to do instead of helping John deal with the threat he’s about to face.

While the rest of the team is back in 1692, Nate stays in 2018 Washington D.C. to have dinner with his father and try and improve his familial relationship. It doesn’t go well, and a bummed Nate returns to the Time Bureau headquarters, where he’s been staying, before getting discovered by director Ava Sharpe. Ava enlists Nate in helping her get more funding from the federal government. He’s primed to take point on Ava’s request until he sees who he’ll be requesting funds from.

The negotiations with Hank Heywood allows for even more silliness, as Nate sends Gary in his stead and Ava flails a bit in her duty until Nate steps up to face his fear. It gives Nate the chance to recap the craziness that the Legends have faced, including the newly-pigged Ray. When the Legends in 1692 defeat the Fairy Godmother and Ray turns back to human form in Nate’s arms, Hank Heywood gives in and agrees to give the Time Bureau an annual $4.2 billion. Ava convinces Nate to stick around HQ to help her with things on the home front.

This episode has me excited for the rest of the season again!