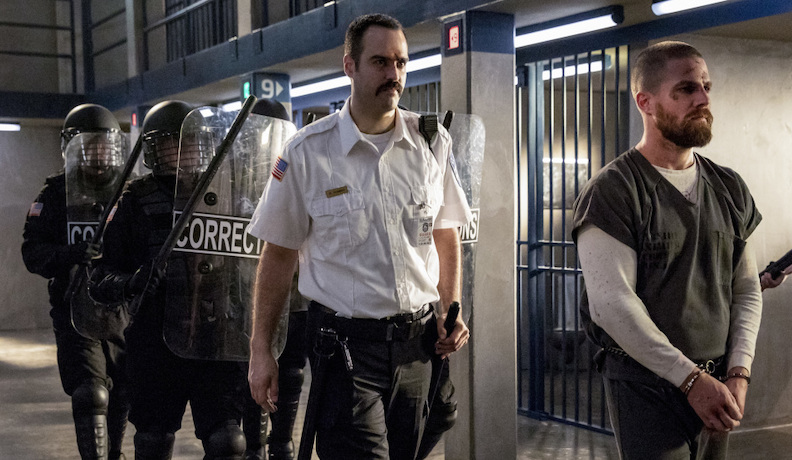 Everyone wants Ricardo Diaz, but what are they willing to do to get him?

The opening arc of ARROW‘s seventh season is proving to be a good mix of prison drama and villain chase, with two sides working different angles towards the same goal. Oliver Queen is dealing with people in prison trying to get to Ricardo Diaz, while Felicity leads the rest of Team Arrow in getting the crime boss off the streets.

Oliver’s efforts are focused on the three supercrooks he’s been battling this season: Brick, Bronze Tiger and the villain formerly known as Stardust. In this episode, he starts putting more pieces together, that there’s a man calling the shots in Slabside Prison (still a terrible name) and he wants Bronze Tiger and Brick to tell him who that man is.

But Brick proves to be one step ahead of Oliver again. And when the former Green Arrow beats Stardust in a prison fight club showdown, Brick goads Oliver into attacking some corrections officers in order to be transferred to a different area of the prison. So much for doing his time and keeping his head down.

Meanwhile, back in Star City, Felicity has convinced FBI Special Agent Samanda Watson to go off-book in an attempt to catch Diaz while he tries to steal something from the CDC. Shockingly, Felicity has gotten over the fact that the FBI broke their agreement with Oliver and are content to let her husband rot in prison while Diaz is still free.

Watson, Dinah and René go in to the CDC and battle the Longbow Hunters, but when Diaz shows up, everything goes to hell. Kodiak and the Red Dart get out of dodge with Diaz, while no one knows where the Silencer ended up.

With the secret mission going belly-up, Watson gets shipped to a desk job in Washington D.C. for disobeying orders from her superiors as Felicity tells the agent she’s sad to see Watson go. But secretly, Felicity and René have captured The Silencer. It’s doubtful they’ll get anything useful from her, though, since it’s pretty early in the season and our heroes can be inept until at least the halfway-point.

And if you were looking for more on Oliver’s son, Wiliam, and Roy on the island in the future or the new guy in the Arrow costume (which are possibly connected), well, you’re shit out of luck here. They’re dragging that story out a bit.