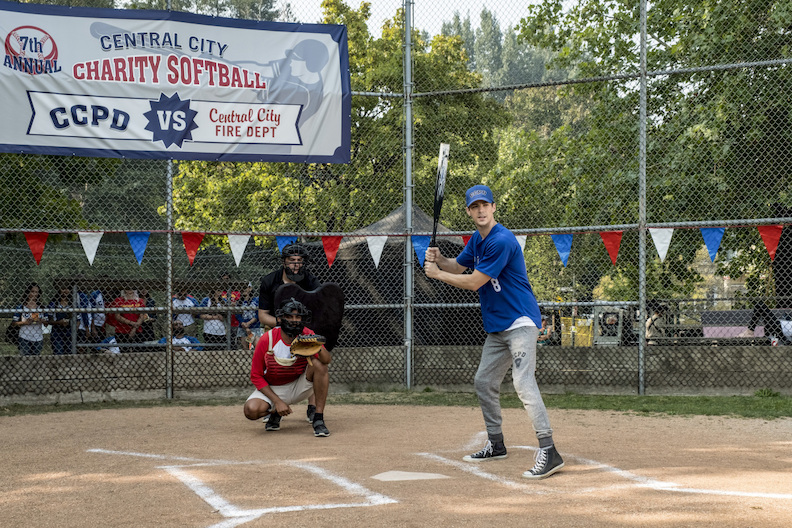 Fake news becomes real when the team faces against an opponent who can cause others to follow her commands.

With the threat of Cicada looming, Team Flash has a much more pressing engagement – the police vs. fire department charity softball game! Barry gets shipped out to right field because he’s a terrible athlete, despite his desire to play the hot corner at third.

During the game, one of the members of the Central City Police Dept. comes onto the field with a bomb in his bag, a plot that is thankfully stopped by XS. But Nora doesn’t remember doing anything or how she ended up in the outfield after she saved the day.

Turns out it was the work of Iris’s former coworker at the newspaper, Spencer Young, who now has an app called the Spin Zone, which Nora totally prefers to her mom’s blog. She’s a little obsessed with XS, since Nora saved her on the night of the ENLIGHTENMENT last season, after she helped her dad destroy the satellite. Spencer uses her powers to build XS up, including sending Barry away to Las Vegas while he and XS are putting out a fire at the newspaper and then tries to get Nora to kill her dad at a football stadium.

If not for Iris jumping in and knocking Nora out with a tranq dart, the daughter may have succeeded in killing her dad, and Barry quickly gets his bearings and grabs Spencer and puts her in cuffs.

It’s not a big challenge for Team Flash, but there are, of course, some complications along the way. The icy relationship between Nora and her mom, Iris, thaws a little bit when Iris helps Nora put the fire out, but we finally find out why Nora hasn’t warmed up to her the way she has to her dad: Iris apparently put a power dampener in Nora as a kid, causing her to not know about her powers until she was much older.

Sure, Nora has a right to be upset with her mom, but we have no idea why Iris dampened her powers. And Iris can’t answer that question, because she’s years away from actually doing it. That’s not good enough for Nora – is she supposed to be a teenager here? Because she’s certainly acting like one – who goes to her dad for back-up. And in the best move in the episode, Barry backs his wife up, saying he believes Iris did what she had to do.

Meanwhile, back at STAR Labs, Ralph helps Sherloque Wells try and track down Cicada’s identity and start to make some headway. Most interestingly, the battle with The Thinker last season not only sent Dark Matter that created some new meta-humans, but the explosion also caused the creation of meta-objects, including Spencer’s phone and Cicada’s knife.

Even after just one episode of their team-up, I think the Elongated Man-Sherloque team is going to be up there with Harry and Cisco as my favorite pairings on the show. Tom Cavanagh and Hartley Sawyer play off each other so well that I can already tell their scenes are going to steal the show a lot moving forward.

This was, in my opinion, my favorite episode of the season so far. The overall plot was advanced nicely while dealing with an interesting new villain, and everyone (except Cisco, who didn’t appear this episode) got a chance to shine. While we haven’t seen anything terrible so far this season, this was above and beyond everything else they presented in their fifth go-round.