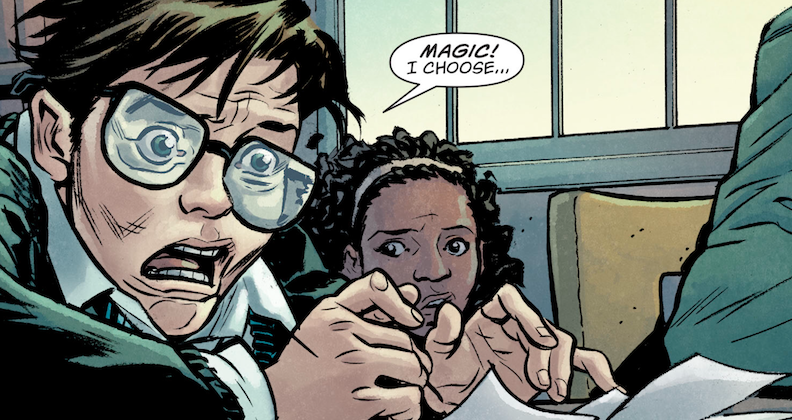 The famous boy magician – no, not that one, the other one – gets a new first issue to kick off a new era of stories.

Tim Hunter existed before HARRY POTTER became a worldwide phenomenon. Somehow, though, DC Comics and Vertigo never bothered to try and capitalize on the similar premises between the Potter-verse and Books of Magic to give Hunter a sustained series in the Potter era, though he did get a few mini/maxiseries here and there.

The latest series, spinning out of the new SANDMAN UNIVERSE imprint at VERTIGO, reboots Tim Hunter’s history as a kid learning about his destiny and navigating the perils of school. Like reading blank pages.

The first issue is little more than an introduction to Tim Hunter’s world and the people who inhabit it, setting the stage for what is to come. It’s the sort of story that would have been a 1/2 issue from Wizard magazine back in the day, which makes the $3.99 price tag a little hard to swallow.

Yes, the writing is good, and I think that the series has some promise to deliver some great new Hunter stories, but if you’re a fan of the concept, it may be best to skip this until the first story arc is put into a collected edition.