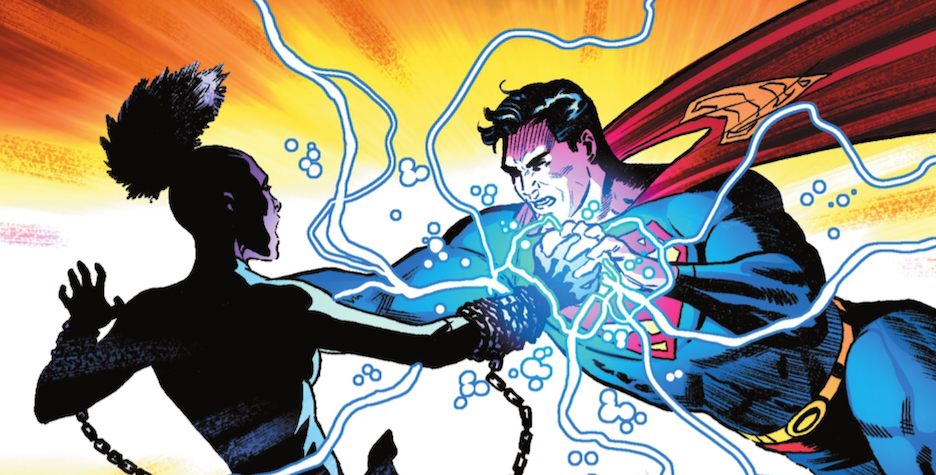 The new era of Superman comic books have all been leading to this moment.

The generational shift within DC Comics – which was supposedly not going to happen after the cancellation of DAN DIDIO‘s 5G project – is definitely moving forward. With the end of this issue, Kal-El is no longer the world’s greatest hero. He leaves Earth in the hands of his son, Jonathan, as Clark Kent heads off to challenge Mongul, the tyrannical ruler of War World, and free the myriad slaves he has on the traveling battle planet.

Superman spends the latest issue of Action Comics saying goodbye to his family and friends. There are touching moments of reassurance with Lois and the Justice League, balanced by the worry of his son, scared that he’ll never see his father again. This is the calm before the storm, allowing readers to take a beat before everything goes a little crazy.

As much as I enjoy a good interstellar Superman story, the build-up to this decision has me a little bit worried about the Man of Steel’s ultimate fate within the larger DC Universe. He’s been kicked out of the Justice League for his actions during the standoff between the United States Navy and the forces of Atlantis. His son is wearing the costume and calling himself Superman. And, of course, there’s Superman’s fate during the FUTURE STATE issues earlier this year, where he never really returned home from War World.

As a guy who’s loved the character of Clark Kent/Superman for all of his 40-plus years, it’s a little heartbreaking to see the process of casting him aside begin.

Between Action Comics and Superman’s formation of the DC Universe Authority to help him take down Mongul, this has been building for a long time, and I imagine Superman’s travels into space won’t end soon. Writer Phillip K. Johnson is clearly trying to build an epic story here.

Regardless of what it means for the larger Superman mythos – and I really hope we’re not leading to a DC Universe without Superman – I really enjoyed this issue. Johnson did a great job with the moments Superman spent with the people who are most important to him. Despite his reassurances that he’d be back and everything would be fine, the confidence was underscored by his need to say goodbye.

The world will always have a Superman. But now it looks like War World will have one, too. Hopefully they remember to give him back.

Back to the DCAU with Justice League Infinity