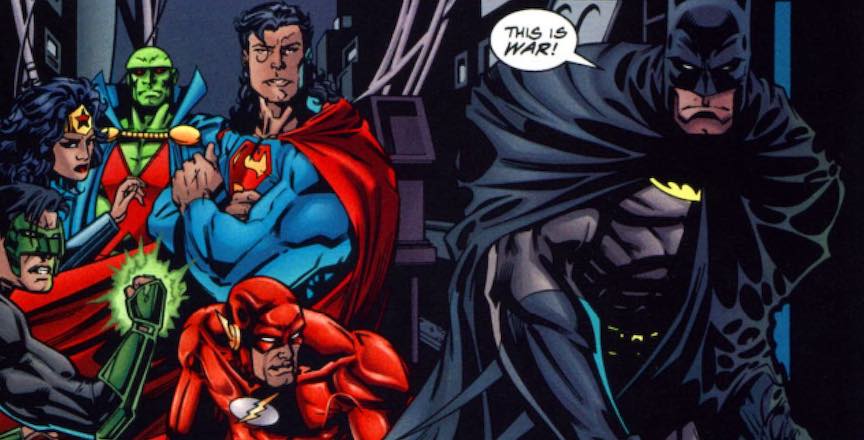 As we count down the days to the release of the JUSTICE LEAGUE movie next Friday, I am taking a look at some of my favorite Justice League stories (mostly of the post-Crisis on Infinite Earths era). Up first, Grant Morrison’s inaugural arc on JLA – NEW WORLD ORDER.

The Justice League of America was created to be DC Comics’ premiere super-team, featuring team-ups between it’s most well-known members that you wouldn’t see in their own books. Back in the Silver Age, continuity was a bit looser, so stories happened whenever you could fit them in. Couldn’t fit a story in? Easy – it was a dream, or an imaginary story, or it happened on a parallel Earth.

But when Crisis wiped out all those parallel Earths, and the average age of readers began to get higher, more discerning eyes placed a higher priority on where books fit in the larger scope of the comics universe. As such, editorial mandates began to require that certain members be left out of the super-group. Even before Crisis, the Justice League had turned away from featuring the company’s biggest names, instead focusing on who could be used at the moment. While the book saw a resurgence immediately post-Crisis with the Giffen/DeMatteis/Maguire JLI (More on that soon, I promise!), by 1995-96, the bloom was back off the rose, and the team again was a collection of C-List heroes who weren’t being used elsewhere to fill out the ranks.

And then came Grant Morrison… 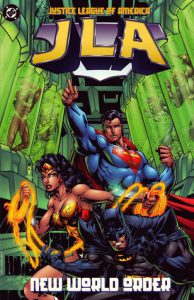 Following on the heels of JUSTICE LEAGUE: A MIDSUMMER’S NIGHTMARE, a three-issue miniseries written by Mark Waid with art by Fabian Nicieza that reunited the “Big 7” heroes and gave them the idea to form a team, Morrison took over on a new monthly book called simply JLA. Instead of lower-tiered heroes who couldn’t anchor their own book, Morrison’s team consisted of the “big guns”: Superman, Batman, Wonder Woman, Martian Manhunter, The Flash (Wally West), Green Lantern (Kyle Rayner) and Aquaman.

While I’m not sure Howard Porter’s art here stands the test of time all that well, it really does feel perfect for the story Morrison was scripting.

The first challenge to the newly-formed team was overcoming new heroes called the Hyperclan, who came to Earth and used some questionable methods to defeat villains, improve the environment of the planet and turn the people of the world against the JLA, which hadn’t even really officially come together yet. After getting kicked around for a few issues by the members of the Hyperclan, six of the 7 new members of the team are captured. The only one not in the grasps of the enemy is Batman, but only because they shot down a Batplane, which caught on fire, and the team leader, Protex, thought he was no threat because he was just a human with no powers.

Between Batman’s detective skills, Superman’s keen reporter’s eye and Martian Manhunter’s shapeshifting, they manage to figure out what they’re really dealing with: The Hyperclan are, in fact, White Martians, the warrior race that helped to do away with the Green Martians (like Martian Manhunter) and bring the planet to its ultimate doom. They came to Earth looking to finally conquer it, after sowing the seeds millennia earlier. Morrison even hints that human evolution was kicked off by a push from White Martians.

Once Manhunter, Superman and Batman throw the White Martians off guard and free the others from the Flower of Wrath, the JLA starts to work together to take down their captors and loosen the grip of their mind control over the people of Earth. At the team’s urging, Superman takes to the airwaves to tell the world to “Stand firm. Right now courage is all that can light this darkness!” Also, fire. Use fire. With a million Zippos and Bics lit up across the world, the invading White Martians are fought off and imprisoned by the Manhunter (spoiler alert – they’d be back eventually) and the new JLA celebrated by building a new headquarters on the moon.

The first four-issue story of the new super-team set the tone for the rest of Morrison’s run – big, widescreen action on a global or universal scale.