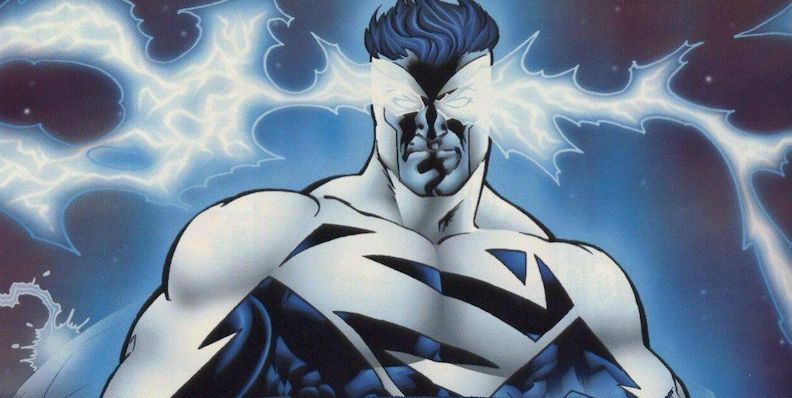 Now that the Geekery has completely moved into its new headquarters, it’s time to dive back in to the mailbag! Do you have a question that anyone can answer but you what to hear what I have to say, for reasons passing understanding? Send an email to thecasualgeekery@gmail.com! Or hit us up on Twitter, @Casual_Geekery!

Today’s question comes from my 4-year-old daughter, which gives me an opportunity to talk a little bit more about a strange time in my favorite character’s existence!

Daddy, why is Superman blue?

In the previous Geekery headquarters, standing on one of the shelves of my DVD/Blu-Ray rack were two action figures depicting the period of Superman’s life when his powers and costume were completely altered. Frequently referred to (at least by me) as Electro-Supes, the hero eventually split into two versions, Superman Blue and Superman Red, as an homage to a classic Silver Age imaginary story.

But what brought about this monumental change in the Man of Steel’s status quo? Well, most likely it was an attempt to boost sales for one of DC Comics’ flagship characters while also creating a collectible buzz around some issues of the four Superman comics, not unlike what happened with the DEATH OF SUPERMAN.

I’m not really sure it achieved any of the goals it set out to achieve.

The mid-to-late-1990s was a pretty hectic time for the Metropolis Marvel. After coming back from being killed by Doomsday, Clark Kent’s relationship (and engagement) to Lois Lane became a focal point of the four Superman books. Lex Luthor made a deal with the devil Neron to bring himself back to optimum vitality. Superman helped reform the JLA with the other big guns of the DC Universe. And then, in 1996, a Sun Eater latched itself to Earth’s sun and threatened the world with complete darkness and eventual destruction without a star to give it life. The Final Night crossover miniseries saw Superman lose his solar-based powers. But mysteriously, when the sun was restored by the sacrifice of Parallax Hal Jordan, Superman’s powers didn’t start to come back. He was, essentially, stuck as a human.

While powerless, and searching for answers on how he could restore his abilities, Lois Lane briefly called off their engagement, only to come back a short time later to finally tie the knot with Clark Kent, in an attempt to hold a wedding in a similar timeframe to the pair’s wedding on the ABC series Lois and Clark: The New Adventures of Superman.

This could have been a nice happy ending for Lois and Clark. The couple is married, Clark no longer has the responsibility of protecting the world because he no longer has his powers. But alas, the world needs a Superman, so he intensified his search for answers. But then a funny thing happened: his DNA started changing and Superman became a being of pure energy, forced inside a containment suit created by Dr. Emil Hamilton (using materials from Lexcorp). Superman’s classic power set was gone, replaced by abilities based in the manipulation of energy and electricity. He could shift his appearance between Superman and Clark Kent, he could read different waves of energy and he could ride energy waves to simulate flying.

During the Superman Blue time period, which officially began with Superman (vol. 2) #123 in early 1997, the new Man of Energy had to learn how to use his own powers while serving as the interim managing editor of the Daily Planet when Perry White went on medical leave to be treated for lung cancer. Not having superpowers when he phased into the role of Clark Kent, Superman began to feel like he couldn’t keep up with all the demands on his time and, eventually, split into two versions of himself: the calculating Superman Blue and the more brash Superman Red. The super-pair frequently clashed over how to handle problems, leading to a colossal battle against the world-ending Millennium Giants. In order to beat back the giants, who were awakened early by the changes to Superman, Red and Blue had to work together while also bringing in other heroes for assistance.

Red and Blue finally decided to sacrifice themselves to defeat the Giants, but fate (or, actually, the cosmic being known as Kismet), had other plans. As a thank you for saving the world again, Kismet restore Superman to one being and restore his original powers and Kryptonian DNA. The Electro-Supes era came to an end in the prestige one-shot story Superman Forever, just about one year after the saga began.

(This is, of course, a condensed explanation – from memory – of about 18 months of stories from more than 20 years ago, so if I missed something… well… I don’t know what to tell you.)

Anyone who was around and reading Superman and DC Comics during the Electro-Supes era probably doesn’t have a very high opinion of this time in Superman’s life. It was a gimmick that had very little force or effect on the overall history of the character and has been largely ignored since. While I enjoyed some of the stories from this era, I think Grant Morrison handled Electro-Supes best of all in the pages of JLA. In one of Electro-Supes’ first appearances with the new powers, Morrison had Superman using his abilities to turn himself into a giant to go hand-to-hand with the rogue angel Asmodel, in one of my favorite panels of the 1990s.

In the end, I think everyone was happy to see Superman back in his classic red, blue and yellow costume.

Rise and Cry: A Look at the Worst of DC Comics Part 12