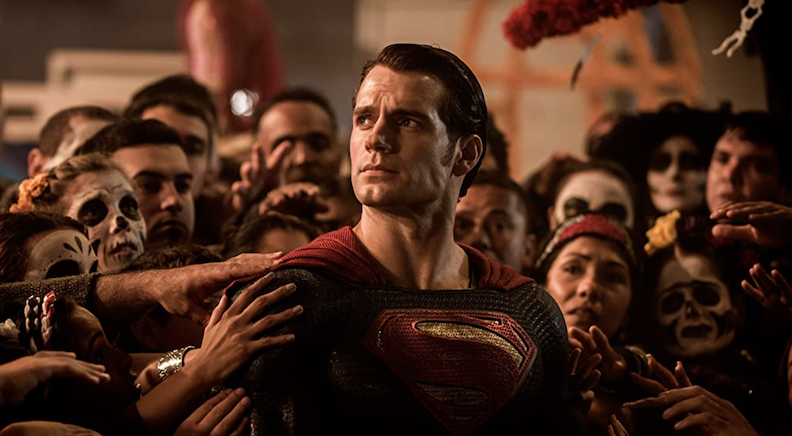 With JUSTICE LEAGUE: THE SNYDER CUT finally available to stream on HBO Max, it’s a good time to revisit the path we took to get to the big finale of the director’s tour of the DC Universe. Earlier this week, we looked at the opening salvo, MAN OF STEEL. Today, it’s time to revisit its follow-up, especially since it’s the fifth anniversary of the film’s release in theaters.

(Editor’s Note: This review was written when the Blu-Ray, with the extended director’s cut, was released, with a fresh coat of paint.)

Through all the negative advance reviews and the questionable information that was put out about this movie in the weeks and months before it was originally released, I tried to look on the bright side and think positively about it. I REALLY wanted to like this movie. It’s Superman, Batman and Wonder Woman sharing screen time together, live action! How could it POSSIBLY be bad, right?

I didn’t think it was bad, actually. I didn’t even hate Batman v. Superman. But I was certainly disappointed in what should have been an amazing cinematic experience, both for me and for millions of comic book fans out there. But instead of the classic characters we’ve become used to over the last 80-plus years, we got an Elseworlds tale, where things are slightly changed from the characters and the stories we’re used to.

What was different about this particular corner of the DC Universe? If you look at movie’s predecessor, Man of Steel, you can see where everything went wrong with this Earth: Clark Kent’s father, Jonathan (played by Kevin Costner), was incapable of teaching his son how to be not just a man, but a hero. In most versions of the mythos, Jonathan and Martha Kent are Clark’s moral touchstones. They teach him to be respectful of everyone, to value all life and that he was delivered to them, to Earth, with a grander purpose to help everyone. Director Zack Snyder made a point of showing us that his Clark Kent didn’t have that. This Clark Kent’s parents were afraid of losing Clark, and taught him to hide who he was instead of making every effort to lead people into the light.

And if you consider this new Superman under these conditions, well, it starts to make more sense. Superman is a beacon of hope, a waypoint for what humanity should strive for, maybe not physically but in his ideals. A Superman movie should be showered in light and Superman, though serious, should have a sense of fun to him. Zack Snyder’s Superman has been, in two movies now, dour and depressed. That’s not Superman, at least not to me.

Unfortunately, that IS the Superman we get in Batman v. Superman: Dawn of Justice, the movie that’s meant to kickstart the DC Cinematic Universe (or the DC Extended Universe, as I’ve seen online). I don’t think I recall seeing Henry Cavill’s Superman smile once in the movie. Think back to images of other actors as Superman: George Reeves, Christopher Reeve, Dean Cain, even the new Superman on the CW show Supergirl, Tyler Hoechlin. They ALL smile.

Really, it’s all downhill from there.

The SECOND biggest problem with Batman v. Superman: Dawn of Justice is the length. No, not of the title, although that’s also problematic. But the theatrical release of the picture clocked in at 2 and a half hours. The Director’s Cut extended the movie to just about three hours. The movie jumps all over the place and can never really decide what it wants to focus on. Cavill’s Superman and Ben Affleck’s Batman take divergent paths to their battle, and it just takes too long to get there. But they felt the need to make sure that all the members of the upcoming Justice League were introduced in the movie. That decision really hurt the pacing of the film.

Yes, the visual of Batman standing in the desert overlooking Darkseid’s Omega symbol and an Earth filled with firepits was amazing for a long-time comics fan, but it did nothing for the narrative established in the movie.

The other thing that hurts the movie was that the story they told was more apt for a fourth or fifth film in the overall DC Comics franchise, once they’ve established Superman as a beloved hero and Batman as a feared vigilante. When Superman died at the heads of Doomsday in the 1992 “Death of Superman” comic book storyline, there was emotion there, we felt for this hero who we grew up with and the ancillary characters who lost a friend, a partner and a son.

When Superman dies at the hands of Doomsday in Batman v. Superman, the emotion doesn’t come from the events of the movie. When Bruce Wayne tells Gal Gadot’s Diana Prince at Clark’s funeral that he “failed him in life” but won’t “fail him in death,” a commanding line falls flat because the only thing given to the audience as a connection for Batman and Superman is that both of their mothers were named “Martha.” They fought alongside each other out of necessity when Doomsday attacks, but there’s usually more complexity to an adult friendship than, “Hey our moms have the same name? COOL!”

Cut out about half an hour (of the theatrical cut) and keep the focus on the story of Lex Luthor pitting Batman against Superman, and the movie is probably a lot better than what we got. But the dour tone of the DC Extended Universe is really what has hurt both Man of Steel and Batman v. Superman.