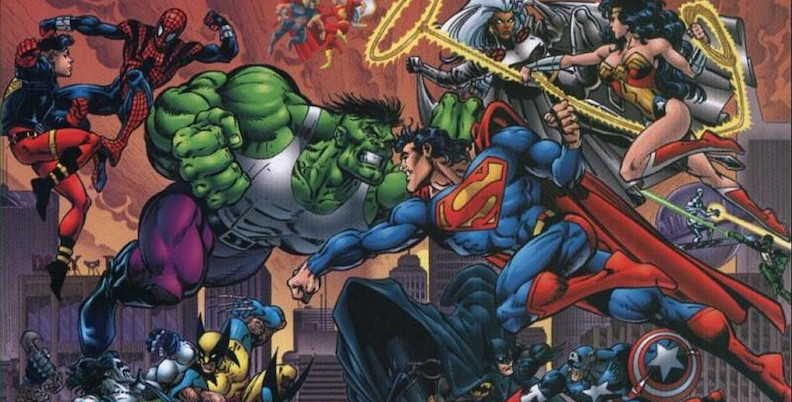 Now that the world is a slightly calmer place, it feels like a good time to finish off the list some of my favorite DC Comics miniseries, answering a question from friend of the Geekery Kenny. Do you have a question that anyone can answer but you, for reasons passing understanding, want to hear what I have to say? Send an email to thecasualgeekery@gmail.com! Or hit us up on Twitter, @Casual_Geekery!

Once again, we’re going all the way to the 1990s and back to the recent past for this final installment. Be sure to check out the three previous entries to see the full list. Part 1 is available HERE; part 2 is HERE; and part 3 is HERE. We start our final list with a major crossover event.

Probably the biggest inter-company crossover that’s happened since I started reading comics, DC vs. Marvel pitted the heroes and villains of the two universes against each other to determine who was better. Two cosmic brothers battle, with the fate of one of the universes at stake. The miniseries spawned the Amalgam universe, which gave us some amazing combinations between DC and Marvel characters.

Reading a story where Superman fought the Hulk and Batman battled Captain America is likely not something we’ll see again any time soon. As silly as much of this crossover was (Lobo losing to Wolverine? Wonder Woman losing to Storm? C’mon, son), it’s enough of an event that the silliness is worthwhile.

Fresh off the success of Batman: The Long Halloween, Loeb and Sale next turned to the other half of the World’s Finest. Superman For All Seasons is a 4-issue miniseries, another story that examines Clark Kent’s transformation into the guardian of Metropolis and how he came to be the hero the world would look up to.

Unlike The Long Halloween, which was a winding mystery that drew in all of Batman’s various supporting characters, For All Seasons was a much more personal story, filled with little moments that built on the legacy of Superman. It’s one of my favorite stories about Clark Kent and his world.

A fun 6-issue miniseries that followed a teenager named Finster, who works in a comic shop. Fanboy spanned various eras and genres as Finster day dreamed about being a hero and fighting alongside Superman, Green Lantern, Wonder Woman and others to overcome his shortcomings.

Fanboy is the type of book we don’t see very often, and certainly DC Comics hasn’t done something like this in a while.

An ELSEWORLDS story set in the 1940s, The Liberty File takes Batman, Hourman and Doctor Mid-Nite and makes them covert government agents hunting down the Joker for information on Germany’s secret weapon.

The two-issue Prestige format miniseries got a sequel in 2003 – The Unholy Three – which were all collected into one edition. Another story, THE WHISTLING SKULL, with writer B. Clay Moore, was released in 2012. All three miniseries are great reads, though I felt the third volume was the weakest of the bunch.

Another story set in the 1940s, the three-issue miniseries is based on the story from one of the old Adventures of Superman radio serials, where the Man of Steel took on the Ku Klux Klan and exposed their secrets to the world. The updated story is another set early in Superman’s career, where he’s still learning who he is and what he’s capable of, an alien in a world that fears the other.

Superman defends a Chinese-American family from white supremecists who want to drive them out of the Metropolis suburbs. The story speaks to the sins of the country, which unfortunately still permeate today. Yes, good triumphs over the evil of the time, but it’s unfortunately not a complete victory. The evil still exists, though hopefully less powerful with each passing generation.