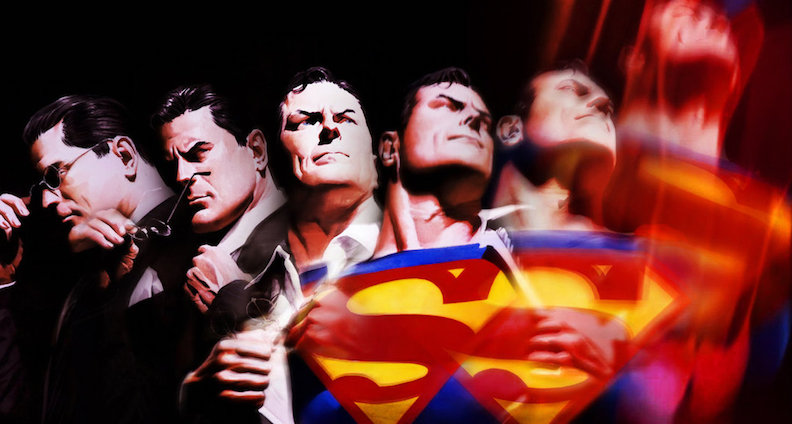 Anyone who knows me knows that Superman holds a special place in my life, so today – NATIONAL SUPERHERO DAY – is a special day to celebrate the Man of Steel! Up, up and AWAY!

Superman was created by Jerry Siegel and Joe Shuster and debuted in Action Comics No. 1 back in 1938, a vigilante hero crusading for the rights of the downtrodden. Over the years, he evolved from the world’s first, best-known social justice warrior into the greatest hero in the DC Comics Universe, a hero everyone can admire. His symbol, the red and yellow S-Shield, is one of the most recognizable images in the world, right up there with the Coca-Cola logo and Mickey Mouse’s ears.

Growing up, my grandmother would read me Superman comics and it started a lifelong love and appreciation of the character. I even discussed my history with Superman when I appeared on NPR’s Ask Me Another podcast! You should take a listen to see how badly I lost there!

While he may have lost some of the popularity that he enjoyed in the 1940s and 1950s, Superman is still one of the most important characters that DC Comics publishes, and many of the greatest stories in comic book history have involved Big Blue.

To celebrate NATIONAL SUPERHERO DAY – a day designated by rival Marvel Comics in 1995 – I thought I would take a look at some of my favorite Superman stories.

One of the first books I remember owning, in a treasury-sized reprint edition. DC Comics’ champion and the heavyweight boxing champion of the world were kidnapped by aliens and pitted against each other in a boxing match. The classic story was reprinted a few years back in a hardcover edition, and also inspired a two-figure set by NECA.

Whatever Happened to the Man of Tomorrow? (1986)

As DC Comics celebrated 50 years of publication, they planned a giant mega-event – Crisis on Infinite Earths – to wipe the slate clean and give fans an opportunity to start reading stories of their favorite characters right from the beginning. Before Superman got a reboot in the classic Man of Steel miniseries by John Byrne, they needed to close out his Silver Age stories.

British writer Alan Moore, who would go on to prominence writing WATCHMEN for the company, was given the opportunity to write “the last Superman story,” where all of his villains gathered in a final gambit to finally defeat Superman. After an attack at the Daily Planet that revealed his dual identity as Clark Kent, Superman gathered his allies – Lois Lane, Lana Lang, Jimmy Olsen, Perry White and his wife Alice – up to the Fortress of Solitude, where he hoped to protect them and hold a last stand against his worst villains.

The final scenes of the two-part story, which appeared in Superman No. 423 and Action Comics No. 583, is a touching tribute to the hero, as a new version was about to take flight.

One of the most well-known Elseworlds stories – tales set outside the regular DC Comics continuity – was the story of a future world, where Superman had gone into hiding after the death of Lois Lane at the hands of the Joker and public sentiment turned against his brand of heroism. Instead, a new generation of heroes who didn’t have the same values rose to “protect” the world.

The four-issue miniseries by Mark Waid and Alex Ross showed what happened in this future world when Superman decides to come back into prominence and how he struggled to make things right after the damage his absence caused.

Alex Ross’ iconic drawings of the Man of Steel and his super-powered compatriots left an indelible mark on comic book fans, while Mark Waid’s story pulled at the heartstrings, as Superman fought to remember what made him the world’s greatest hero. The battle with Captain Marvel, in particular, is one of the best superhero fights you’ll ever see.

Capitalizing on the success of Jeph Loeb and Tim Sale’s classic Batman miniseries, The Long Halloween, the team took on the Man of Steel in this four-issue prestige miniseries that traced the hero from his origins in Smallville to his never-ending battle for truth, justice and the American Way in Metropolis. The collected edition is one of my favorite stories and I frequently use it as a gift when trying to give people an understanding of the character.

After spending the previous year as a being made of pure energy, Superman Forever returned Kal-El to his traditional costume and powerset – just in time for his 60th anniversary! The very comic booky “cosmic forces” was given credit for bringing the classic look back and not a single person seemed to care because the “Electro-Supes” era had clearly gone on way too long. The issue featured a cover by Alex Ross with a variant that had a lenticular cover showing Clark Kent ripping open the shirt and flying off to face a new challenge.

The issue is especially poignant to me, since the letters column in the back of the book featured a letter from yours truly, in a master class of sucking up. I was even awarded a “Baldy Award,” the Superman comics version of Marvel’s No-Prize, though I never actually received anything in the mail. That was disappointing. But it was still cool seeing my name in print. You know, before I embarked on a journalism career where that happened frequently…

A multi-part summer crossover, Emperor Joker saw Batman’s archenemy trick the fifth dimensional imp Mr. Mxyzptlk into giving the Joker near omnipotent power. Not surprisingly, the Joker uses this power to make himself the ruler of the world, twisting the heroes into absurdist versions of himself. He also uses the power to torture Batman, who is killed nightly. Superman and his allies – including Steel and Superboy – rise up from their Joker-created nightmares, with a little help from a remorseful Mxy, to set the world right.

Superman: Emperor Joker isn’t a story arc that gets a whole lot of love – it took DC Comics years to finally put the story together in a collected edition – but it’s one of the most fun story arcs of the time.

Easily one of the most celebrated Superman stories of the last 20 years, All-Star Superman was a 12-issue miniseries by Grant Morrison and Frank Quitely, which told of the last days of the world’s greatest hero, and how Superman would react when he found out he was dying of prolonged solar overexposure. From a jailhouse interview with archnemesis Lex Luthor to giving Lois Lane superpowers for a day, every issue was a love letter to the history of Superman and what he means to the world.

Brainiac has always been one of my favorite Superman villains, as all of his various incarnations have featured a great design and a unique challenge for the Man of Steel. Whether he’s a Coluan seeking to capture various lifeforms, an ancient Kryptonian artificial intelligence or a street performer named Milton Fine, Brainiac has always been one of Superman’s most unique villains.

In this story – part of Geoff Johns’ run on Action Comics – the alien menace shows his true form to Superman as he comes to Earth looking to add more to his collection. Superman, though, manages to defeat the menace and free the captured Kryptonians from the bottled city of Kandor. The heart-wrenching tale features the death of Superman’s adopted father, Jonathan Kent, and leads in to the Superman: New Krypton story, which sees the Kandorians looking for a world to call their own.

The story was adapted into an animated movie, called Superman: Unbound.