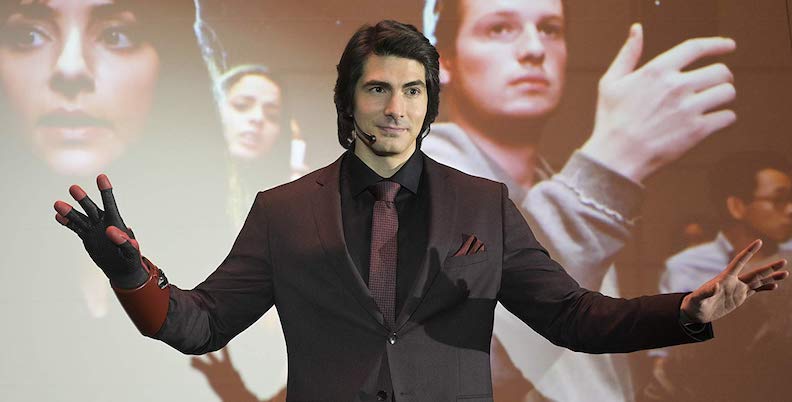 From here on out, I’ll be sending the user agreements for all tech I use to a lawyer and a priest, to make sure I’m not committing myself to an eternity in hell. Somehow, I feel like the lawyer and the priest may cancel each other out.

That’s the kicker for this, the penultimate episode of LEGENDS‘ fourth season: Neron, in a bid to take hell over from the Triumvirate, has created an app that allows people to report monster attacks so Neron – in the form of Ray Palmer – can take them down. Within the app’s terms of service is a clause that says the user will give their souls over to Neron in hell. It’s a perfectly evil thing to do, considering no one ever reads those things. They’re 100 pages long! Who has that kind of time?

And, really, what have I already legally given up when I’ve signed on to iTunes, Facebook, or anything else that made me click “AGREE” before I used it?

Unfortunately for Neron, only 2,000 people have downloaded the app, which won’t get him the kind of respect he craves, so he plans to use Charlie, the shapeshifter, as any number of different monsters as part of his scheme to get more people to download the app. That’s certainly one way of going viral.

With John Constantine in Hell trying to save the actual Ray Palmer, the rest of the team is split between trying to foil Neron’s plans and trying to humor Time Bureau Gary, who is using Tabitha the Fairy Godmother to fulfill his heart’s desires to be a member of the team. Tabitha wants him to condemn them all to hell, but Gary is thinking a bit further ahead than Sara and Ava as he puts them through a ridiculous series of tasks that does nothing but annoy everyone.

Tabitha, on the other hand, manages to trick Nora Darhk into taking on the mantle of Fairy Godmother under the ruse of saving Mona. But once she agrees, it turns out Nora can’t do anything, because Gary hasn’t willed it so. Instead, Gary unwittingly sends Nora to hell to bring back Constantine and Ray. Sara and Ava finally come to see what Gary was doing and let him know that he is, in fact, part of the team.

Constantine is going to need all the help he can get, because he gets double-crossed by the Triumvirate when he agrees to leave Ray in hell in exchange for Astra, the young girl whose death put him in the mental hospital at the start of his own NBC series. It’s nice that the three rulers of hell got to put one over on John, since he is frequently making a mockery of them in the comics.

(If you haven’t read Garth Ennis and Steve Dillon’s classic HELLBLAZER: JOHN CONSTANTINE story “Dangerous Habits,” I definitely recommend that you do – it informs so much of the Constantine character!)

And now we’re all set up for our final battle. And I’m finally ready to watch the season finales of all four ARROWVERSE shows! Stay tuned!