Arrow S7x22 – You Have Saved This City 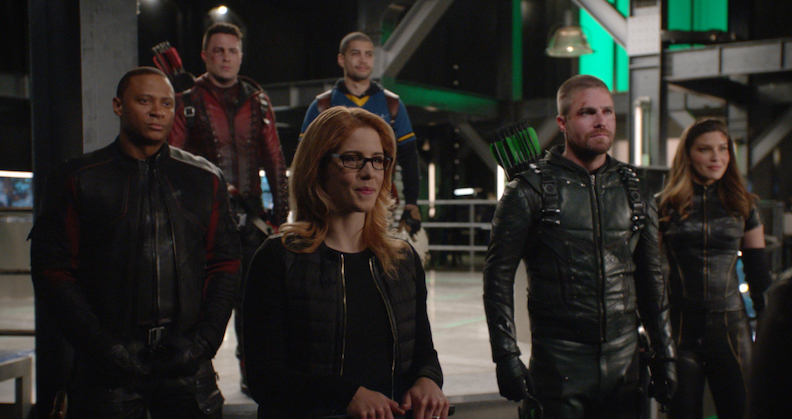 After Oliver spent the whole season fighting the Ninth Circle, his sister and, at times, the city he’s spent the last seven years defending, it all comes to an end here. The final confrontation with Emiko, as Team Arrow works to contain the bioweapon she stole to tear down Star City and destroy her brother.

Compared to some of the series’ past season finale battles, this one was a little less than epic. Oliver gets a little help from Mr. Terrific, Black Siren and Bronze Tiger, who all work to clear a path so he can confront Emiko to try and “break the cycle of violence” his family has been involved in. Man, his time being brainwashed by the prison shrink at the start of the season really stuck with him.

Even though she really wanted to watch Oliver and Star City suffer, her half-brother manages to get through to him. Of course, it helped that the Ninth Circle got tired of her vendetta against Oliver and turned against her. That kind of betrayal is good for bringing families together.

The fight with the Ninth Circle was costly, though. They manage to kill Emiko before the rest of Team Arrow and the Star City PD manage to take down the secret mystery international organization.

Oliver may have saved his city, but the threat of the Ninth Circle still loomed, so Oliver and Felicity decide to hide out off the grid until things are safe for them, leaving Star City in the hands of Spartan, Black Canary, Wild Dog and possibly Arsenal.

This would have been a great close to ARROW if they had decided to end the series here. Star City is safe and Oliver and Felicity are off in a secret location raising their daughter and talking about getting shared custody of their son. Everybody’s happy! It’s a perfect ending!

Wait… there’s still time left in the episode. And there are still promises Oliver has to keep.

The Monitor comes back after he made a deal with Oliver in the ELSEWORLDS crossover to collect. He needs Oliver to help him make preparations for the coming CRISIS ON INFINITE EARTHS. The series will return for a 10-episode eighth season that will tie into the big crossover, and I am pretty primed to see where they go from here.

ARROW has been the more grounded of the ARROWVERSE shows, leaving the fantastical to the other shows, but if Oliver is jumping from world to world next season, those final 10 episodes are going to be a pretty stark contrast from the other 7. We’re already losing Felicity and, most likely, a chunk of the rest of Team Arrow, so I’m interested in what the season brings to the table.

But we already know how it ends, thanks to the Monitor. Oliver dies in the Crisis. At least, that’s what he tells Oliver during his recruitment speech. That may need a little work. In the end of the episode, though, we see what really happened, as he takes Felicity into a pocket dimension to see Oliver, echoing a scene from the comic book CRISIS where the Golden Age Superman and Lois Lane are saved from the destruction of the rest of the Multiverse.