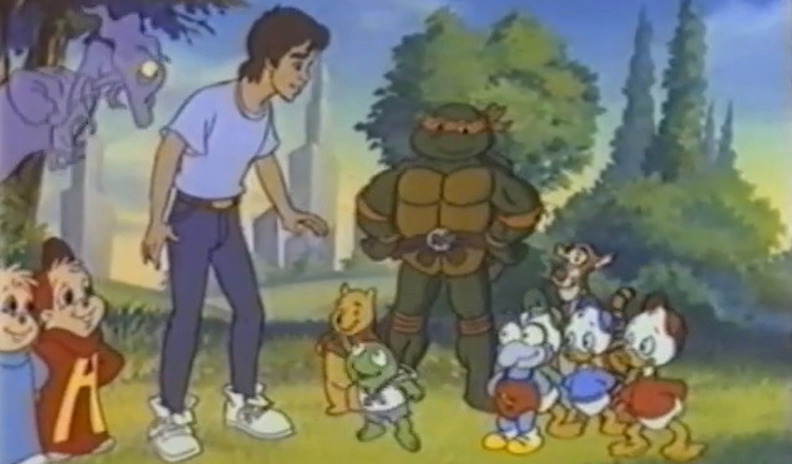 The War on Drugs may have started with Nancy Reagan on DIFF’RENT STROKES, but the battled continued into the Presidency of George H.W. Bush, who enlisted the aid of Saturday morning cartoon stars!

On April 21, 1990 all four major networks aired an animated special called CARTOON ALL-STARS TO THE RESCUE, a cartoon featuring characters from 10 different Saturday morning cartoon franchises coming together to teach kids about the dangers of drug use. Financed by McDonald’s, the special followed a young girl who was concerned about her brother’s substance abuse problem, after her brother steals her piggy bank to use to buy drugs.

The nefarious action brings the cartoon characters located in the girl’s room to life and make it their mission to teach her brother that drugs are bad and that he needs help to stop. It’s delightfully tacky in ways that only a 1990 PSA hiding as a cartoon special could be.

Which “Cartoon All-Stars” were involved with this special? We had the animated version of ALF, Alvin and the Chipmunks, The Smurfs, Muppet Babies, Looney Tunes, Slimer from the Real Ghostbusters, Winnie the Pooh and Tigger, the nephews from DuckTales and Garfield all taking part in this altruistic adventure. It’s probably a good thing GI Joe wasn’t involved… Some of those “military outfits” could only have been dreamt up by someone on drugs.

Of course the special is on YouTube, complete with a special introduction from President George H.W. Bush and his wife, Barbara (rest in peace).