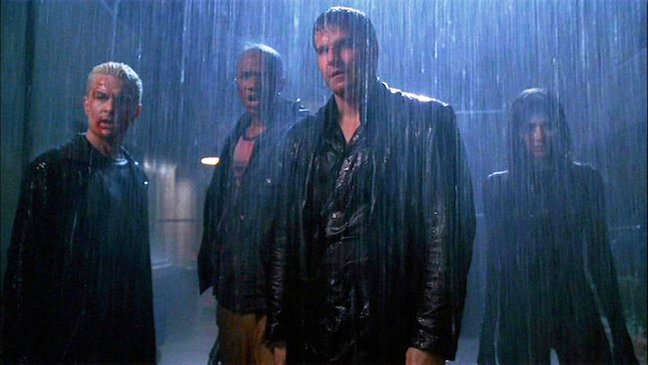 The launching of the WB Network on January 11, 1995 may not have revolutionized broadcast television, but it certainly left an indelible mark on pop culture for the decade-plus that the network was in existence.

Starting out with half-hour comedies one night a week – with a lineup that included Sister Sister, The Wayans Brothers and Married with Children rip-off Unhappily Ever After – it took WB Network executives a couple of seasons to realize that they needed to carve a different niche out for themselves. But once they discovered the formula, the network managed to create a number of properties that became must-see programming for an entire generation of TV watchers.

Many of the shows that originated on the WB Network from 1995 to its end in 2006 remain close to the hearts of many fans and have found ways to live on, even close to two decades later. I cannot believe how old typing out that last sentence made me feel.

Basically a reimagined TV sequel to Joss Whedon’s 1992 cult classic film starring Kristy Swanson and LUKE PERRY, BUFFY THE VAMPIRE SLAYER was the WB Network’s first big hit. The show’s popularity was such that in 1999, Buffy’s love interest ANGEL, a vampire with a soul trying to do good in the world, got a spinoff series.

Despite being cancelled after the fifth season, BUFFY moved on to UPN (which would eventual merge with the WB to become the CW Network) for another two seasons, while ANGEL lasted five seasons on the WB and would have continued if not for Whedon’s demand that the network give him an early renewal order, which they weren’t prepared to do.

Once Buffy and Angel were off television, the legacy of the series continued with comic books from Dark Horse, adding to the characters’ stories starting with where the shows ended. Most recently, BOOM! Studios have released new comics, reimagining BUFFY and her friends for the 21st Century.

And, of course, there’s always talk of a new TV series.

Arguably the standard-bearer for the WB Network, Dawson’s Creek redefined (or maybe even just defined) what an hour-long teen drama could be. Ostensibly about high schooler Dawson Leery (James Van Der Beek) and his group of friends in a small town in Massachusetts, the show quickly started to shift its focus to star-crossed lovers Joey Potter (Katie Holmes) and Pacey Whitter (Joshua Jackson). Joey and Pacey were Dawson’s best friends, and their eventual coupling really showed how little the show needed the would-be filmmaker to be interesting and probably should have renamed itself just The Creek, or Joey’s World.

All these years later, the show is now on Netflix and I find it pretty hard to watch. Not because the show is bad or particularly dated. No, I just can’t get past the opening credits, which has replaced the iconic “I Don’t Wanna Wait” from Paula Cole with another song that’s just not as good.

Focusing on the years Clark Kent spent before he became known as Superman, Smallville began as a show somewhat disconnected from the larger Superman mythos. As the series went on, though, and Clark Kent came closer and closer to fulfilling his destiny, the show managed to incorporate more and more of the world Superman would eventually inhabit.

The success of Smallville brought along another DC Comics-based property. Birds of Prey was unconnected to Smallville and set in a future Gotham City where Batman had disappeared and his daughter and her friends battled the machinations of Harley Quinn. BoP didn’t connect as well as Smallville did and was cancelled after a season.

The show would outlive the Network, eventually moving over to the CW. When Smallville eventually ended, the CW would eventually green-light another show based on a DC Comics character, ARROW, which would lead to the shows that now comprise the ARROWVERSE.

The WB Network did a lot to change the television landscape, mostly through giving teen and young adult viewers an outlet for dramas, along with showing the renewed viability of superhero TV, all of which continues through to the modern age.

What were your favorite WB shows? Let us know in the comments!