Here’s Looking At You, Kid 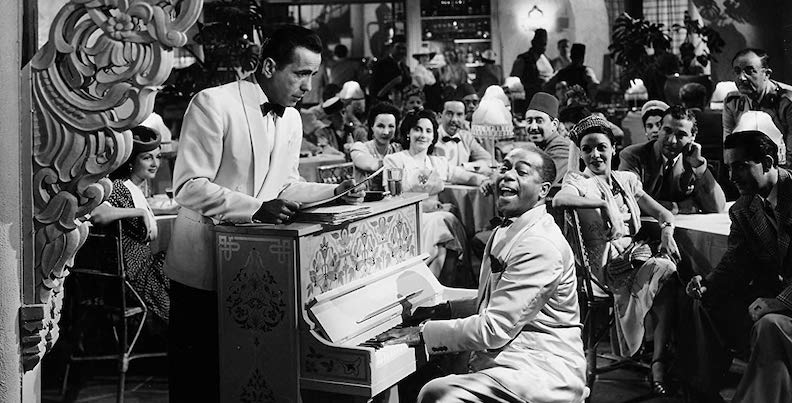 Consistently voted as one of the greatest films ever made, CASABLANCA had its debut at the Hollywood Theater in New York City today in 1942.

Based on an unproduced stage script called “Everybody Comes to Rick’s,” and directed by Michael Curtiz, CASABLANCA won three Academy Awards – for Best Picture, Best Director and Best Screenplay. The film’s enduring success, however, was not something the stars of the film foresaw. According to legend, the film’s three main stars repeatedly tried to get out of the film because they thought so little of the production. Humphrey Bogart (who played the lead, Rick Blaine) and Ingrid Bergman (Ilsa) both thought the film’s dialogue and situations were ridiculous, while Paul Heinreid (Victor Laszlo) was displeased with what he considered playing a supporting role in the film, despite his being billed along side Bogart and Bergman. He also apparently thought Bogart was a hack.

But the incredible talent in CASABLANCA lifts the film beyond its ridiculous dialogue and situations and provided the world with a love story for the ages, and one of the most quotable movies of all time.

When the American Film Institute put out its list of the top movie quotes, CASABLANCA had six quotes on the list, more than any other film. From “Here’s looking at you, kid” at number 5 to “Of all the gin joints in all the towns in all the world, she walks into mine” at number 67, to any number of other quotes from the film not on the list, many film aficionados would be able to have whole conversations using quotes from the film.

I love watching this film, and I think it absolutely stands the test of time and rewatchability. Maybe I’ll go watch it again now.