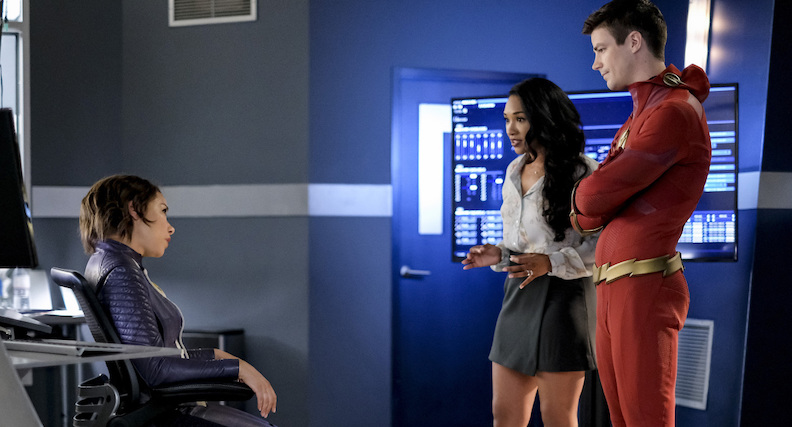 Team Flash goes up against its most disturbing meta villain yet as Iris continues to try and connect to her future daughter, Nora.

After a random week off, we get the episode I’ve been dying to see since its “freak of the week” was announced this past summer. Rag Doll may not be a major player in the comics, but I was definitely curious to see how he was portrayed in live action, and I was definitely not disappointed.

But before we get to Rag Doll, let’s get all the other stuff out of the way.

Team Flash’s chase against Cicada is put on the backburner this week, as we only get a brief scene with Sherloque Wells setting the radius of where Cicada was created and Cisco putting The Thinker’s satellites online to get their eyes and ears back. The team also advances a little on finding Caitlin’s father, showing that he knew about her Killer Frost alter ego. We’ve had some steady forward movement with this each week, and the mystery of Caitlin’s dad got more air time than Cicada here, so look for either a big revelation or a resolution soon.

And of course we have some more West-Allen family drama, with Nora still mad at her mom for Iris’ actions in the future. At this point, I completely understand Iris’ decision to dampen Nora’s powers as she was growing up, because even as an adult (is she an adult? How old is she supposed to be), she’s kind of impulsive and reckless. When she helps her dad foil an art heist, she nearly lets a motorcycle hit an old couple crossing the street. Clearly they didn’t look both ways. Thankfully, Barry saves them.

Nora has replaced Iris as my least favorite character on the show, though she makes some gains this week with her interactions with Cecille, who tells Nora stories of her mom (masked as stories about Barry) to give her a little bit of perspective. The best part about Nora’s little temper tantrums, I think, is Barry backing his mom up instead of trying to stay out of it to keep Nora from being upset with him.

Since Iris is still taking Nora’s attitude to heart, Barry tries to get her mind off of it by having her team up with him to figure out the strange burglaries going on in Central City. And thus, Rag Doll enters our television lives.

The criminal is able to contort his body to get through little cracks and crevices, hide himself in small boxes and escape even the tightest of spaces. And his movements are portrayed with the most jarring sound effects of bones creaking and crackling. With the Jigsaw-like mask he wears, every scene he’s in is completely unsettling.

While the Rag Doll character dates back to the Golden Age – fighting the Flash back in 1942 – the version of the character we get here was introduced to the world by writer Gail Simone and artist Dale Eaglesham in 2005, used mostly in Simone’s supervillain team of SECRET SIX (currently being developed as a TV show for CBS – it’ll be on the CW the following season, no doubt). Simone and Eaglesham get a nice shoutout as an intersection in Central City where Rag Doll can be found.

I’ve enjoyed the Rag Doll character in the comics, but Peter Merkel is used to much greater effect in this episode. It probably helps that Rag Doll isn’t played for laughs here, instead being treated as a horror movie big bad with the way he pops up in scenes.

Merkel manages to capture Barry and put him in a pair of power-dampening cuffs, tied to a chair at the top of a high-rise. Iris and Elongated Man go to save him, but Rag Doll just pushes Barry off the building. And here’s where the episode gets a little silly.

Iris leaps off the building with a key to the cuffs, catches up to Barry, who is still tied to the chair, and unlocks her husband in time for him to get his powers back and save them both from going splat. Nora sees her mom’s ridiculous sacrifice and maybe she doesn’t think Iris is so lame any more. But Nora’s young, so who knows…

And what about Rag Doll? No, he doesn’t get away. Ralph eats him. I think. Whatever Ralph did, getting Rag Doll stuck in his esophagus probably isn’t good for his digestive system.

I really dug this episode, mostly because of much I enjoyed the presentation of Rag Doll. Though it says something about the current Big Bad that I cared not one whit that we saw nothing of him in this episode. They have a lot of work to do to make Cicada feel like big deal. I don’t know how we’re going to get through this season if Barry doesn’t feel the need to try and get faster to solve everyone’s problems.