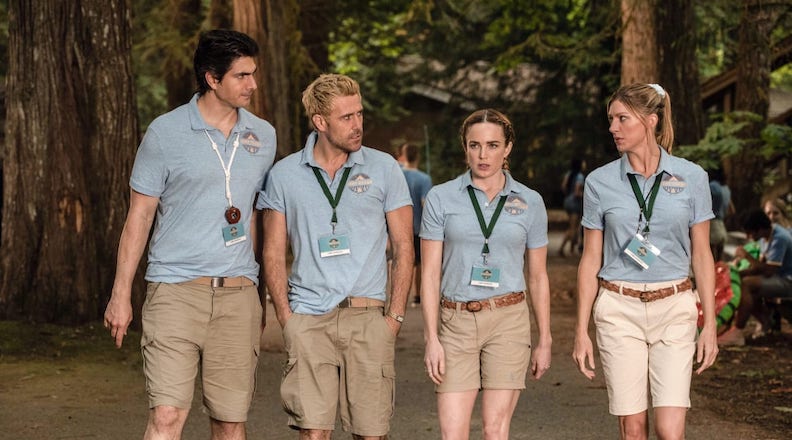 There’s something about summer camp that just elevates the level of action, suspense and comedy in movies and TV shows. I don’t know what it is. I’m not even sure why I enjoy it so much; I never went to summer camp.

But maybe that’s it. Summer camp is supposed to be a rite of passage for kids and teenagers and that’s why there’s such a romanticism around the idea of summer camp that brings out the best in the writers who go back there. Just like the writers of this episode of LEGENDS OF TOMORROW.

The Legends are drawn to a camp because of a horror movie that Sara and Ava consider watching – Swamp Thaaaang – that’s supposedly based on a true story that no one had ever heard of happening. So the team heads to camp to figure out the mystical threat that’s killing kids.

When Ava and Sara find out the name of the movie that sets this whole mission off, I was really hoping that this episode would have a cameo from a certain representative of The Green. Sure, Constantine mentions him in the episode, but with the DC UNIVERSE streaming service debuting a new Swamp Thing show next year, it would have been nice to have a back door pilot right on one of the best superhero shows on television.

Alas, it was not to be, but that doesn’t mean the episode was a disappointment. The Legends go to the summer camp and become counselors to try and get information from the kids. Even Constantine, who is forced out of his trademark trench coat and tie against his will in exchange for a T-shirt and shorts. Well, for a while, anyway. He eventually says bollocks to it all and puts it all back on.

Watching the Legends interact with the kids was simply perfect. Ray gets to nerd out and Sara relates to them while she looks for information. And Ava, who never had a childhood of her own, acts like a dictator trying to protect the kids by putting them on lockdown. After the kids pull a prank on Ava and get her to fall in the lake looking for the killer, Sara convinces her to take a potion to turn them both into kids.

The team is eventually helped by the shapeshifter from the last episode, who’s stuck in the guise of their former partner, Amaya. She tells them the kind of demon they’re dealing with and Constantine and the mini versions of Sara and Ava kick its ass. The Legends prevail and get a new/old teammate in the process. But Nate still doesn’t know that they have someone who looks like his ex-girlfriend on the Waverider.

Of course, there’s always a cost for success. The spell Constantine used to save the kids the demon had abducted leaves him near death. Ray offers to reach out to Nora Darhk for help, though no one thinks that’s a great idea. But considering she’s seen acting as a witch at a Renaissance Fair, she’d probably be willing to do anything else with her time.

Episodes like this one are why LEGENDS has been my favorite ARROWVERSE show for the last couple of years.