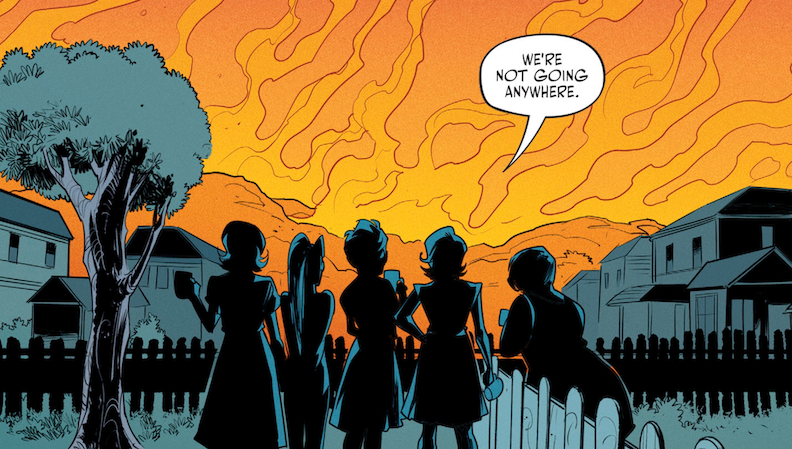 A new series from VERTIGO looks at the war between witches and their hunters, and the shocking turn it takes in the modern day.

It’s been a while since I’ve picked up the first issue of a new VERTIGO series – the current SANDMAN UNIVERSE books notwithstanding – but there was something about this one that intrigued me enough to give it a shot.

The war between witches and their hunters has gone on for centuries, and we get glimpses of some of the confrontations. Isadora and her soulmate, Nadiya, have battled generations of men who have hunted them because of their abilities. Throughout the years, the men have failed, until the modern era.

In the modern era, the current scion of The Architects has a new plan: use the magic that has defeated them time and time again against the witches. They trapped the witches… and made them their wives.

They all live on a cul-de-sac and live lives of quiet desperation as their husbands leave them every morning to go to their jobs. And they can’t leave, because they have no idea that they can, or that they should. They used to be witches and now they’re just housewives, keeping their homes clean, making dinner for their husbands and making sure they have everything they need.

It’s a concept that worked well for Jeff Lemire with BLACK HAMMER, and that book was on my mind a lot as I read this first issue. The difference is there’s less of a mystery here than there is in that book. We know who did the deed, all that’s left is to see how it all plays out.

There’s a lot of good in this first issue. The writing is sharp and engaging and the art is beautiful. The first issue of HEX WIVES drew me right in to the world of Isadora and Nadiya and their coven of witches and the men with whom they have been at war for centuries. There’s a lot of potential in this book, and I really hope this book gets the chance to fulfill it.