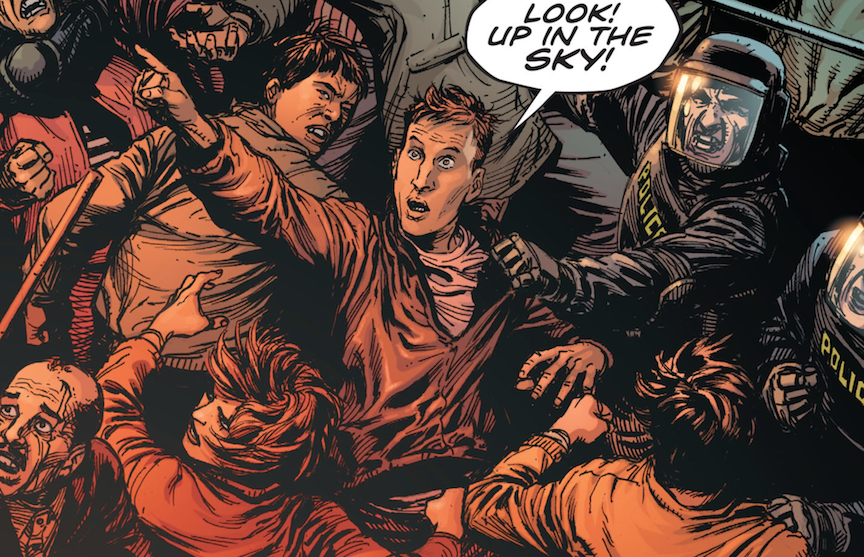 The second issue of DC Comics’ much-anticipated maxiseries, The Doomsday Clock, brings the characters from Watchmen into the main DC Universe, bringing some light to where we’re going in the next year.

Well, as the saying goes, “business is about to pick up.”

After catching up last issue with the state of the universe Alan Moore left behind at the end of Watchmen, the story shifts to the main DC Universe, as Ozymandias, the new Rorschach and the villains Marionette and Mime do some dimension hopping in Night Owl’s ship. Ozymandias has tracked Doctor Manhattan and he wants to appeal to whatever is left of his humanity to bring him home to help save the world.

Given the nuclear missiles that went off as the ship popped over to the other side. President Redford seemed like such a good idea at the time…

More troubling for Ozymandias, his plan involves using these two to help convince Manhattan of his humanity.

Once they make it over, Ozymandias handcuffs the two criminals and plots with Rorschach to split up and try and convince this world’s two smartest men, sending Rorschach to confront Bruce Wayne while he visits Lex Luthor. The mysterious man in the mask gets some pancakes before coming face to face with Batman, but the Luthor meeting doesn’t go quite as planned. The ending gives us our first surprise appearance of the miniseries, as The Comedian – killed in issue 1 of Watchmen – shows up shooting at the smartest men of two worlds.

The issue also introduces the concept of The Supermen Theory in the info dump at the back of the book, questioning why so many superheroes populate the U.S. Given that THE DOOMSDAY CLOCK occurs one year into the DCU’s future, I’m sure we’ll be hearing more about that as the other comics DC publishes go forward. The concept, though, explains why the citizenry of Gotham City seem to be turning against Batman (It’s a popular concept lately, like in the miniseries BATMAN: WHITE KNIGHT).

The second issue gives us the WOW moments of character interactions, but we’re still building to even more. Mime and Marionette have escaped from their handcuffs; Rorschach and Batman are about to get into it and how the hell is the Comedian alive and well on Earth-Prime? Johns is doing a great job of mimicking Moore’s pacing with a slow build, with each issue adding on to what came before.

I really am looking forward to having this collected into one volume, because it will be so much better to binge-read the whole story, but so far both issues of the series have delivered. Now that we’re in the DCU proper, with countless other heroes and villains waiting in the wings. Given that this whole thing has built around a confrontation between Manhattan and Superman – who we really haven’t seen in action yet – things should start to get even more exciting now.