It’s Day 2 of the All-Star Event, the last professional League of Legends tournament of the year! 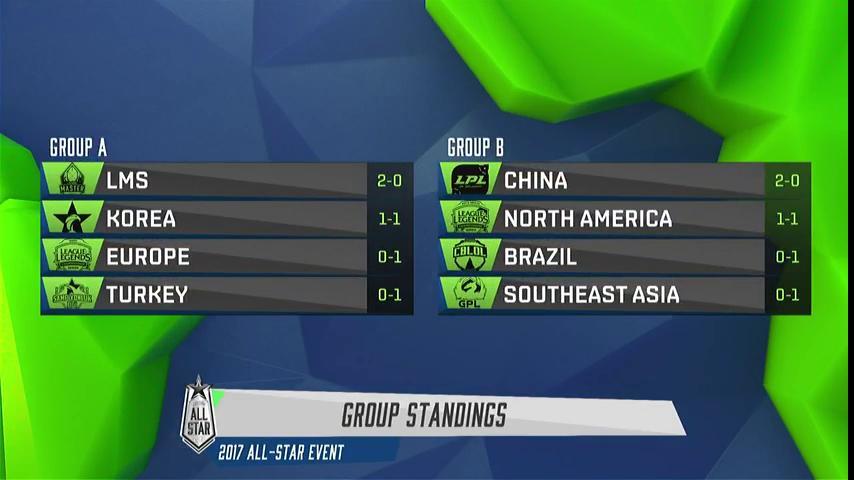 Europe vs Turkey
Europe pulls off a crushing win over Turkey.

The European All-Stars take down the Turkey All-Stars to kick off day 2 at #AllStar2017! pic.twitter.com/64mjDXfReg

North America vs Southeast Asia
NA puts up a good fight, but SEA stays just a bit ahead all game.

Levi secures Baron for Southeast Asia and Dantiz follows up with a Double Kill! #AllStar2017 pic.twitter.com/u5ePAdr2GQ

North America is struck down by Southeast Asia!

Europe vs LMS
Europe put up a good fight, but LMS dominates, with a crushing blow down the mid lane. LMS defeats Europe and go 3-0 in group stage! Watch out Korea, I’m still rooting for you, but these guys mean business!

The LMS All-Stars win the final team fight, take down Europe and go 3-0 in the group! #AllStar2017 pic.twitter.com/DnrZY6yvdw

Brazil vs Southeast Asia
This match went pretty even and both sides put up a great fight, but in the end SEA had a conquering play in the mid lane and rushed the nexus to win!

The Southeast Asia All-Stars take down Brazil and secure the #2 spot in Group B! #AllStar2017 pic.twitter.com/qqddioi2cZ

Korea vs Turkey
This was a ridiculously mismatched match. Turkey just didn’t stand a chance. Faker only went down at the very end of the game under Turkey’s fountain as the nexus was being demolished. I guess he was ready to take out yesterday’s single loss on something! Korea won by a landslide!

The LCK Superstars take down the Turkey All-Stars and finish the group stage 2-1! #AllStar2017 pic.twitter.com/PthgorzXRh

China vs Brazil
China brings out a crushing win. Brazil was already having a bad two days with only losses, and this game sealed their fate. China closes out their group stage undefeated and ready to take on semi-finals!

China take down Brazil and remain undefeated in the #AllStar2017 Group Stage! pic.twitter.com/sfuP0yPfGj

Oh dear, looks like China and Korea are going to face off in semi-finals! I was hoping they’d both make it to the finals for a really interesting match, but I guess now I have to bet against China who has been really spot-on through group stage!

Don’t forget to check out what went on at Day 2’s 1v1 tournament here.

Make sure to check out my Day 1 team match post and the Day 1 1v1 tournament post. For more posts about this tournament, check out my posts on my website, and follow me for more musings on games and other antics. Sign up for free to play League of Legends.