Visions of Vertigo – The Sandman 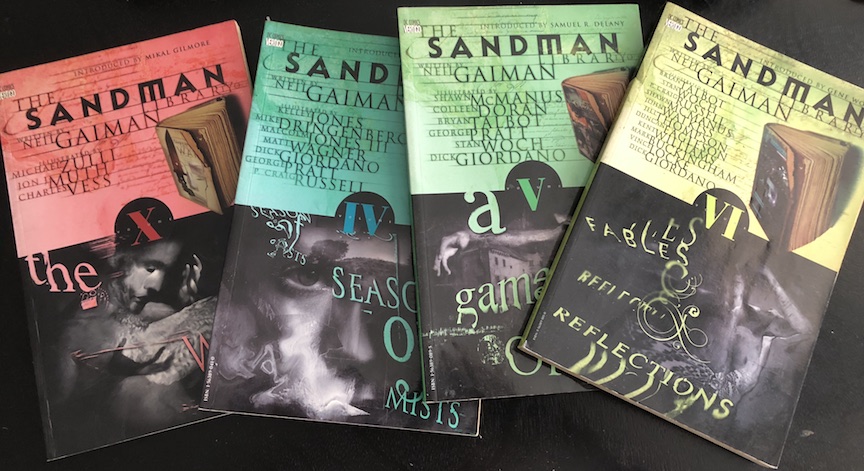 For decades after the debut of Superman, comic books were all about men and women in tights fighting to save the world or the universe from the forces of evil. When DC Comics debuted its VERTIGO imprint in 1993, it completely changed the shape of the comic book industry.

On my shelf of graphic novels and collected editions, Vertigo takes up a good chunk of the comic books I own. Many of the amazing stories that have come out of the imprint have proven to be iconic and eminently re-readable. The art is frequently groundbreaking and the words on the page are nothing short of extraordinary. With today being Halloween, I figured we should take a look at what is arguably the imprint’s greatest accomplishment.

The final installment (for now) of VISIONS OF VERTIGO will look at Neil Gaiman’s greatest creation and the larger universe it spawned.

Like ANIMAL MAN and HELLBLAZER, THE SANDMAN was created at a time before Vertigo. Neil Gaiman was a journalist trying to break into the comics field as part of the wave of British writers DC Comics was bringing in. Originally a proposal to revamp the Jack Kirby Sandman and his supporting cast, Gaiman was told the characters were being used in Roy Thomas’ Infinity Inc. But eventually Vertigo head honcho Karen Berger asked Gaiman to keep the Sandman name and build a new character and a new world around it. The writer instead created a vast universe that has spun off into numerous series, and produced many of Vertigo’s most popular characters.

THE SANDMAN‘s first issue debuted on November 29, 1989 and began the story of Morpheus, also known as Dream, a member of a family of the personifications of life essences known as The Endless. As the series opens, Dream was being held in captivity by a mage who had hoped to trap Death, and the first story arc covers Dream’s quest to regain the artifacts he lost while being held, along with his power. The first few issues were steeped in DC Comics lore, using supervillain Doctor Destiny as an antagonist and including a cameo from members of the Justice League. Those ties certainly did not bind Gaiman or his collaborators, and when the second story arc started, Gaiman instead focused on building the Sandman’s universe. Though, as the story wrapped up, more DC Comics characters would make cameo appearances.

Earlier this year, Dream made a surprising appearance in the DARK NIGHTS: METAL miniseries, the first time the character appeared in a proper DC Universe book since a two-issue appearance in JLA in the late-1990s.

The 75-issue run of THE SANDMAN, which made the jump to Vertigo when the imprint was created, explored Morpheus’ realm of The Dreaming, and how it affected the waking world. Gaiman’s story took readers on Dream’s journey to understand his role in the universe and how his choices led him him to his ultimate fate. Each of Morpheus’ decisions moved him closer to his final confrontation in The Kindly Ones arc. Gaiman paid off even the smallest of story points, sometimes years later, as every story beat led somewhere in the grand scheme of things.

While the series ended in 1996, Gaiman returned to tell the beginnings of Morpheus’ story in 2013 with The Sandman: Overture, which explained how Dream ended up in a position to be captured at the start of the series. 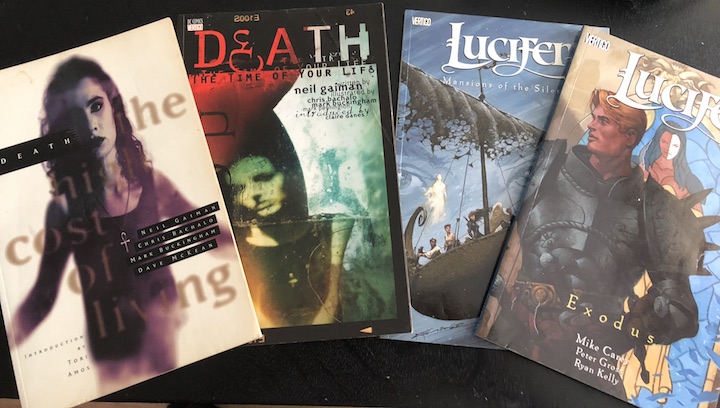 Along the way, Gaiman created characters that would spin off into stories of their own. Minor characters like the Dead Boy Detectives and Thessaly got miniseries of their own. The residents of Dream’s realm – Merv Pumpkinhead, Matthew the Raven, Eve and others – were featured in THE DREAMING.

THE SANDMAN‘s version of LUCIFER – the Lord of Hell who abdicated his throne to Morpheus to find a new path – became the star of his own series, which had its own 75-issue run starting in 2000. The book, written by Mike Carey with art by Peter Gross and Ryan Kelly, explored the concept of free will and the Morningstar’s battle against the idea that all of creation must follow God’s path. 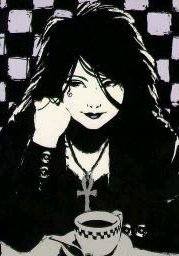 The most popular character that spun out of THE SANDMAN was his older sister, DEATH, who was introduced in the series’ eighth issue. Defying the conventional portrayal of Death as a frightening figure, Gaiman’s Death is a perky goth woman, dressed in all black and wearing an Ankh around her neck. In the main series, Death served as a sounding bored and trusted advisor to her younger brother.

Gaiman wrote two DEATH miniseries – DEATH: THE HIGH COST OF LIVING in 1993 and DEATH: THE TIME OF YOUR LIFE in 1996 – which further explored her world.

Without THE SANDMAN, the fate of the VERTIGO imprint is likely vastly different, as the series gave VERTIGO a certain critical flare. The book became popular among not just comic book fans, but permeated into a much wider audience, giving DC Comics a critical and commercial hit that continues to be recommended reading even today.