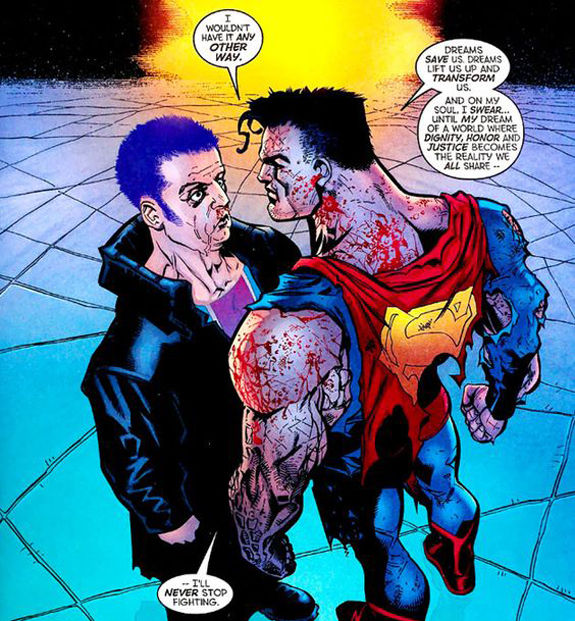 As Rebirth seeks to set things down a new, yet familiar, path for DC Comics, we have the opportunity to meet characters again for the first time. Last week, a Superman villain created more than a decade ago made his return, and I am very excited about that.

The final page of last week’s SUPERMAN shows that Manchester Black has been pulling some strings around Hamilton County to cause some problems for Superman – by taking control of young Jon Kent. Turning the son against the father is a pretty classic villain move.

The character is a powerful telepath and telekinetic, who was also charismatic enough to convince others to follow his lead.

Manchester clearly has a beef with Big Blue, but this is the first time he’s gone up against Superman in a very long time. So, where does Black’s problem stem from?

What’s So Funny About Truth, Justice
and the American Way?

Manchester Black made his first appearance in a DC Comics story in Action Comics 775 from early 2001, created by writer Joe Kelly and artist Doug Mahnke. His superteam, known as The Elite. The team used violent measures, including killing supervillains, a tactic that gained the support of a lot of people who were sick of supervillains who kept coming back. The team was supposed to be a take on The Authority, a team where loss of life wasn’t as important as getting the job done, even if it means killing the bad guys.

This did not sit well with the Man of Steel, who set out to prove to Manchester Black and the world that The Elite’s way of doing things was wrong, that being a hero means not killing and not giving in to your base instincts. The whole encounter with Manchester Black and the Elite is contained in the single issue, something that is not done anywhere near as often today. The battle between Superman and the Elite sees Big Blue take down the bad guys, seemingly using their own methods, and Black starts calling Superman a hypocrite. But it was all a ruse, as Superman tricked Black into thinking that he killed the Elite. This does not sit well with the Brit but Superman doesn’t really care.

The story in the issue of Action Comics 775 was adapted into a direct-to-home-release DC Animated movie, Superman vs. The Elite.

After a vital appearance during the OUR WORLDS AT WAR crossover in the summer of 2001, Manchester Black reappeared to try and vex Superman in 2002 during a crossover tale between all the Superman books. The British bad guy went on a full-frontal assault against not just Superman but his alter-ego Clark Kent. Black went after the people in Kent’s life, convincing Superman that his wife, Lois Lane, was dead. Black wanted Superman to kill him, to prove that sometimes, that’s what you needed to do. Again, Superman refused, proving that not matter what, Superman wouldn’t kill.

Superman’s steadfast resolve destroyed Manchester Black’s spirit, and his second defeat at the hands of the Man of Steel was too much for him to handle. Black saw himself as the hero of his story, but after this encounter with Superman, he realized he had become the villain, and in response, Black killed himself, firing a telekinetic pulse into his brain.

Post-Flashpoint, Manchester Black appeared in Teen Titans, as a VIP at STAR Labs who was trying to gain the trust of the team for his own needs. Despite reading all his appearances in the New 52, I have almost zero recall about what he was trying to do, because writer Scott Lobdell was simply incapable of coming up with a memorable storyline.