Rise and Cry: A Look at the Worst of DC Comics Part 5 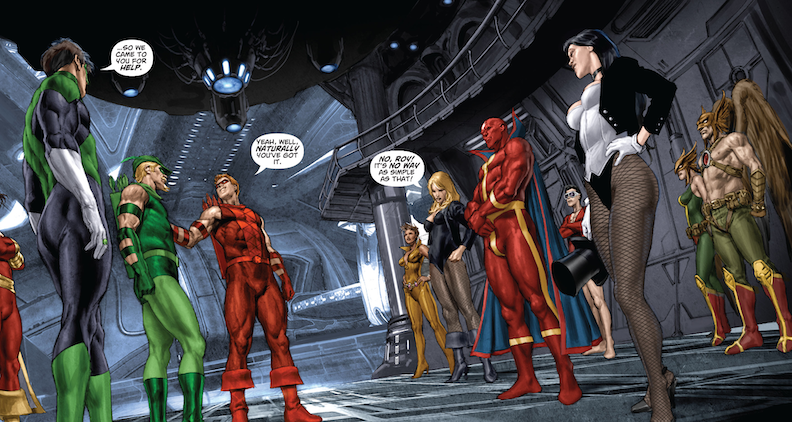 How bad can it get?

Last month, in a MAILBAG question, friend of the Geekery Kenny asked me if The Rise and Fall of Arsenal – the 4-issue miniseries from 2010 – was DC Comics’ “lowest point.” There’s no better way to examine that question than by going issue-by-issue of that miniseries and the one from which it was birthed, Justice League: CRY FOR JUSTICE.

In the fifth issue, things go from bad to worse.

This is it. This is the turning point, where the miniseries takes a significant turn towards the kind of darkness and insanity that DC Comics has wanted since Maxwell Lord blew out Ted Kord’s brains in the Countdown to Infinite Crisis special. The good guys don’t always win. Sometimes they get there arms ripped off.

But before we get into the fairly dark turn this issue takes, writer James Robinson and artist Mauro Cascioli would like you to ogle some young female superheroes in bikinis. Why? Because why the hell not.

There’s literally no narrative reason for Donna Troy and Starfire to be coming out of a pool at Animal Man’s house, other than to give Cascioli the chance to draw them barely clothed. This is a prime example of DC Comics playing to the worst stereotypes of comic book fans of the era.

Amazingly, that’s only one of the offensive parts of this issue.

In addition to Starfire and Donna, Starman Mikaal Tomas and Congorilla show up at Animal Man’s house, looking for help as they try and track down Prometheus. Animal Man agrees to bring them up to the Justice League satellite and Starfire and Donna agree to tag along once Congorilla promises not to kill PROMETHEUS. Thankfully, the women have their costumes with them before they head into space.

Meanwhile, Golden Age Flash Jay Garrick is discussing the villain’s plan to distract the heroes with attacks from unfamiliar villains with a man who knows something about villainy: sometimes evildoer The Shade. The mysterious Shade has been more neutral than anything since Robinson’s acclaimed run on Starman, but he’s still a guy who’s killed a lot of people. Regardless of his willingness to help with the situation with Prometheus, Garrick should be a little more wary about just inviting the guy up into the Justice League satellite!

Things like that are why that place keeps getting wrecked, by the way. I bet Batman wouldn’t allow it had he not be killed/sent backward in time by Darkseid during the (not-so) Final Crisis.

While we wait for Jay to bring a known supervillain into the heroes’ headquarters, the satellite is the site of in-fighting and betrayal as the heroes start to show up. Coming back to where we left off LAST ISSUE (though Barry Allen has mysteriously disappeared from the satellite) Hal and Ollie are asking for help with Prometheus. While Roy Harper is all about it, Black Canary puts a stop to it, feeling betrayed by Oliver for leaving for weeks. When things finally cool down enough for Roy to try and slip away to say goodnight to his daughter, Animal Man’s crew shows up.

Congorilla immediately sense something is wrong with his heightened gorilla senses and finds Harper, missing half of his right arm and with some pretty bad scarring to his face.

That kid really can’t catch a break. Between the drug addiction, this and then ultimately being killed by one of his best friends in HEROES IN CRISIS, Roy Harper’s life has definitely not been an easy one.

When the heroes finally come to their senses and realize this happened in their headquarters, they eventually find a very angry-looking  CAPTAIN SPARKLYFINGERS Junior on the attack. Has the Power of SHAZAM gone over to the dark side? Or has the Wisdom of Solomon finally kicked in and made Freddy Freeman realize that everything about this story is terrible?

I guess we’ll have to wait for the next installment to find out!