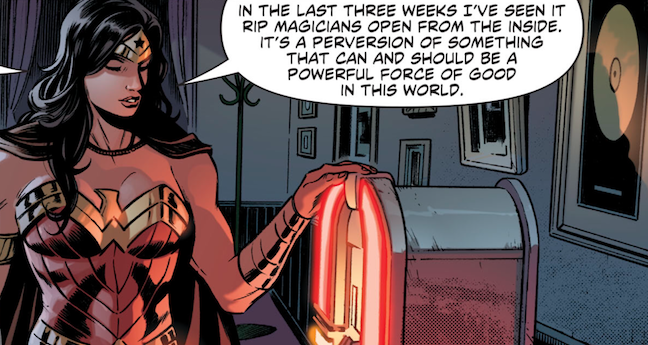 It’s New Comic Book Day and, according to the DC Universe app, it’s Wonder Woman Day! So we should have a big selection of new Wonder Woman stories to read today, right?

Well, not so much…

In yet another example of the right hand not knowing what the left hand is doing at a large corporation, the digital marketing team at the soon-to-be altered app have made a decision that doesn’t seem to be backed up the editorial release calendar. It’s only, after all, the 79th anniversary of the character’s first appearance.

To make up for it, let’s take a look at the trailer for the WONDER WOMAN movie sequel, which is due out at Christmas.

We’re not completely devoid of Wonder Woman this week, though. At the very least, we get the release of the latest DC Digital Comic Book, Wonder Woman: Agent of Peace.

Speaking of the DC Digital Comics releases, the on-again, off-again nature of these releases seems to be on again, as I have 5 digital-first comics in my pull this week. It would be a pretty slow week for comics for me otherwise, so I appreciate having some more to read.

This DC Comics-heavy week is anchored by two DARK NIGHTS DEATH METAL tie-in comics: the latest issue of Justice League and a special looking at Robin King. The Bat-heavy month of books continue (it is Halloween time, after all) with the first post-100 issue of BATMAN and a special 75th issue of NIGHTWING.