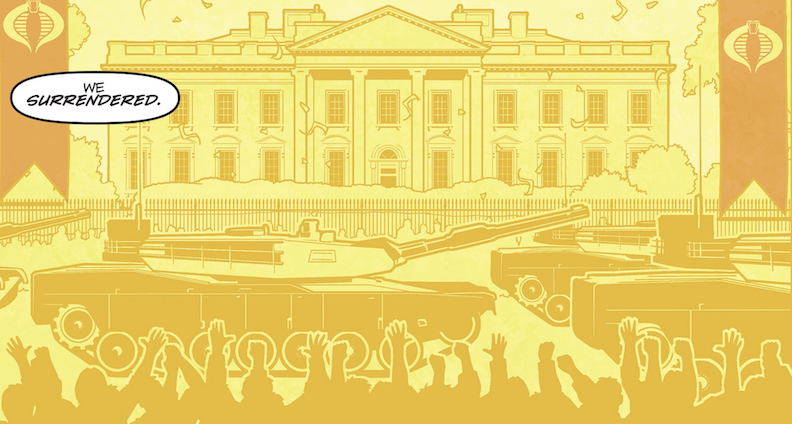 It seems like IDW has created a new continuity for G.I. Joe every few years or so, separate from the Larry Hama-written REAL AMERICAN HERO book, which continues the story of G.I. Joe from the 1980s Marvel comic. There’s always a new first issue on the horizon with a new story and a new-look Joe team.

I think this one is my favorite so far.

Writer Paul Allor won me over when he did the first CLUE miniseries for IDW in 2017, and his treatment for the new G.I. Joe series is a modern take on the characters. The United States is at war with Cobra Command and instead of a “highly-trained special mission force,” G.I. Joe is a clandestine organization using the talents of ordinary citizens to run operations of civil disobedience against the enemy.

But that changes by the end of the first issue, when word comes down that the United States has surrendered to Cobra.

Allor introduces a couple of new characters into the mix this issue. That’s important, since he establishes early on that this will be an actual war and there are going to be casualties on both sides.

I definitely wasn’t expecting to see Major Bludd blow Duke’s brains out before the story even started its narrative, but it’s a great move. The loss of one of the Joe’s usual field commanders means that anything can happen in this world. And that’s certainly hammered home when Cobra takes over the United States.

The new take on one of my favorite childhood properties has me very excited. I can’t wait to see where this story is going, which Joes are integrated into the narrative and how different they are from the characters i know.