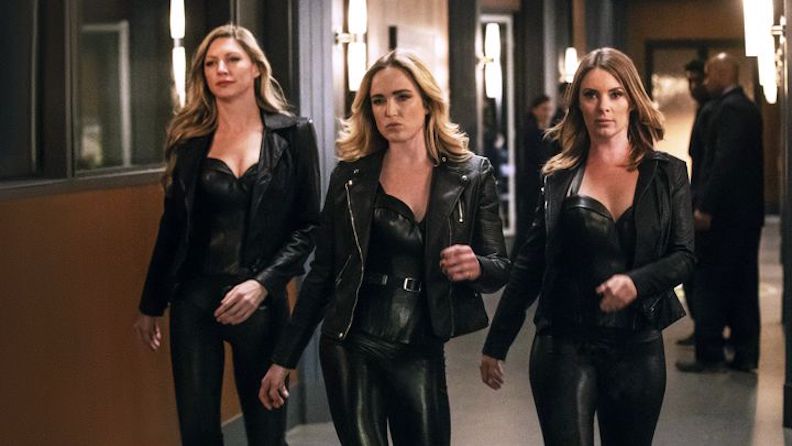 The Legends don’t need to deal with a crazy Book of Destiny for history to rewrite itself. They can ruin the timeline all on their own!

Previously on LEGENDS OF TOMORROW...

While the rest of the ARROWVERSE is wrapped up in the ELSEWORLDS crossover, the Legends take a “hard pass” on the annual team-up. Which is probably good, because Constantine seems to have really made a mess of things when he tried to save his boyfriend Desmond last episode. And every time Constantine and Charlie try to fix things – and bring Zari back from her new cat existence – they only manage to make things worse.

From the Custodians of the Chronology to the Sirens of Space-Time, each “fix” brings about different dead teammates and new attitudes from the ones that managed to live.

The trips to fix the problems with the timeline bring us back through the fights the Legends have had this season, from the Fairy Godmother to the unicorn at Woodstock, calling back to some of the fun moments the team has had so far. The situations got a little bit more ridiculous, but it all works within the confines of the show.

Considering the show is going on hiatus until April – when the rest of the ARROWVERSE comes back next month – it was a bit of a disappointing end to the first half of the season. And it felt more like an episode of COMMUNITY where the show was being self-referential. The puppets kind of helped that comparison… It works better here than it would for, say, ARROW, but it’s a letdown when you consider what the other shows were doing this week.

Maybe some time off is what the show needs to jump back into the groove it was in during seasons 2 and 3.