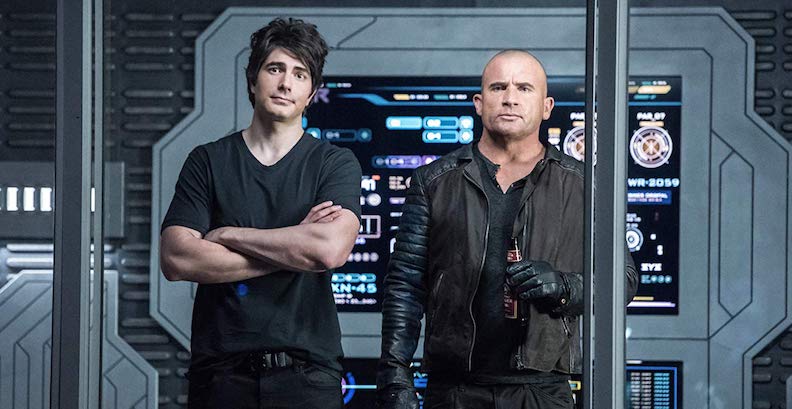 The Legends head to England in the 70s and Ray goes a bit Punk.

When you start an episode with the Queen of England going on stage at a punk show, crowd surfing and mooning the crowd, there’s not much you can do to top the opening teaser.

The rest of the episode doesn’t manage to go farther over the top, but having the Legends investigate a being of mystical origin within the backdrop of the punk scene in the 1970s gives a great opportunity to explore John Constantine’s history. The comic book version of the character has his roots in punk-era England. He was the lead singer in a punk band at the start of his rebellious streak.

But this Constantine is a little too young to have been a member of Mucous Membrane at the same time that the Sex Pistols were making a splash. So his origin gets a tweak for a new era and a new medium. He’s still connected to the punk scene, through his conception and birth, and Mucous Membrane is more of an homage than a part of a movement.

John Constantine, though, isn’t the focus of this episode, even though he gets to meet his mom for the first time. Instead, straight-laced Ray Palmer is the one that gets to have all the fun, infiltrating the punk band harboring the mystical entity. Ray has to steal one of Queen Elizabeth’s corgis and ends up getting a tattoo before gaining the trust of the entity and learning that the leader of the band is a shape-shifter.

While Ray tries to protect the shapeshifter from the rest of the Legends, giving her/it a second chance the way he gave Nora Darhk a second chance, she takes the form of the Legends she saw in a newspaper referencing their disco adventure, finally ending up as Amaya when Constantine strips her of the ability to change form and locks her up on the Waverider.

Thankfully, Nate, Amaya’s ex-boyfriend, is still in Washington D.C. at the Time Bureau headquarters, getting into misadventures with Gary. When the pair goes back in time to investigate a mystical distortion in prehistoric times (with maybe the worst-looking saber-toothed tiger I’ve ever seen, Gary offers Nate a gift to commemorate their becoming Time Bros. The gift? A carnivorous plant resembling Audrey II from LITTLE SHOP OF HORRORS that sprouts in the Time Bureau HQ that Gary and Nate have to slay.

It was a quick moment, but it got a great laugh out of me and injected some more humor into the episode. Sometimes, the best part of an episode of LEGENDS come in the B-plot.

The series may not be firing on all cylinders the way it did over the last two seasons, but it has been consistently fun in the first three episodes of the season. A lot of that has to do with the addition to the cast of Constantine and the staff of the Time Bureau, which changes up the show enough to ensure it won’t get stale any time soon.