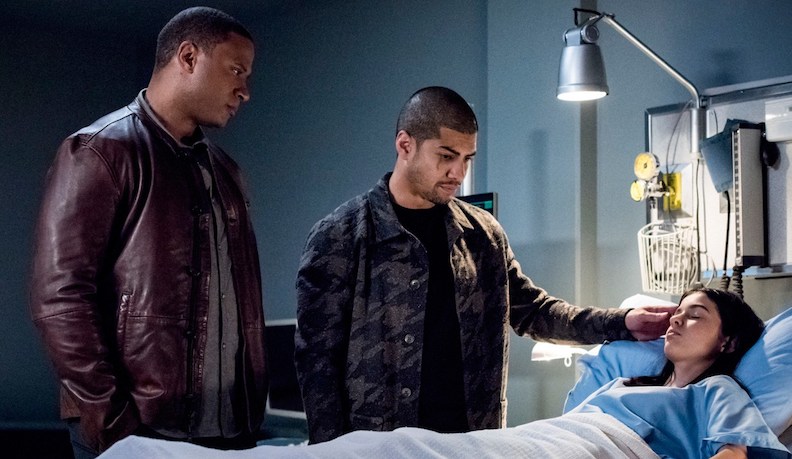 Things are not going the heroes’ way.

I know we’re just four episodes in, but so far this has been my favorite season of ARROW. I’d dare say it’s the best. The series got a new show runner this season in Beth Schwartz, and the changes she made  have been apparent right from the start. ARROW has been amazing in its’ seventh season.

Every episode has been engaging, they have been captivating and more importantly, every episode has me aching for more. That’s not something that usually happens in a show’s seventh season. I figured after the way season 6 ENDED that this would be ARROW‘s final run at things, but after the first four episodes, I don’t want this to end. I want a whole lot more of this.

The narrative split between Oliver in prison and everyone else back in Star City means each side gets to tell a little bit of each story. Nothing moves too fast.More importantly, nothing moves to slow. The pacing has been brilliant so far. And despite more limited time for everyone on screen, every character has been more fleshed out this season than in any prior.

Oliver, in prison after making a deal with the FBI to keep his team free of prosecution as vigilantes, has been working angles at Slabside for information on Ricardo Diaz. But after the assault on the prison guards last episode, it’s not going to be easy. He thought he was moving himself closer to the man calling the shots, The Demon, but here, he is dealing with psychotherapy. Dr. Jarrett Parker is trying to break Oliver here. He’s trying to force Oliver to move away from the moment that led him on his path as the Green Arrow, when his father shot himself on that raft after the Queen’s Gambit went down.

The extreme therapy keeps Oliver Queen from the prison brawls and instead allows him to emote, which Stephen Amell does well at this point.

Meanwhile, Felicity is still on the path of trying to get to Diaz through The Silencer, the member of the Longbow Hunters she captured last week. She turns to the Earth-2 Laurel, the evil doppelganger of Oliver’s late first true love, to try and get Silencer to talk. Laurel (Fauxrel? Did I use that one last season?) isn’t as evil as she used to be and makes sure that Felicity knows the risks.

Dinah Drake and Rene Ramirez, on the other hand, are advancing the mystery of the new Green Arrow that’s arrived in Star City. Dinah, along with the rest of the SCPD, are trying to arrest him, but the new vigilante has saved Rene’s daughter and the Wild Dog is determined to protect him from the police. It puts Rene and Dinah at odds, but Dinah can appreciate what the new Arrow means and the good he’s done – especially when he saves them both from an arson and catches the arsonist – so the team ends the episode unified.

But the real hook is the flashes to Oliver’s son, William, now all grown up and on a scavenger hunt with Roy Harper, set up by Felicity. Now that they’ve left Lian Yu, they’ve returned to a Star City overrun and would have been taken down by the police, who are now just hired guns. But Roy and William are saved by an older Dinah Drake and Rene’s daughter, Zoe. And the scavenger hunt Felicity sent William on has an interesting twist: Felicity Smoak is dead. But is she DEAD dead? That remains to be seen.

What also remains to be seen is what, exactly, is going on with these flashes. Are they a glimpse into the future? Or are they a look at another world in the multiverse? Or did Barry Allen MESS WITH TIME again?  Really, all options are on the table. I really want to know what’s going on.