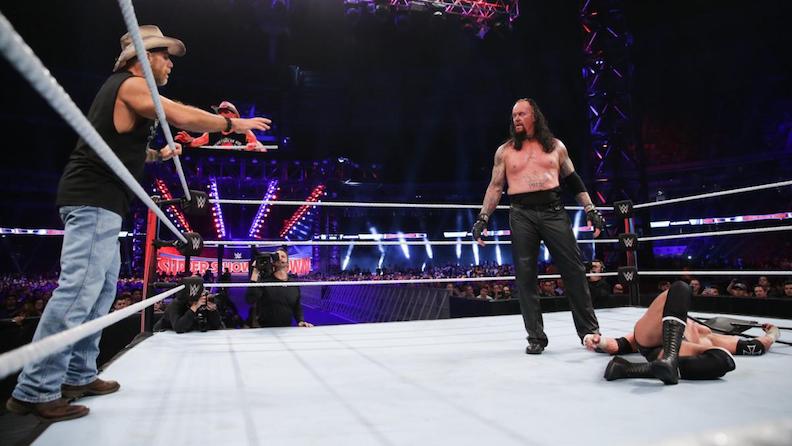 The WWE heads to Australia for a supersized Network Special! Our featured attraction? A “final encounter” between The Game and The Deadman!

Coming to you live (and really early in the morning for us here in the states) from the Melbourne Cricket Grounds in Melbourne, Australia! Hey, was that a new “THEN, NOW, FOREVER” opener? They put Hulk Hogan in this one! I guess he’s out of the company dog house.

SmackDown! Live Tag Team Title Match: The New Day (c) vs. Cesaro and Sheamus – Finally, Cesaro is back on a Network Special! Hey, Kofi and Xavier Woods are your New Day reps tonight! I was complaining about that during the HELL IN A CELL write-up! With these guys in the ring, you’re going to get a fun match, and they deliver Down Under, getting the crowd into things to start the show. The New Day, though, had the edge and double team Cesaro to get the win and retain the straps.

SmackDown! Live Women’s Championship Match: Becky Lynch (c) vs. Charlotte Flair – Charlotte is looking to regain her title after losing the title to Lynch at HELL IN A CELL, and I’ve lost count at how many championships she’s won already. Both women surely want to go in to the next WWE Network Special, the all-women EVOLUTION, with the title. Given how well Flair and Lynch know each other, there was no warm-up period for this match, they went all out from the opening bell. The ending may have been a little less-than satisfying, with Charlotte winning by disqualification, but we’ll surely get more from these two going forward, and at least the belt doesn’t get hot-shotted between the two women, like they did a couple of years ago with Flair and Sasha Banks.

Elias and Kevin Owens vs. Bobby Lashley and John Cena – The Champ Is Here! And he’s in a throwaway tag team match! With hair! Elias and Owens work over Lashley for most of the match before Big Bobby tags Cena in. The Champ hits his moves of mild discomfort on Elias, then punches him in the face for the win. Cena thanks the fans, and it sounds like he’ll be off doing other things.

Billy Kaye and Payton Royce vs. Asuka and Naomi – Another seemingly thrown together tag team match, and the IIconics are the hometown team here. I’m starting to get bored with this show. Royce and Kaye get the win for the mild hometown pop.

WWE Championship Match: AJ Styles (c) vs. Samoa Joe – Now business is picking up. This is no-countout and no-DQ, so I imagine WWE will have another way to muddy the waters with the finish of this match, though they already used the “champ taps while the challenger is being pinned” garbage finish at HELL IN A CELL. I love watching these two, and Joe beating the hell out of Styles was great, until Joe popped his knee out when Styles put him through a table, which evened up the odds for the rest of the match. The knee is the deciding factor, though, and Joe had to tap to the calf crusher. Another show-stealing moment for both guys.

Ruby Riott, Sarah Logan and Liv Morgan vs. Nikki Bella, Brie Bella and Ronda Rousey – We’re wasting a Ronda Rousey match on the Bellas and the Riott Squad? Color commentator Corey Graves mentions that this is where Rousey’s undefeated MMA streak was snapped, so wouldn’t a conquering moment in a solo match make more sense? I shouldn’t try and figure out WWE booking… The Riott Squad managed to handle the Bellas, but once Rousey got in the ring, much like the Cena match, it was academic. She gets Logan and Morgan in a double stacked armbar for a double submission. Maybe the champ should have taken all three on at the same time.

WWE Cruiserweight Championship: Cedric Alexander (c) vs. Buddy Murphy – They’re really throwing everything out to stretch this card out to four hours. The challenger is the hometown boy, and he gets a better reaction than Kaye and Royce did. I saw these guys go at it at MSG back in July and it was a fun match. Alexander is an amazing talent, and it’s easy to see why they have kept him undefeated for all of 2018 – until tonight. The hometown boy makes the Aussies 2-0 tonight as Murphy wins the Cruiserweight strap.

Braun Strowman, Dolph Ziggler and Drew McIntyre vs. Roman Reigns, Dean Ambrose and Seth Rollins – We’ve got four champs in this match. Reigns is the Universal Champ, Rollins the Intercontinental Champ. Ziggler and McIntyre are the Raw tag team champs. Strowman’s boys are trying to sow seeds of doubt in Ambrose to bring some drama into the match. The biggest drama, to me, was when Braun went to the top and tried a splash on Rollins. I wasn’t sure the ring would hold. But then Reigns accidentally hit Ambrose with a Superman Punch. At least they’re playing into a story here. We don’t always get that. They played the doubt when Ambrose got up well, especially with the Lunatic Fringe looking like he had no idea what was happening. Ambrose ended up getting the pin on Ziggler to give The Shield the win. Match felt like it went too long with too much dead time, which will likely be exceeded in the main event.

After watching this match, though, forget Reigns-Strowman. I’m much more interested in seeing WWE elevate McIntyre and get him in a program with the champ.

The Miz vs. Daniel Bryan – Here we go again. They’re adding some stakes this time, though, with the winner getting a WWE Championship match at a later date. Miz has dominated this feud lately, trolling pretty much everyone who was ever part of Bryan’s YES! MOVEMENT.  But in contrast to the battles they’ve had the last few months, Bryan wins this one in less than 2 and a half minutes with the deadly small package, as AJ Styles watches from the back clutching his title.

Triple H vs. The Undertaker – Oh for the love of all things holy, not this again. It’s the rematch no one cared about main eventing a show no one will remember in a couple of weeks. To give the match a little bit more juice, the COO of WWE has a bald Shawn Michaels in his corner, while the Deadman is seconded by his brother Kane. The entrances alone are enough to have me lose interest in everything. Jojo announces that this match is “for the last time ever” and I swear I heard a segment of the 70,000 people in attendance laughing.

Everything that everyone hated about the last Triple H-Undertaker match was on display here. Chairs and tables and sledge hammers and dead referees and middle-aged men laying around selling beatings. And everything was done a half a step (or more) slower than the last time they fought. But hey, Kane was here this time. He was ineffectual, of course, as he should be more concerned about his term as mayor in Knox County, Tennessee. Triple H and HBK double-team ‘Taker and The Game gets a win against the Dead Man Down Under. Good for him.

And everyone shakes hands and hugs and all the blood feuding is once again gone and kayfabe rolls over in its grave just one more time. Psych. Kane and Undertaker turn on the former D-X and lay waste to them to add a few extra minutes to the show.

Outside of a couple of matches, I feel like I wasted my time watching a glorified overseas house show.

WWE will be back with their next Network Special, the all-women EVOLUTION, on October 28 and then with the all-men Saudi Arabia show, CROWN JEWEL on November 2. Woo.