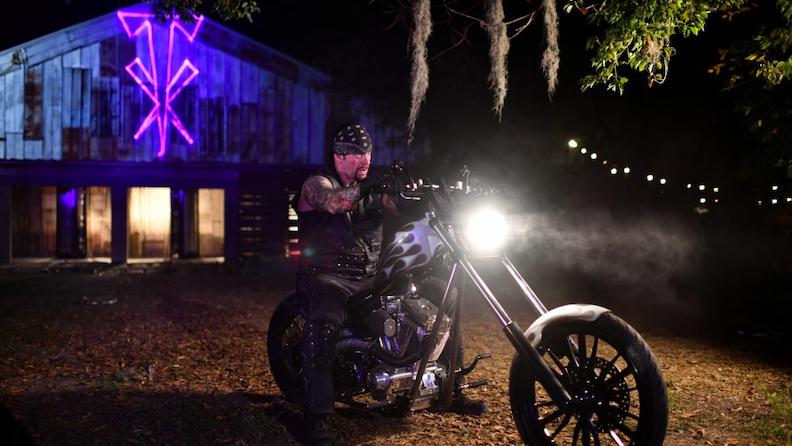 With a global pandemic cancelling sporting events all over the world, never let it be said that WWE is willing to go down without a fight. Instead of completely cancelling – or even postponing – its premiere event because gathering 80,000 people into a football stadium may get them all killed, the company turned the Sunday night spectacular into a two-night event taped in front of an empty arena.

Stephanie McMahon starts us off to remind us that “there won’t be 80,000 screaming fans due to the current circumstances.” Never one mention of the word “coronavirus” or COVID-19. It’s a weird choice, and it leads into a weirder choice: a mash-up of all the performances of “America, The Beautiful” over the years. The WWE production team, of course, makes it work.

I’m going into this pretty blind, having no idea which matches are going which night, so this will be a weekend of surprises for me.

And then the opening video goes a little wonky, too, having a lot of fun with the fact that WrestleMania had to undergo a lot of changes in the lead-up to the event. Hearing the start of a WrestleMania without a roaring crowd is definitely strange. And then Michael Cole throws it to host Rob Gronkowski before we get to the first match. I hope we don’t have to see him all that much this weekend.

Women’s Tag Team Championship Match: Alexa Bliss and Nikki Cross vs. Kairi Sane and Asuka (c) – I always enjoy Cross and Bliss as a team. Nikki Cross did what I wasn’t sure was possible – she made Alexa Bliss come off as more likable. Without crowd noise, all the talking in the ring is VERY audible, and the ring chatter is very distracting from the announcing. Not having watched any of the empty arena Raws or SmackDowns, this is going to take some getting used to. Bliss and Cross keep hugging, and that just seems unsafe “due to the current circumstances,” as Stephanie would say. The Kabuki Warriors are an impressive team, even though I’ve never really cared for Asuka. Some of the timing in the match was a little off, and things that can typically be covered with a cut-away for a crowd shot are caught on camera. For example, when Asuka had the Asuka Lock on Cross, Asuka oddly covered Cross while Bliss came off the top rope. Just an odd moment. Bliss and Cross fight back from working underneath all match and Bliss pinned Sane after another Twisted Bliss to regain the women’s tag team titles.

I doubt I would have put that on the show as an opener in a normal situation, but it was fine for what it is.

King Corbin vs. Elias – As ridiculous as Corbin looks with the crown and fur cape, it’s still better than the Applebee’s bartender motif he used to have. Elias showing up is apparently a surprise, since Corbin tossed him 15 feet from a perch to the concrete floor on Friday Night SmackDown. Lots of selling, as Michael Cole tells the crowd that it’s tough to rally yourself without an audience cheering you on. It’s also tough to watch a Corbin match under any circumstances. Elias, surprisingly, is starting to grow on me. My new-found fandom for Elias pays off, as Corbin tries for a win with his legs on the ropes for momentum, but the referee catches it. So Elias rolls the King up and hooks the tights for the win.

Raw Women’s Championship Match: Becky Lynch (c) vs. Shayna Baszler – Last year at WRESTLEMANIA, Lynch was victorious in the main event, the first time women have ever gone on last at the year’s biggest event. Now, she’s the third match on the first night of a two-night event, and I would be shocked if she’s not being sacrificed here. The elevation of Baszler started in earnest at Survivor Series and ran right up through Elimination Chamber, when the challenger took out all five of her opponents. Despite starting her year-long reign on an unbelievable high, Lynch has cooled off considerably since. This is easily the hardest hitting match of Night One so far, as Lynch gives as good as she gets from the challenger. But as violent as Baszler is, The Man decided to use her smarts to get the win, ripping off the Bret Hart-Roddy Piper Intercontinental Championship match ending from WRESTLEMANIA 8, reversing a sleeper hold into a pin to retain her Raw Women’s Championship. Pretty shocking way to go here, as I thought for sure Baszler was winning. Great match.

Intercontinental Championship Match: Daniel Bryan vs. Sami Zayn (c) – Michael Cole calls Zayn one of the “most annoying men” in WWE, but I still love his entrance music. It’s a bit out of place with his new character, but I’m glad it’s still around. Zayn channels his inner Larry Zbyszko and stalls like crazy to start. Zayn’s cohorts, Shinsuke Nakamura and Cesaro, help him stall against the challenger. Drew Gulak shows up to even the odds. If Teddy Long was around, he would make this a tag team match, playa. Once Zayn and Bryan lock up, the challenger starts beating the daylights out of Zayn, leading to the modern classic line from color commentator JBL: “There really shouldn’t be crying at WrestleMania.” Bryan’s dominance doesn’t translate to a win, though. After a distraction from Nakamura and Cesaro, Bryan came off the top rope and got caught with a Helluva Kick, which was enough for Zayn to retain. Once the stalling finally ended, they had a fun match, but it wasn’t really anything special.

SmackDown Tag Team Championship Triple Threat Ladder Match: Kofi Kingston vs. Jimmy Uso vs. John Morrison (c) – I guess “due to the current circumstances,” only one man per team is in this match for the tag team championships, even though there were 5 guys running around the previous match. Michael Cole and JBL don’t seem to feel the need to explain the reasons. This is just a spot fest and so far is the match that suffers the most from not having an audience to feed off of. I can’t imagine how crazy this match would have been with all six men in the ring. The ending of the match is, at least, unique. All three men climb the ladder and grab the belts. Uso and Kingston headbutt Morrison, who falls off the ladder with the belts in hand, allowing him to retain the titles for himself and Miz. Definitely not as good as it could have been with a crowd present.

As we prepare for the sixth match of Night One, Tom Phillips and Byron Saxton replace Cole and JBL at the announce booth.

Seth Rollins vs. Kevin Owens –  Rollins’ whole “Monday Night Messiah” thing seems like the perfect gimmick for him. Everyone already wants to hate the guy, so you may as well lean into it with the douchiest attitude possible. Both Rollins and Owens spent a lot of time in tonight’s venue – the WWE Performance Center in Florida – as NXT champions. We’re in full WWE Main Event Style mode for this match, with big moves followed by overselling, so the pacing of the match is way too slow to start. And Rollins’ jaw-jacking makes him even more unlikable. So many reversals and counters. Match never really gets going and Rollins purposely gets himself disqualified by hitting Owens in the head with the ring bell.

Owens calls Rollins a little bitch and challenges him to no disqualifications and no rules, so Rollins comes back to the ring and continues to beat on Owens. Ring steps to Owens’ head. A steel chair to the back. And then to the front of Owens. “You’ve always gotta be a bitch,” Owens says, writhing on the floor. And then Owens gets some retribution, smacking Rollins in the head with the ring bell twice before climbing to the top of the WrestleMania sign and leaping off to hit Rollins with an elbow drop through the announce table. And everyone laid on the ground wheezing. Rollins is actually selling the ribs after the elbow, which makes me think he’s actually hurt. And then Owens puts him away with a Stunner. As a whole, it was slow and disappointing, but the elbow from the top of the sign was impressive.

Host Gronk and Mojo Rowley are back to hype and R-Truth shows up, asking them to not try and win his 24/7 Title. So Mojo of course ends up with the title after Gronk knocks Truth out.

We preview night two, with the big matches including the WWE Championship Match, Edge’s return to the ring, Bayley defending the SmackDown Women’s Championship in a 5-way elimination match, Charlotte Flair challenging for the NXT Championship and John Cena taking on Bray Wyatt in a “Funhouse Match.” I guess I’ll check it out.

Universal Championship Match: Braun Strowman vs. Goldberg (c) – This was supposed to be Roman Reigns challenging for the title. But “due to the current circumstances,” Reigns pulled out of the match. Goldberg’s entrance really is lessened by the lack of a crowd. WWE really should’ve ran with Strowman two or three years ago when he was riding a hot streak, and he’s really cooled off considerably since then. This is just a video game match where the finishers are jacked up. Goldberg hits four spears to no avail. Strowman hits four powerslams and that does the job. Strowman is finally at the top of the Friday Night SmackDown! mountain. At least it was short, and hopefully this is the last we see of Goldberg in a WWE ring.

WWE announces next year’s WrestleMania: Hollywood, and all I can wonder is whether WWE has a performance center in Los Angeles. Hopefully we’re not all still under “the current circumstances” by the end of March 2021.

At the top of the show, Stephanie McMahon promised matches in “interesting locations,” so it’s time to go to a cemetery for our main event.

Boneyard Match: AJ Styles vs. The Undertaker – Styles comes to the cemetery in a casket in the back of a hearse. ‘Taker, on the other hand, rides a Harley in and he’s in American Bad Ass mode, as the camera work goes full feature film. Did Matt Hardy book this before he left for AEW? Undertaker plays the grizzled veteran who takes gruff shots at the wise-cracking upstart. Everything about this match is weirdly compelling. Putting Styles – who is great in the ring – out of his element and into a brawl is an odd choice. But it works here, especially as Styles’ compatriots Luke Gallows and Karl Anderson show up with a horde of druids. Undertaker takes them all out and then gets beat down by the O.C. Finally, Taker gets rid of Anderson and Gallows, but Styles hits him with a tombstone. No, not the piledriver, an actual tombstone. The only thing this is missing is an appearance from Kane. Styles finally hits Taker with a shovel and sends him into the grave that was dug out for him. As Styles gets in a tractor to finally bury the Undertaker, Taker shows up behind him in true horror movie style. “You don’t last 30 years around here without being able to take an ass-kicking,” Taker tells him. The Phenom takes out Gallows and Anderson on a tin roof as Styles wonders how Taker is still standing. Undertaker finally chokeslams Styles off the roof and taunts his fallen foe. “Don’t bury me,” Styles repeatedly pleads. Undertaker kicks Styles into the grave and then drops the dirt on top before riding off on his Harley.

What a mixed bag, but overall Night One of WrestleMania 36 was a lot of fun. Stay tuned, because we’ll be back tomorrow for Night Two!