Celebrated writer Scott Snyder takes his first shot at DC Comics’ premiere team of superheroes, but the most fun comes from the villains!

In past reviews here, I’ve been pretty up front about not getting all the hype about Scott Snyder’s time at DC Comics. I bailed on his Batman run and I didn’t make it through Dark Nights: Metal (though I have the hardcover collection coming later this week). But I enjoyed the craziness of NO JUSTICE (written with Joshua Williamson and James Tynion IV). And honestly, I couldn’t let a new first issue of JUSTICE LEAGUE pass by without picking it up.

I was pleasantly surprised. The first issue of JUSTICE LEAGUE set up grand plans to continue what he started in METAL and NO JUSTICE. The League dealing with an incoming space projectile identified as The Totality, with the newly-returned Martian Manhunter keeping the team together the way he used to. 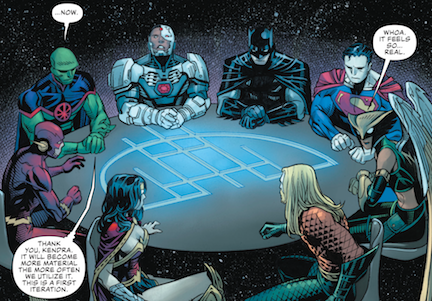 It’s good to see J’onn back on the League. He’s been gone way too long. The League in this issue, though, wasn’t just the eight members at the astral table above. The main members of the team led other heroes – while doing Batman impersonations, a great moment in the book – in taking down Neanderthals who were led by Vandal Savage to take over the world. It’s not a particularly difficult plot for the League to foil, and once they DESTROY THE MOON with bombs Batman planted there in secret years ago, everything falls apart.

And that’s where recent League member-returned-evil Lex Luthor comes in, taking Savage out and introducing his own counter to the new League.

I love that Snyder is going full CHALLENGE OF THE SUPERFRIENDS with this book and introducing the Legion of Doom to challenge the Justice League.

This was a great first issue, and Snyder has me fully on board. Combined with Jim Cheung’s art, this was also a beautiful issue to read. I’m looking forward to seeing where Snyder goes with the coming Totality and how it ties in to what’s going on with the Legion of Doom.