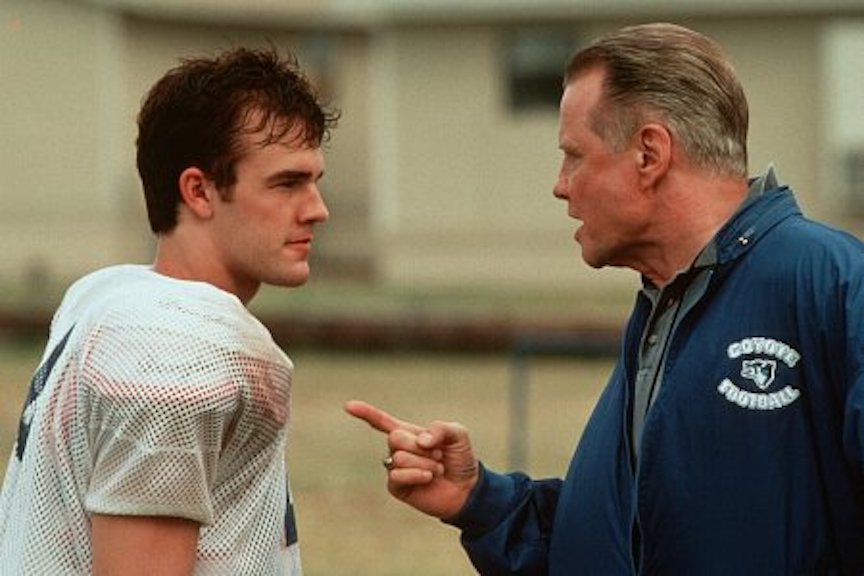 Back in the late-1990s, teen dramadies were all the rage, and even MTV was getting in on the action. Released 19 years ago today, the MTV Films vehicle VARSITY BLUES forever changed the way high school football was presented.

As we approached the end of the 20th Century, James Van Der Beek was a pretty hot property. He was the star of the WB Network hit, Dawson’s Creek, which hadn’t yet moved its focus away from Dawson for the much more likable Pacey and Joey, and MTV Films capitalized on his popularity by casting him in the lead of this movie about high school football in a small Texas town, where Friday nights were dedicated to the gridiron in the same way that Sunday mornings were dedicated to church.

Van Der Beek led a fairly impressive cast – including Jon Voight as the revered but not liked football coach, Paul Walker, Amy Smart, Ali Larter and Scott Caan – in the film about back-up quarterback Jon Moxon who doesn’t particularly like football given the chance to shine when the star gets injured. The movie is probably best remembered for two things: Van Der Beek’s TERRIBLE Texas accent and the whip cream bikini that Ali Larter’s character dons to try and seduce Moxon.

Also, the movie’s soundtrack is incredible, but that should be expected from a movie produced by MTV…

Varsity Blues will more than likely be included in a future edition of the new MOVIES AT RANDOM feature, where we’ll go much more in depth to the film. Remember! You still have time to vote for the second edition of the feature. Check it out:

Vote for the next movie in @stevenferrari's collection to be included in his new feature, #MoviesAtRandom!

What’s your favorite part of VARSITY BLUES? Show your love in the comments!