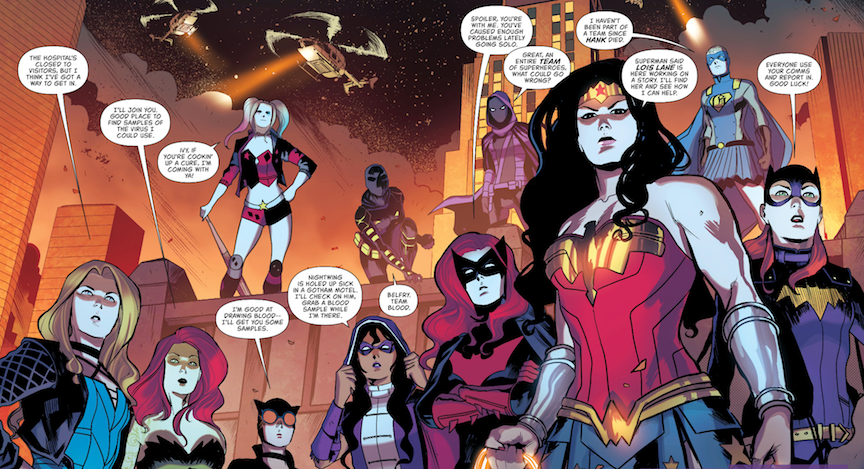 Strong women are the focus of today’s reviews, as Batgirl and the Birds of Prey have a membership drive when the men of Gotham are incapacitated. Over in Superman, the Kent family has been transported to Apokalips and Lois Lane needs to kick some ass.

With all the men in Gotham City incapacitated by a mysterious virus, the Birds of Prey need a little bit of help to figure out what’s going on. Thankfully, Gotham has a pretty large contingent of strong women who were willing to join forces to figure out what’s happening. Heroes like Batwoman, Spoiler, Orphan and Gotham Girl come together with villains (or anti-heroes, at this point) Catwoman, Poison Ivy and Harley Quinn to find the source of the illness. Even Wonder Woman pops in to Gotham to lend a powerful hand. 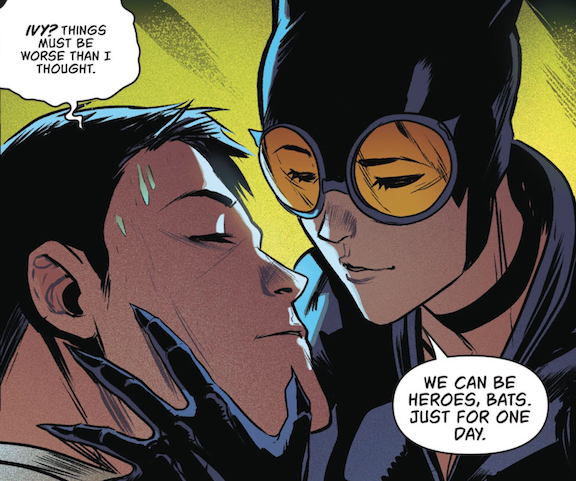 With a little help from Black Canary’s visiting boyfriend Oliver Queen, and the go-ahead from Task Force X’s leader Amanda Waller, the group splits up into smaller teams to gather the blood of the infected men so Poison Ivy could try to work an antidote. Meanwhile, Wonder Woman is rescuing sick men who hadn’t made it to the hospital yet, while Lois Lane investigates in her own way.

A trip to the hospital with Oliver reveals the perpetrators to be a fringe group called the Daughters of Gotham, who want to save Gotham City by eliminating what they see to be the problem – the city’s men. They may have a point, since most of the insane vigilantes and criminals in the city are guys. But a massive genocide doesn’t really sit well with Batgirl and her team.

The Daughters get the better of the Birds and capture Batgirl, Batwoman and Harley Quinn, and they introduced the heroes to the leader of the Daughters, Patient Zero, who reaffirms that when the men are dead, Gotham City won’t need to be saved ever again.

At least we find out the cause of the sickness affecting the men in the second issue of the story. I still don’t think the cause of it was ever revealed in Y THE LAST MAN. Closure is good sometimes. (Yes, I know not knowing what happened was the point… still, it was built up for YEARS!)

The Benson sisters have an incredible talent for these Birds of Prey stories, and the MANSLAUGHTER arc continues to be engaging. With the collection of heroes in the book right now, I’m really looking forward to how the whole thing plays out. 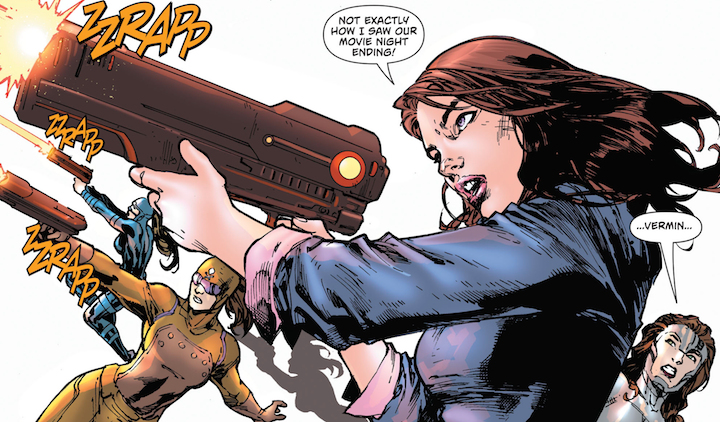 As the forces of Apokolips continue to search for its new leader – while Darkseid is still an itty-bitty baby – the Kent family has to survive literal hell after Luthor went ahead and accidentally kidnapped Lois and Jon Kent last issue while trying to get Superman to help him. 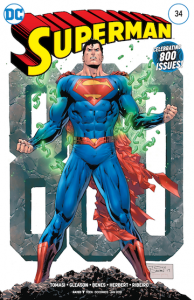 The family was split up in the Boom Tube transfer and, while we see Luthor’s machinations trying to get out of being the next Lord of Apokolips, the issue focuses mainly on Lois Lane. She’s discovered by Granny Goodness’ Female Furies, who try to capture Lois, but get attacked by a pretty nasty creature. When Lois takes up arms to help the Furies survive, she’s accepted into the group and made an unofficial member herself.

It’s a great spotlight issue for Lois, showing off her strength and tenacity. While the next issue looks to follow the new Superboy before rounding back to bring everything together for a conclusion, I honestly wouldn’t mind a “LOIS LANE AND THE FEMALE FURIES” arc somewhere down the road.

The placement of this issue, though, feels a little weird. One of the variant covers for the book, included in the digital purchase of Superman 34, notes that this is the 800th issue of the SUPERMAN comic – composited through a few different volumes over the years. It’s a great issue highlighting one of Superman’s greatest character creations, but it doesn’t feel like an epic story that comes with an issue with a couple of zeroes. Seems like a missed opportunity. After all, if DC Comics keeps the twice-monthly shipping for the book, it won’t hit 900 for more than 4 years.

It’s a great image from artist Tony S. Daniel, though, and his variant I’m sure will be a collector’s item, especially as future generations scratch their heads trying to figure out what was so special about this…