This week I watched the horrific results of a society ravaged by plague, duped by sycophants desperate for power, and the crumbling of society as we know it. I also watched episode 4 of The Stand, “The House of the Dead”.

I had a sinking feeling early on. I thought the show was building momentum after a rough DEBUT episode. At no point have I been wowed by what creator Josh Boone put together, but by the end of episode 3, I thought progress had been made. Soon, I realized character mix is going to play a huge role in how much I enjoy any one episode. Owen Teague’s Harold Lauder played a limited role in EPISODES 2 and 3. He was featured here and I feel bad for Teague, because I’ll never be able to see him as anything but creepy, school-shooter-in-training Harold.

Even at points when I think Boone wants us to feel for Harold, Teague’s creepy killer vibe derails any chance, which derails a huge part of what made the book work best. Sympathizing with these characters in their living hellscape is what made King’s The Stand such a page turner and generally considered one of his greatest works.

So, with a Harold-centric episode, we continue to bounce back and forth in the timeline. Someday, Topher Grace should make a cut of this miniseries a la his underground Star Wars prequel trilogy work. There remains some good acting and casting, but time and time again, Boone’s flashback and flash-forward over-reliance has stolen any chance of audiences finding any characters they can root for.

Harold’s plot revolves around uniting with school teacher Nadine Cross. Nadine, sent by Randall Flagg as a device to ensure Harold stays on his path of evil and lead him to a position of power in Flagg’s Las Vegas. All this is undermined by the audience having already seen that Harold is a morally-bankrupt character that has already decided Team Flagg is where it’s at.

Quizzically, Boone still decides to stay on book here with Nadine, confronting Harold and trying to present it like Harold would do anything but decide to unite with the temptress when he’s already shown his allegiance to Flagg and his hatred for Stu and Frannie.

At one point in the episode, it seems even the writers have trouble keeping track of the constant narrative jumps. In yet another flashback, Harold professes his love to Frannie and is shot down rather cruelly. Fine, staying on book, right? Then Harold immediately states “It’s because of Stu Redman, isn’t it?” Which, because of the constant time jumps, the audience knows this to be the case. Yet at this point linearly, Frannie and Harold had only met Stu in passing and with no indication they would ever see Stu again. 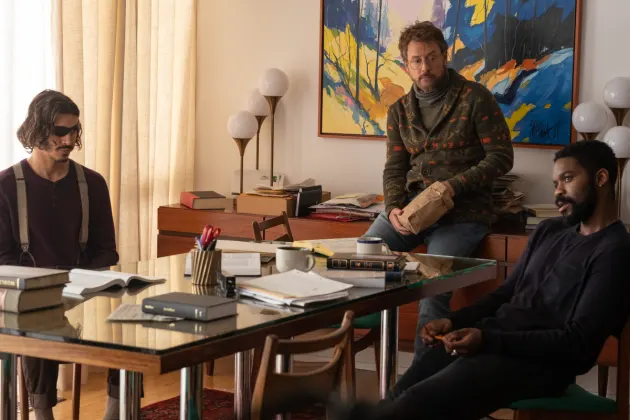 Harold and Nadine weren’t the only plotters in this episode. The Boulder Free Zone Committee – Larry, Nick, Fran, Glen, and Stu – spent most of the episode plotting how to move forward in Boulder. Again, this comes off differently in the book, with the reader feeling the general concern they have in keeping their society together. In the show? With Glen getting very little screen time, Nick staying mostly in the shadows, very little actual time with show-present day Larry, Stu, and Frannie? They come off as more sinister, worried about their place in the new world.

They also must decide how to deal with Flagg’s threat from last episode. They decide to send spies to Vegas to see what exactly we’re dealing with. Considering we’ve barely seen anything to do with Las Vegas three episodes in and there is zero Vegas or Flagg presence in this episode, I guess that’s a good thing, as Boone seems wholly uninterested in the Las Vegas side of the equation.

Here is yet another show blunder in my opinion. By the time the Boulder Free Zone Committee decided to send spies in the book? You had spent time with each of the characters, you felt for them for going on what you couldn’t help but think was a suicide mission. In this version of King’s work, time is a flat circle and virtually meaningless. The chosen spies – Tom Cullen, Dayne Jurgens, and Judge Ferris – are virtual non-entities at this point in our story. Tom had 30 seconds in the last episode. We’re briefly introduced to Dayna earlier in this episode, and we meet Judge Ferris literally when they’re sending her to her death. For as much character building Boone’s bothered with, they might as well have put them in red shirts and given them no speaking parts.

In the case of Tom, that might have been for the best, as they seem to have no idea how on earth to handle a developmentally disabled character. Which, yeah, it’s not easy, and King’s usage of Tom was probably just as problematic. But at least King put in the legwork to make you care for Tom. He tried to come up with a rationale for how Tom could remember an intricate plan to be a spy. While hypnosis is a cheesy plot device, at least King tried.

Here, Tom’s shown with a near-photographic memory, recounting word for word the plan the Committee has for him, including how to travel, what information to look for, and when to return. Keep in mind, Tom’s been on screen maybe 5 minutes at this point and shown to have extremely limited memory as he consistently fumbles over a mantra to explain his condition to strangers.

We end the episode with the Boulder spies going west, power coming back on in Boulder and Harold and Nadine cementing their villain status by killing a friend of Harold’s who had stumbled upon them stealing explosives.

At no point did we see Las Vegas or Flagg. We’re four episodes into a nine-episode series and the evil side of the battle of good vs. evil has been an afterthought. Honestly, the good side hasn’t really been around, either, as Mother Abigail had another 2-3 minutes of screen time, with Nick and Tom finding her in a nursing home surrounded by the dead. There’s a brief Stephen King cameo at this point, where King can be seen in a poster for Abigail’s Hemingford Home nursing home. Also in this side story with Tom and Nick, we meet Julie Lawry, played by ARROW’s Kat McNamara. While her accent could use some work, she could be a fun character, outrightly and unabashedly evil and a scene stealer.

I guess this would work better if Boone seemed to have something to say about the non-mystical aspects of this world. There’s something to be said of the evil inherent to man. They touch on it a bit with the roving rapers that chased Larry and Rita in episode 2. They touch on it a bit here with another evil guy, trying to gather a personal harem when he threatens Harold and Frannie on their journey west. But at no point do I feel Boone trying to develop any sort of overall meaning to the story. The mystical components have been downplayed other than the shared dreams; there’s no grand statement about society, world building, how to come back better from a plague. Just the constant, manic jumping between space and time, to the point you’d think this wasn’t shot digitally, that spools of film were dropped at some point, and a random intern was tasked with putting the pieces back together.

After 2 EPISODES where I felt they were getting a good footing, I’m pretty down on the show at this point. 5 episodes to go.