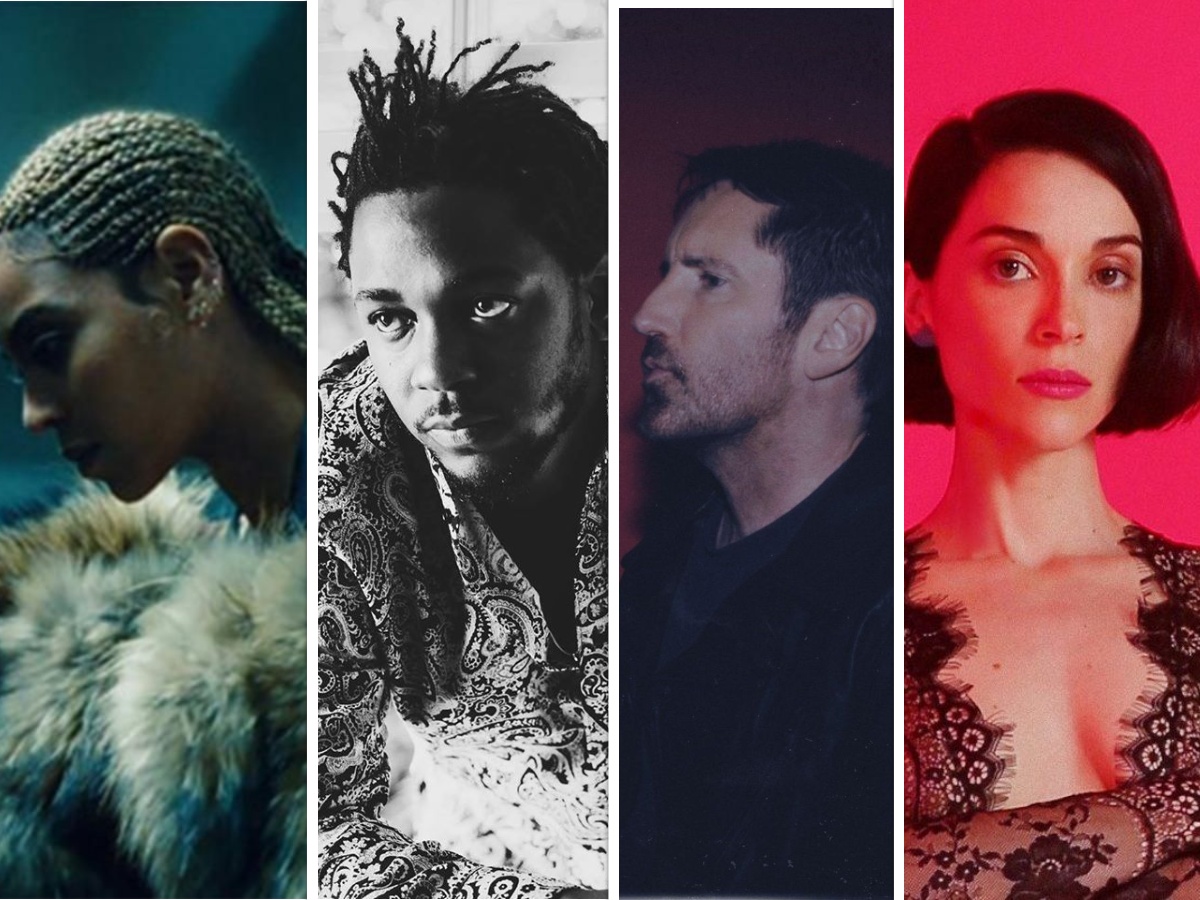 The best and most impactful artists of the last decade mastered the arts of transformation and gravity.

None of the musicians on this list ended the 2010s where they started, but they all continued to dive deeply into topics of political, social and personal importance. Whether mainstream or underground, they had something to say, and brought a sonic boldness to the table to help make sure we listened. For me, these are the 10 defining artists of the 2010s.

The 2010s will go down as the decade where Beyoncé transcended the world of pop and went from a superstar to an icon. Starting with 4, she embraced an ever-expanding palette of sounds and topics, honing in towards the more personal and political. She perfected the surprise album release with her fantastic, self-titled album in 2014. She had not one, but two all-time great performances at the Super Bowl. Then, just when it seemed like she couldn’t get any bigger, she dropped a masterpiece in Lemonade, an album that pulled from hip-hop, pop, rock, soul, funk, country and more to spin out 12 songs of raw pain, rage, grief, feminist empowerment and Black celebration. With these albums and more, Beyoncé established her brand as excellence and herself as a legend that will be known for generations to come.

If all Grimes did this decade was release Visions, it would be enough to wind up on this list. The songwriting and sounds that she cultivated best mixed her experimental nature with the pop tendencies she loves as well. There may not be a better single released this decade than “Oblivion,” its woozy synth rhythm both propulsive and off-kilter. “Genesis” is just as strong, sounding otherworldly when crafting such uniqueness is harder than ever. If Visions was a filled with subtle layers that tickled your brain, then Art Angels is pure maximalism. It’s Grimes going pop, but in her own way. “Flesh Without Blood” and “Kill v Maim” are guaranteed to get you on the dance floor. “Venus Fly” brings Janelle Monae and violin flourishes to a speaker-shaking beat. Grimes may have been in the news lately due to her personal life, but the excitement is still palpable for her new album in early 2020.

With many hit-makers of 2012 in party mode, Kendrick Lamar released Good Kid, M.A.D.D. City, an album filled with introspective, personal tunes that connected with an audience looking for something more. From there, he launched to the stratosphere. On Big Sean’s “Control,” Lamar called out most of the rap world, stating his intention to replace them. Boisterous? Yes. Prophetic? Definitely. Soon after that verse, Lamar released his magnum opus and defining album of the decade, To Pimp A Butterfly. Over a backdrop of jazz, funk and avant-garde, he masterfully covered a variety of topics from institutionalized racism (“The Blacker the Berry”) to depression (“u”) to perseverance against injustice (“Alright”). For an encore, Lamar took over the radio charts, with DAMN., led by the stunning “Humble,” as well as the Black Panther soundtrack. With such a list of accomplishments over less than 10 years, it’s no wonder that Lamar won the Pulitzer Prize for Music.

Lamar wasn’t the only one pushing against the overblown indulgences of the early 2010s. With “Royals,” Lorde pushed back against the idea of jet-setting lifestyles that most people will never get close to in their lifetimes. For her, it’s about the personal relationships forged and the experiences you have with those friends close to the ground. As the rest of the pop world was just catching up to Lorde’s minimalist sound, she moved on to wonderfully expansive electropop of Melodrama. Led by the piano-bounce of “Green Light,” Lorde tackled the end of first love with moments of ecstatic revelry, self-reflection on self-destructive tendencies and heart-wrenching ballads. In just two albums, she’s proven her creativity and willingness to go wherever her music takes her. Opening the door for other pop acts to find success in rejecting the zeitgeist, like Billie Eilish, Lorde has become a trendsetter that refuses to be tied down or limited.

Janelle Monáe brings soul, swagger, theatricality, heart and rhythm to every song she writes. You can hear all those elements firmly in place on pounding drums and slippery bass of “Tightrope,” a kick-off announcement that this decade was Monáe’s for the taking. But she’s far from a pastiche or retread of well-worn ground. “Q.U.E.E.N.” is all squiggly synth lines and fingersnaps that almost sound out of tune, but you’ll still dance to it. And with last year’s Dirty Computer, Monáe brought forth a magnificent movement that went from the Beach Boys harmonics of the title track to the Prince funk of “Make Me Feel” to the heavy-hitting feminist rap of “Django Jane.” Add in several guest vocal appearances on both pop and indie songs, an electric concert presence and a rising film career, and you have a powerhouse artist whose ascension shows no signs of slowing.

Mitski has spent this decade on a gradual rise. After a couple of self-released albums, Mitski issued her first great statement, Bury Me at Makeout Creek. Moving away from her piano-based style, she embraced a hard-edged, guitar-driven sound, as heard on the furious “Townie.” With Puberty 2, Mitski crafted an emotionally-rich album about love, alienation, racial identity and the stresses of everyday life, it contains her greatest work yet in “Your Best American Girl.” With its slow-build and explosive guitar solo, it finds Mitski at both her most vulnerable and raging. But elements like the electronic pulse of “Happy” pointed the way towards Be The Cowboy. With that record, she threw everything in, from elated horns to country vibes to disco tunes. At the center of it all though remains Mitski and her voice, one that cuts deep and stays with you long after the last note.

The 2010s were a decade of evolution for The National, while keeping their exemplary songwriting intact. High Violet felt like a continuation of Boxer, with Matt Berninger’s melancholy baritone giving heft to the anthemic “Terrible Love” and “Bloodbuzz Ohio.” On Trouble Will Find Me, the band went as close to arena rock as they’ll likely ever get, with great upbeat tunes like “Sea of Love.” But their best work of this decade came with Sleep Well Beast, a record that added glitchy electronics and newfound aggression, as heard in “The System Only Dreams In Total Darkness” and “I’ll Still Destroy You.” To close out the decade, the super-ambitious I Am Easy To Find. Accompanied by a short film and sustained by the addition of guest female vocalists and classical elements, it’s a bright alternative to its predecessor’s twilight hours. From here, The National can go anywhere, with their focused, powerful songwriting acting as an anchor.

Trent Reznor kicked off this decade winning the Oscar for Best Original Score for The Social Network. Not a bad start! From that successful effort came multitudes more, moving across genres and styles. “The Girl With The Dragon Tattoo,” “Gone Girl,” “Mid90s,” “The Vietnam War,” “Waves” and “Watchmen” represent a handful of the wonderous scores he’s crafted alongside Atticus Ross. But he hasn’t left Nine Inch Nails behind either. Some of the band’s best work was found in a trilogy of EPs and LPs that brought back the aggressive industrial rock of Reznor’s heyday, but also fitted it alongside sonic experiments. “Dear World,” is all off-kilter percussion and hushed tones. “Burning Bright (Field on Fire)” is a wall of noise. “Less Than” is an earworm synth anthem. “God Break Down The Door” is a saxophone-led mixture of jazz and trip-hop. Like David Bowie, Reznor spent this decade doing the unexpected. May that continue for many years to come.

Speaking of Bowie, no artist this decade embraced his sense of transformation from one album to the next like St. Vincent. Starting with the stellar Strange Mercy, every project that Annie Clark has done under her moniker has revealed new elements and new sides of her personality. On that record, her guitar riffs spiraled wonderfully on tracks like “Cruel” and “Surgeon.” After a horn-infused project with David Byrne, Clark transformed herself into an apocalyptic cult leader for St. Vincent. That album fused woozy synths and clattering rhythms to Clark’s guitar tones. Then came the corrupted pop implosion of Masseduction, where glam, New Wave, tearful piano ballads and guitar fuzz sat side-by-side. With each of these albums came an amazing and fresh tour where St. Vincent revamped her band, the stage and her own banter. Oh, she also built her own guitar, which has now become a favorite among indie rockers. And it still feels like Clark is just getting started.

2010’s release of Epic got the word out about the immensely-talented, heart-rendering Sharon Van Etten. From there, she kept getting better. Tramp brought out strong electric guitar work, adding some musical grit to her storytelling. Are We There further expanded her arrangements, adding in odd melodies or synth lines to songs of healing. After Van Etten went back to school, acted in The OA, scored a film and started a family, she returned this year with the excellent, unexpected Remind Me Tomorrow. Covering her new life and her road to this point, the album is Van Etten’s most daring and successful yet. “Seventeen” is a full-on rock anthem in the vain of Bruce Springsteen. “Memorial Day” and “Hands” further warp your idea of what a Van Etten album can be. Van Etten has said she may not always be in the spotlight. All the more reason to be thankful for her stellar music from this decade.