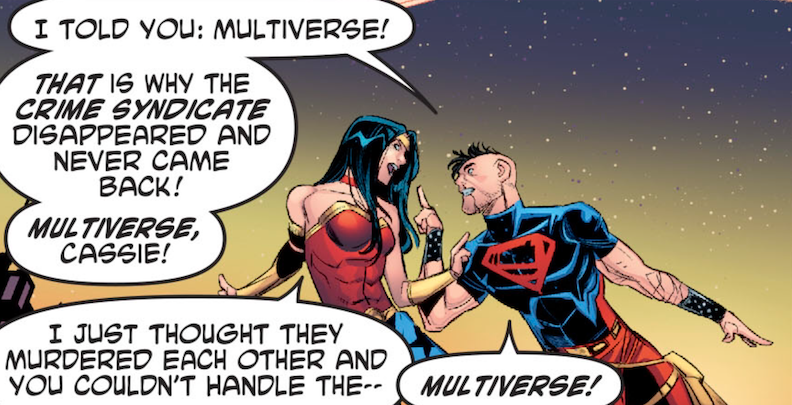 The team is back together, but they don’t get much time to catch up, let along breath, as they’re shipped off to maybe the worst place in the multiverse.

After getting shipped off into the vast multiverse by the leaders of Gemworld instead of being sent home, the Young Justice team find themselves on the least hospitable Earth they could land on – Earth 3, the home of the Crime Syndicate of Amerika!

But the CSA has left Earth 3, putting the heroes of Young Justice up against their counterparts on this world, led by an evil Wonder Girl known as Amaxon Thunder, who has both the Superboy and the Robin of her world under her thrall.

While it’s fun to see what Bendis and artist John Timms came up with as the evil counterparts to the Young Justice team, the bigger story of the issue is tease of Tim Drake taking on a new code name. Since Damian Wayne has come into the picture, Drake has been going by Red Robin, but the seeds have been planted for a new identity.

Because the Earth 3 version of himself goes by just “Drake,” which is also a male duck, our Impulse urges Red Robin to do the same. He’s certainly contemplative about it, though he has some other things on his mind when the Earth 3 counterpart of his girlfriend, Stephanie Brown, shows up in the middle of the multiversal madness. Red Robin goes into a soliloquy about how much he misses his Stephanie, though she doesn’t seem to see the difference between Red Robin and Drake. Which is weird, because Drake has reddish hair while Red Robin has black hair.

She clearly wasn’t trained by that world’s greatest detective.

I understand the reasoning behind making the first stop through the multiverse be on Earth 3, but it’s such an oft-explored world in comics, that I kind of wish Bendis had gone with a different corner of the multiverse, just so we could experience something new. But who doesn’t like a good fight between doppelgängers?