Where Everybody Knew Your Name 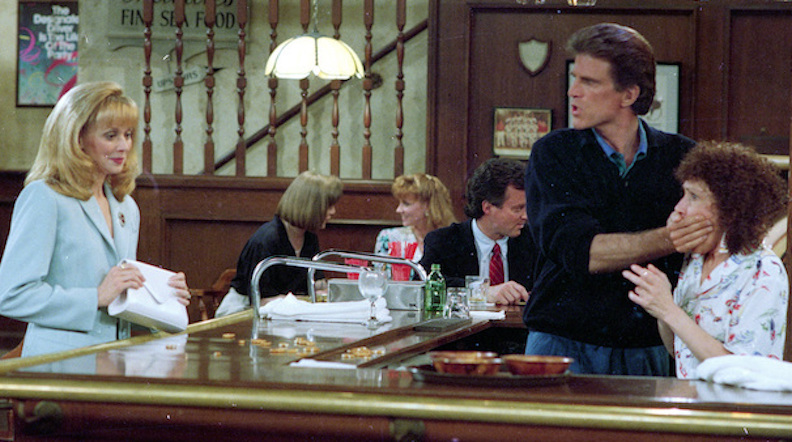 While everyone will be talking about last night’s GAME OF THRONES season finale, I’ve never actually seen an episode. But it is May, when most TV shows’ seasons come to an end. And looking at today’s date, I am reminded of two things: 1 – Today is my father’s birthday and I should call him. 2 – On this day back in 1993, one of my favorite series finales ever aired, bringing a close to maybe the best sitcom of its time.

CHEERS was probably my favorite show growing up. Sure, I was a decade away from legally being able to buy a beer in a bar – and I probably wasn’t the show’s target demographic being a pre-teen and all – but there was something about the series that I always appreciated. The characters were relatable and the situations were funny. For 11 seasons and 271 episodes, CHEERS was a comfortable hangout spot that anchored NBC’s prime time comedy schedule.

But all good things must come to an end, and on May 20, 1993 NBC aired the final episode of CHEERS, a 90-minute event that wrapped up 11 years of storytelling and character development.

The finale revolved around the return of Diane Chambers (Shelley Long), the ex-girlfriend of bar owner Sam Malone (Ted Danson), and how it throws the lives of everyone at the bar into some disarray. I never really cared for the character, and really CHEERS got a lot better after Long left the series, but you couldn’t really have a finale for the show without bringing her back.

What I love most about the series finale is that everyone got their happy ending: dim-witted Woody Boyd ended up on the City Council, bar manager Rebecca Howe found a man she could love for reasons other than money. Norm Peterson gets a job and Cliff Clavin gets a promotion at the United States Post Office. As Frasier Crane puts it, “It’s the greatest day in the history of Cheers!”

I think the best thing about CHEERS is that, more than 25 years after the show went off the air, the show still holds up. I just watched it again recently on Netflix and loved every minute of it.

What was your favorite series finale? Talk about it in the comments!