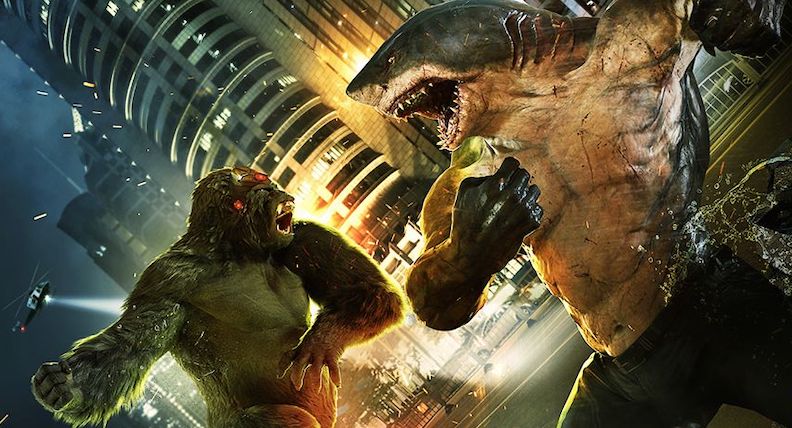 From the minute I saw the teaser for this episode, I was hyped. Pitting the two most fantastical characters in the ARROWVERSE in a giant battle almost guarantees a fun episode. Who doesn’t want to see a giant mind-controlling super gorilla battle a 10-foot-tall shark man?

I only wish the fight lasted the whole episode, but I get that they had other story beats they needed to get in to advance the overall seasonal story arc. Plus, it was probably a pretty expensive episode to produce. What we did see, though, was great, and I was pretty happy with the episode overall.

Cisco managed to finish working on the metahuman cure that’s taken him out of Central City and into the frozen tundra of the lab where they found Caitlin’s dad. But before they start taking away people’s metahuman abilities, they first need to test the serum out, so they decide to ask King Shark if he would consent to being turned back into a man.

Team Flash’s whole plan to get the metahuman cure out in the world is one test on one shark-man. I’m pretty sure the Food and Drug Administration wouldn’t be too pleased with their testing schedules.

King Shark is being held at an ARGUS facility, so we get a guest spot from ARGUS director Lyla Michaels, and she brings them to the containment area, where the Earth-2 King Shark is being held and the wife of his Earth-1 human counterpart, Dr. Tanya Lamden, is working with the meta-monster. They get the consent using a brainwave boosting helmet and inject the serum into Shark, turning him back into a man.

We have new actors portraying both Lamden and the human side of King Shark, which can easily be chalked up to the Flashpoint incident making more considerable changes to the world of THE FLASH.

Of course, Grodd steals the brainwave booster and heads to the city center to try and take over everyone in Central City, and his powers are so strong that even Flash and XS can’t stop him. But because sharks’ brains are different, one would be uniquely qualified to get in close and stop Grodd. So, the now-human King Shark agrees to change back, even though it means not being able to become human again.

Another big bonus for this episode, Joe West returns from visiting Wally in Tibet! Actor Jesse L. Martin was waylaid with a back injury, forcing him to be written out of the show for a few episodes, but he has thankfully healed up and begins dispensing advice (while showing pictures of his trip) to Iris, who is off on her own this epside. She’s a little trepidatious after the repeated deaths at the hand of Cicada she learned about from the last episode. Some words of encouragement from dear ol’ dad are important.

The only thing that could have made this better was more Ralph Dibny. I miss that dude when he’s not around.

This was just a classic episode of THE FLASH. It was fun, it had a big, fantastic fight scene and the characters didn’t spend too much time brooding around saying “woe is me.” Team Flash just worked together to take down the bad guy.

And when Iris finds out at the end of the episode that she missed the fight between the two behemoths, her disappointment is completely understandable. I bet Ralph would react the same way.