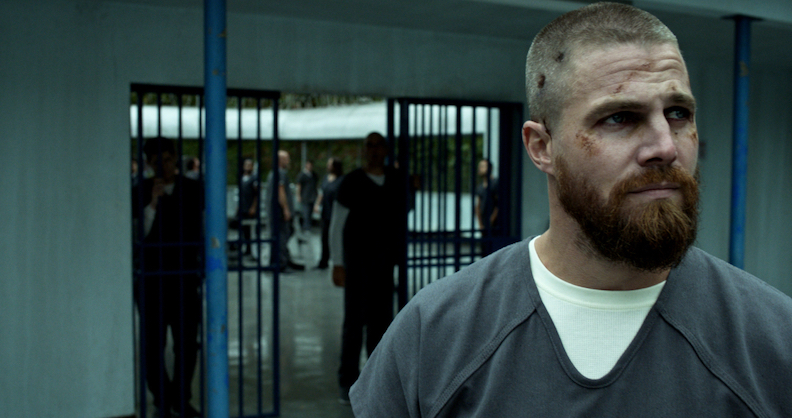 Oliver Queen is getting out of prison! But will he survive his last day at Slabside?

It’s no secret that I’ve been hyped for every episode this season, but seeing this from ARROW star Stephen Amell on Twitter the other day just amped up my anticipation for this episode:

Right then I knew this episode was going to be off the charts, and I was not disappointed.

Thanks to Laurel making a deal, Oliver is getting an early release from Slabside Prison after his team on the outside – with a little help from the mysterious new Green Arrow – finally captured Ricardo Diaz. But Diaz never goes quietly into the night, and he manages to get inside Slabside for one last confrontation with Oliver Queen, and he intends to kill his nemesis.

Admittedly, I had to get past the complete and total improbability of Diaz leveraging anything after getting captured so that he can take control of the whole prison to destroy Oliver. The logic of his power base has always been a weakness of Diaz’s story, but Kirk Acevedo’s amazing performance always helps to get through it. And as he waits for Oliver to make it through his gauntlet of escaped prisoners, Diaz builds the anticipation for a bloody brawl and what should be a final showdown. And if this is the last we see of Acevedo’s Diaz on ARROW, he went out with one hell of a bang.

Another standout performance in this episode is Michael Jai White as Ben Turner/Bronze Tiger. Throughout the season so far, Turner has been the fall guy for the other villains at Slabside, and Oliver gets through to him here to get him as an ally. Turner helps Oliver take down his former partners, Brick and the villain formerly known as Stardust and save the prison guards before Oliver had his one-on-one with Diaz in a prison aflame.

And the killing blow against Stardust (Cody Runnels) – setting him on fire as he falls down one story and onto a table – was one of the more gruesome deaths the show has ever experienced. And I absolutely loved it. I may have kept rewinding that scene to watch him bite the dust.

But the real surprise of the episode was Oliver’s little shadow this season, Stanley Dover. When Stanley gave away last episode that he killed the guard to frame Turner to have him sent into solitary, it revealed a little more darkness to Stanley than what we had seen previously. But here, it was full blast, capturing Oliver as he was heading for his confrontation with Diaz. Stanley admitted to Oliver that he was a bad guy, that he had killed many people before, but Oliver just takes him down like Stanley was a cheap backup thug.

After the battle with Diaz is over, though, Stanley makes it down to the morgue, where he ends up killing Brick and escaping Slabside. That should provide us with some fun moments down the line this season.

This episode could have been a season finale. I’d argue that it was better than many of the show’s season finales, but we’re not even at the winter finale for season 7. We even have one more episode before the big crossover with SUPERGIRL and THE FLASH, which is good, since we may need the cooldown before things get multiversal.

Here’s hoping that the show can continue on the roll it’s been on this season moving forward.