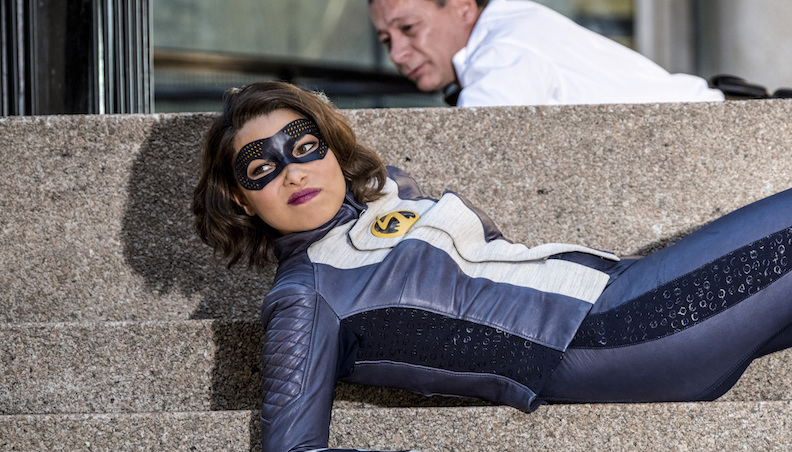 Barry Allen and Team Flash are back for a new season, but now they have a new addition in tow – Barry and Iris’ daughter from the future!

Previously, on THE FLASH…

The fifth season picks up where we left off at the end of season four, with the team being introduced to Nora West-Allen, who has managed to run back in time to help her dad take down The Thinker by blowing up the STAR Labs Satellite. She tells Team Flash that she screwed up, though, because now she can’t manage to go fast enough to run into the Speed Force and return to her life 30 years in the future.

Everything in THE FLASH comes down to the heroes needing to find a way to go faster!

She also managed to screw up the capturing of our villain of the week, a guy named Gridlock who Nora described as a “one-and-done,” who she learned about by spending time in The Flash Museum. Nora is dropping hints about the future all over the place, and if we’ve learned anything from LEGENDS OF TOMORROW, doing time travel is going to just screw up everything. Barry, of course, wants to send her back to her time to ensure the sanctity of the time stream, but things don’t seem to be going the way he wants.

Credit, by the way, to the team for remembering that a member of Team Flash is also a member of the Legends, as Barry asks Wally to consult them about sending Nora back to her time. Unfortunately, she’s filled with dark tachyons, which will cause the Waverider to explode if she gets on board. And Lord knows the LEGENDS have enough experience with that happening.

Nora – known as XS in her time – is around long enough for Barry to figure out that’s she’s hiding some things and he gets her to tell him why she’s so obsessed with working with her dad in the past – Barry dies in a weird event when she’s too young to remember anything about him. Barry is upset, of course, but hasn’t he seen the story in Harrison Wells’ secret chamber that said he disappeared? It’s not like this should be a big surprise to him. Guess he didn’t take it seriously.

So Barry decides to let Nora in and gives her a chance to help out in capturing Gridlock, which leads to a great sequence on a plane, where Gridlock is looking to absorb enough kinetic energy to become unstoppable by crashing the plane into Central City. Team Flash gets all sciency and they vibe Flash, XS and Kid Flash into the plane while it’s in zero gravity – when Gridlock has no kinetic energy – to capture him. Then they phase the plane through buildings and into the river. Day is saved and Barry tells the team Nora should stick around so he has a chance to train her in her speed powers.

It’s a shame Oliver Queen is starting the new season in prison. Barry could probably use his advice in becoming a dad to someone already out of diapers.

Amongst all the family drama, the season premiere manages its own lighter moments, specifically with Ralph Dibny, who is catching up on all the things he missed (or just forgot about) when he was taken over by The Thinker. He’s especially obsessed with the idea of not just time travel, but the “manyverse,” Ralph’s name for the multiverse. Ralph slowly putting everything together is a lot of fun, and is a great way to catch people who may be new to the show – and the ARROWVERSE – up on the weirdness of what they’re all dealing with. Now, at least, Ralph won’t go nuts when the crossover with Supergirl happens later this season.

Ralph also manages to come up with some information about Caitlin Snow’s father, who may still be alive. That should lead some B-plots throughout the first half of the season.

We also have Barry cycling through some old Flash outfits, because his current suit got ripped to shred by destroying the satellite. When he goes to stop Gridlock to start the episode, he’s wearing his original suit, and the cops he saves ask him if he’s going old school, leading to Barry to complain about the suit being a little tight. The second suit he wears this episode – which smells funny because he wore it when he battled King Shark – is also a little tight. Nora teases a battle between King Shark and Grodd and I really want to see that happen now!

But Nora saves the day by giving her dad a suit stuffed inside a Flash ring that she stole from the Flash Museum. Everyone is awed by it, especially Cisco, thinking he created it. Alas, Nora says, it was made by Ryan Choi (in the comics, Choi is a student of Ray Palmer and the latest person to be The Atom).

Who doesn’t get saved? Gridlock, who was being transferred to Iron heights when his transport vehicle is stopped and the guards are killed. When the doors are opened, Flash villain Cicada walks out of the shadows to kill the captured villain. Maybe this season, Flash won’t have to increase his speed to defeat the bad guy.

It’s a good start to the fifth season! The dynamics of the show are mixed up a little bit, with Nora around and Ralph now as a full-time part of the team. Let’s see how long they can keep the momentum going.