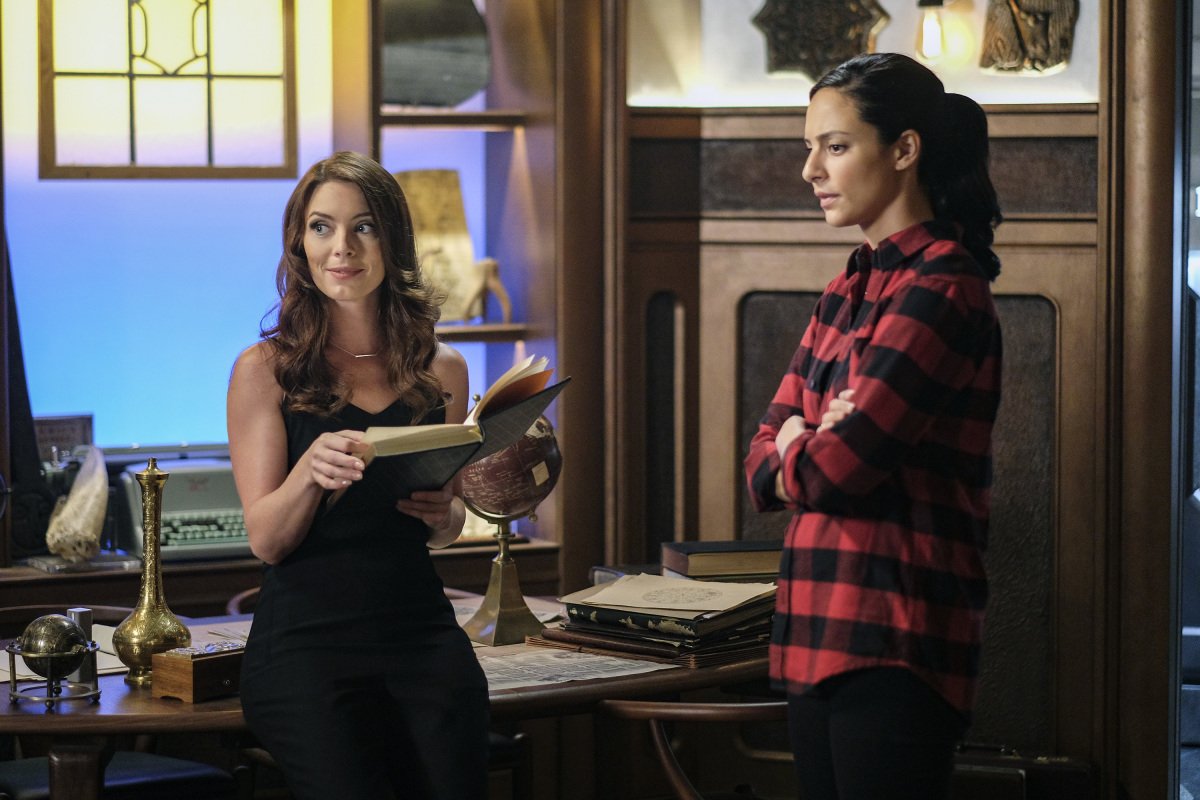 This week, the show pulls off a sci-fi staple: the time loop!

As the newest member of the Legends, and the only one from a dystopian future, Zari Tomez has been somewhat aloof from her teammates this season. She’s not completely on board with their mission to solely protect time rather than improving it. And with understandable issues with authority figures, she bristles taking orders from Sara.

All this comes to a head in “Here I Go Again.” Sara and Zari get into a major argument when the latter uploads an algorithm to try and find loopholes in time. She’s looking for a way to save her brother’s life, but the program fries Gideon. As captain and a protector of history, Sara’s not having it. A major blowout ensues, and Zari angrily storms off to repair the ship. As she tries to do so, getting some green fluid on her in the process, the Waverider suddenly explodes, killing everyone on-board.

And then Zari finds herself back in the middle of her argument with Sara again. Yep, we’ve got ourselves a time loop! Of course, this repeating sequence offers plenty of opportunity for some of the best comedy Legends of Tomorrow has done in weeks.  In a hilarious sequence, Ray keeps coming up with different reasons for Zari’s strange behavior, including cabin fever, space madness and too many donuts.

Zari notices the explosion coming from inside the ship. She suspects foul play. In investigating her teammates, she discovers their many secrets, both heavy and humorous. Nate and Amaya had an intimate moment during the last mission. Sara keeps sneaking off to the jump ship for private chats with Ava Sharpe. Ray is worried about Sara’s potential possession by Mallus. And Mick, best of all, is writing a sci-fi romance novel.

But even with Nate’s help (convincing him of the time loop with a Groundhog Day reference), Zari can’t stop the bomb. So, Zari and Nate decide to take advantage of the time loop and just mess around for several cycles. They eat a ton of whipped cream, throw snowballs at Mick, mess around with their expansive history wardrobe, etc. Zari in HawkGirl’s helmet is one of this season’s most delightful moments.

But the fun gets old, with Zari trapped in an infinite loop. She grows despondent and tries to shoot herself to end the loop. This finally convinces Sara that she’s telling the truth. The team gathers to find the bomb, searching until they get to the trash compactor where they find…Gary from the Time Bureau. He started the time loop to try and save the team. With his help, they locate the bomb but have no way to stop it. With Mick accidentally destroying the loop, giving the team one final chance to survive, Zari locks herself in a room with the bomb to try and save everyone else. She tearily tells the team how much they mean to her.

But when the bomb goes off….she finds herself alive on the Waverider, alone with Gideon’s human projection. Gideon tells her that she’s been unconscious for the entire episode, due to that green fluid. While she was knocked out, Gideon uploaded her subconscious and created the bomb scenario to force her to grow closer to the team. It’s a twist that’s a bit close to a dream sequence, but the episode is strong enough to pull it off. This is a home run, bringing comedy, pathos and an excellent performance by Tala Ashe.

To close, Zari wakes up and talks to each team member about their secrets. Particularly of note, she finally bonds with Sara. The captain tells Zari that while her brother’s death is in her past, it’s in Sara’s future, so maybe they could find a loophole to save him. In return, Zari encourages Sara to pursue Ava. After so much time alone and closed-off, Zari’s found a home with the Legends. And the show is better for it.

Legends of Tomorrow – “The Satanist’s Apprentice”

Superman and Lois – “Holding the Wrench”