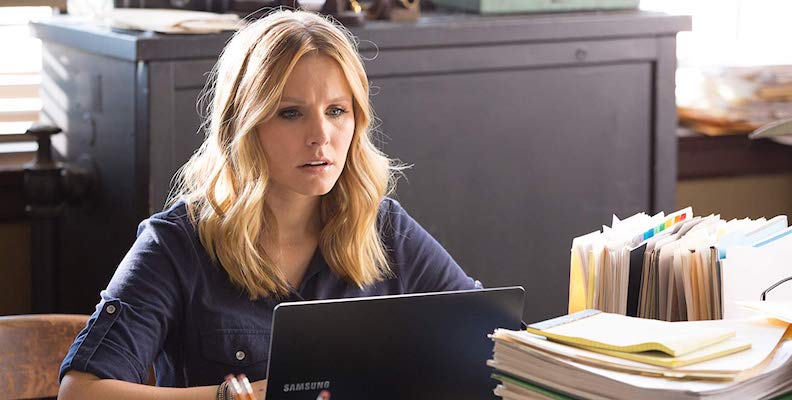 Former teen detective Veronica Mars returns home to Neptune 10 years after her high school graduation to save her ex-boyfriend from a murder rap, and manages to completely torpedo her life in the process.

This movie makes me sad.

Not that it was made. I appreciated the opportunity to revisit with Veronica Mars when the movie was released. The TV show was cancelled way too soon and still had a lot of potential for new and fun stories when it ended. But so much of what happens to Veronica and her friends in the 2014 revival film is just so fucking depressing.

Veronica (Kristen Bell) has moved on, you see. After her misspent youth solving crimes, the teen detective transferred out of the local college, went to law school and is interviewing with a massive firm as the film opens. She’s reunited with Piz (Chris Lowell), her drama-free third season boyfriend and she’s living a successful yet normal life.

Both in voice overs and in her interview for a job at the law firm, she alludes to herself as a recovering addict, a former adrenaline junkie looking to move on. But the lady doth protest too much, and it’s clear this movie is all about her relapse. And the man that drags her back down into the muck and mire of her former life is, of course, her son of a movie star ex-boyfriend, Logan Echolls (Jason Dohring).

Logan is accused of murdering his girlfriend, a Neptune high school classmate turned pop star, by electrocuting her in her bathtub. From the evidence presented, it’s pretty clear that he’s innocent, but the corrupt sheriff’s department is out for as much attention as possible, so they ignore all common sense and Logan is off hunting for an attorney to save his ass. Ted, the bumbling hospital attorney on SCRUBS, would be able to win this case easily, but Logan is concerned enough that he reaches out to Veronica and lures her back into her old life to help prove his innocence.

And like a recovering alcoholic being tempted with too much booze, Veronica lapses back into her old life, investigating her former classmates, getting into trouble with the sheriffs and generally being involved in mischief, shenanigans and attempts on her life and the lives of those closest to her.

That big law firm looking to hire her and make her rich and change her life forever? Yeah, she blows them off so she can tool around Neptune with Logan, cause a commotion at her high school reunion with Mac and Wallace and make a fool out of the Sheriff.

You can go home again, but you probably shouldn’t, because it just wipes out all the progress you’ve made in your life.

The saddest part of the movie, to me, is what happens to “Weevil” Eli Navarro (Francis Capra), Veronica’s sometime-muscle, sometime informant into the dark side of Neptune. When we see Weevil for the first time, he’s a completely changed man. He’s out of the gang, married with a daughter and running his own garage. After leaving the high school reunion, he tries to help someone being terrorized by bikers. The woman in the car is Celeste Kane, the mother of Veronica’s best friend Lili, whose death kicked off the series. Celeste shoots Weevil and the sheriffs try to frame him as a criminal. Veronica clears him, of course, but towards the end of the film, we see Weevil joining back up with his gang. Terribly depressing.

But at least Veronica is back in Neptune full time to save his ass when he gets in trouble again.

If this were the final word on the live action life of Veronica Mars, it would be completely disappointing. But, since we learned last week that Hulu was going to be bringing the show back as a limited series in the near future, I hope that creator Rob Thomas finds a way to make Veronica’s life a little less depressing going forward.