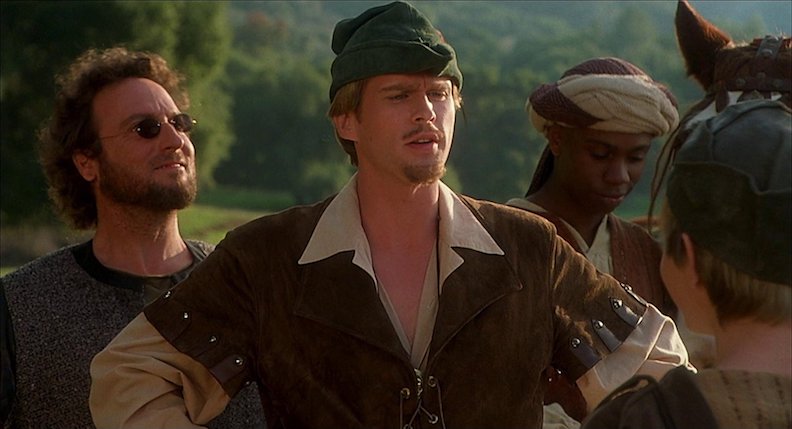 “Because, unlike some other Robin Hoods, I can speak with an English accent.”

Mel Brooks takes his talent to spoof to Sherwood Forest, sending up the mythology behind the greatest archer who ever lived (and Kevin Costner).

The last really fun Mel Brooks spoof movie, ROBIN HOOD: MEN IN TIGHTS is a great send-up of the character, but it probably wouldn’t have happened without Kevin Costner’s ROBIN HOOD: PRINCE OF THIEVES, which came out in 1991. Most of this film – including the quote at the top of this post – is a direct spoof of the Costner film.

And it’s simply perfect. I could watch this movie over and over again.

Cary Elwes, the star of my favorite movie ever in THE PRINCESS BRIDE, takes another swashbuckling turn here as the title character, combining the charm he exuded as Westley with some stellar comedic timing, usually as the straight man for the wacky cast of characters surrounding him.

The film is stuffed with great comedic actors – Richard Lewis as Prince John; Roger Rees sending up Alan Rickman’s turn as Sheriff of Nottingham (Rottingham in Men in Tights); Tracy Ullman, Dom DeLuise and Dick Van Patten all have bit parts. There’s very little that doesn’t work for me here.

But the real highlight is comedian Dave Chappelle’s first feature film role. Chappelle plays Ahchoo, son of Asneeze (Isaac Hayes), a parody of Morgan Freeman’s role Azeem, a Moor who follows Robin after the archer saves his life. Chappelle’s wit and timing is on full display here, and watching his earliest film role, it’s no surprise he went on to be such a big star.

Another hysterical addition to the cast – who doesn’t usually get a lot of credit – is Mark Blankfield, who plays Robin’s blind man-servant Blinkin. I mostly recognized Blankfield from two guest appearances on SAVED BY THE BELL (though I never would have been able to confirm that without IMDb), but he’s so over-the-top funny here. The jokes aren’t revolutionary in any way. In fact, Brooks just recycled a bunch of them from his previous spoof movies. But they work so well, which is a credit both to Brooks and the talented cast he put together.

There are a lot of classic, timeless jokes throughout the film, but ROBIN HOOD: MEN IN TIGHTS is also clearly a product of its time. References to Arsenio Hall’s dog pound, the beating of Rodney King or the Tomahawk chop may not make a whole lot of sense without the context of the era when the film was made. Thankfully, those jokes are the exception and not the rule, as Brooks mostly sticks to tried and true jokes.

ROBIN HOOD: PRINCE OF THIEVES is coming to Netflix in September, which means I can watch it for the first time in close to 20 years. But if I had to choose between the two, I’d pick MEN IN TIGHTS every time.