Subway Shorts – Kill Or Be Killed 19 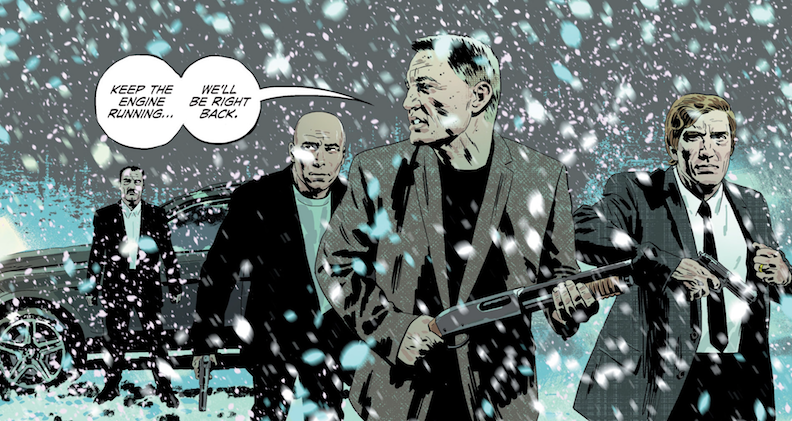 The Brubaker-Phillips collaboration nears its conclusion, and the last page brings a bit more finality than a penultimate issue usually does.

As one of my favorite comic books from the last two years winds down, Dylan comes face to face with the Russian mafia, out for revenge after Dylan spent so much time killing them during his days as a vigilante. With so many members of the police department on the Russians’ payroll, they easily discovered Dylan’s whereabouts when Detective Lily Sharpe said she was going to the institution to speak with him.

The ensuing shootout leaves many of the staff and the patients there dead, as Dylan and Sharpe try and find a way out. It’s a tense situation and Brubaker’s writing and the art from Phillips and Breitweiser are both dead on, feeding into that tension. Stalking through the hospital, the pair manage to take out the Russians who were shooting the place up. The level of relief is countered by the knowledge that the Russians left someone outside, with the car. Neither Dylan not Sharpe were prepared for it, and it doesn’t end well.

That Dylan doesn’t survive the story he’s been narrating isn’t a surprise. But I wasn’t expecting his death to come in the next-to-last issue. With the twists and turns the creative team has given us over the last 19 issues, maybe I shouldn’t have been surprised. Dylan has been living on the edge for a while.

There are definite threads left to pull at in the final issue. Namely, was the Demon real, or a figment of Dylan’s imagination? I’m sure the question will be explored, and I am definitely looking forward to see how the book wraps up.

The League Is Not United in Last Ride

Is It The End of the Green Lanterns As We Know It?