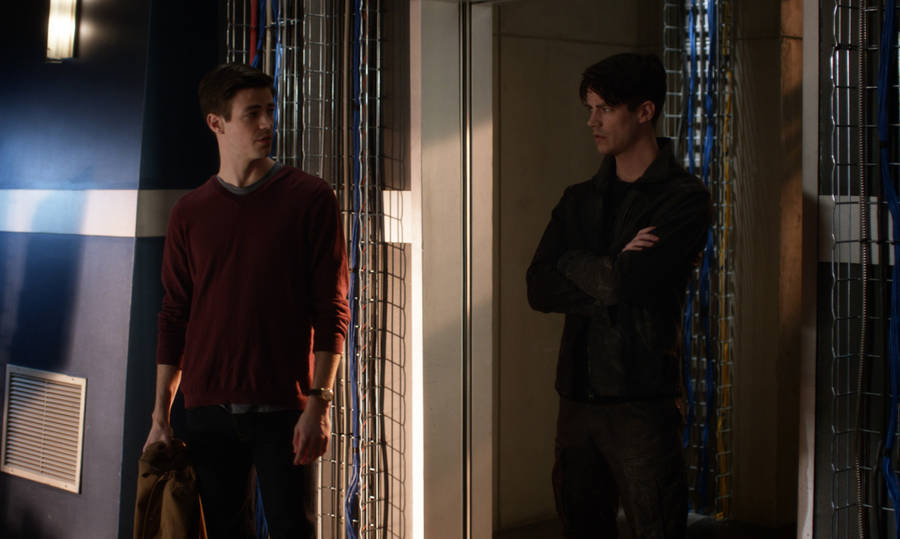 In the fantastic season finale of The Flash, sacrifices are made, big and small, to stop Savitar’s reign.

Season 3 found our main characters being secretive, selfish or foolish too often. This has made for a very frustrating viewing experience at times, especially on most of the plot-heavy episodes. But the upside of having our heroes lose their way is watching them find it again and become the best versions of themselves. In doing so, they act selflessly for the greater good.

This theme is present from the start of “Finish Line,” with H.R.’s sacrifice. Using the cloaking technology, he traded places with Iris before the climactic battle in last episode. Iris survives, thwarting Savitar and changing the future, as the villain is now a walking paradox. H.R.’s death is as moving as Iris’ supposed murder was shocking at the end of the last episode. In the end, through the support he received all season from Cisco, he found the strength to give up his life for another’s.

Caitlin’s story also moves back towards the light, though it’s not a reversion. Cisco, who’s kidnapped by Savitar to alter the Speed Force weapon and save him from the paradox, spends most of the episode trying to get through to his old friend. While she helps Savitar at first, destroying Black Flash, she changes her allegiance when evilBarry nearly kills Cisco. At the end of the episode, she turns down a cure from Julian, as she’s not Caitlin or Killer Frost anymore. She leaves to find her purpose. Caitlin’s evolution this season has been one of the most fascinating to watch. Keeping it open-ended has me excited for her possibilities going forward.

Then there’s Barry. This entire season came out of his selfish, stupid actions to create Flashpoint. It didn’t seem too far out of the question that an alternate version of him could become Savitar. As the season’s moved forward, we’ve seen him struggle not only with taking responsibility for his actions, but also questioning how to handle the ever-growing threats against Central City. Those conflicts come to a head in the finale, as he takes to heart what Snart said last week: “The Flash should remain a hero.”

To that end, Barry reaches out to Savitar, offering to find a way to save him from being erased by the paradox. He seems to get through to the remaining goodness in Savitar for a bit, bringing him back to S.T.A.R. Labs for the team’s help. But Savitar is too far gone. He opts to wreck the building and move forward with his plan. However, Cisco’s adjustments to the device makes it release Jay from the Speed Force. In a pretty cool action scene, Jay, Barry and Wally all take on Savitar, culminating in Barry phasing into the baddie’s armor. He has a chance to kill Savitar, but refuses. The decision almost costs him his life, until Iris shoots evilBarry, ending the threat for good.

You would think that wraps everything up. But Savitar isn’t the only fallout from Barry’s Flashpoint meddling. Without Jay in the Speed Force prison, it becomes volatile, threatening the city and possibly the planet with destruction. Since a speedster needs to stay in the Speed Ford and stabilize it, Barry enter the prison himself. As he says, it’s his penance for his earlier actions, which led to this conclusion. It turns out that Barry’s training to become a hero wasn’t limited to the first season. That process was ongoing, reaching the finish line in this episode. With his sacrifice, he lives up to the title of The Flash.

– Tom Cavanagh does an incredible job in this episode, bringing a poignant closure to H.R.’s story. He also gets to work in a Harrison Wells cameo. It seems like that Earth-2 Harry may stick around for a while.

– If Savitar wanted Tracy Brand dead, he could have done it in an instant. But he needs the Speed Force bazooka to be built so he can force Cisco to alter it as his insurance. Good job filling in the plot hole from earlier this season.

– Savitar makes a reference to DeVoe, AKA The Thinker. He’s one of Flash’s big villains yet to appear on the show. Season 4’s big bad?

– Towards the end, Cisco asks Wally to “reverse the polarity of the neutron flow.” Nice Doctor Who reference. My two reviews are converging!

– Thanks for those of you who joined me for my first attempt at reviewing a TV show on an ongoing basis! Barry may be imprisoned in the Speed Force for now, but I’m sure he’ll be back. So will my reviews! See you in the fall, Flash fans!