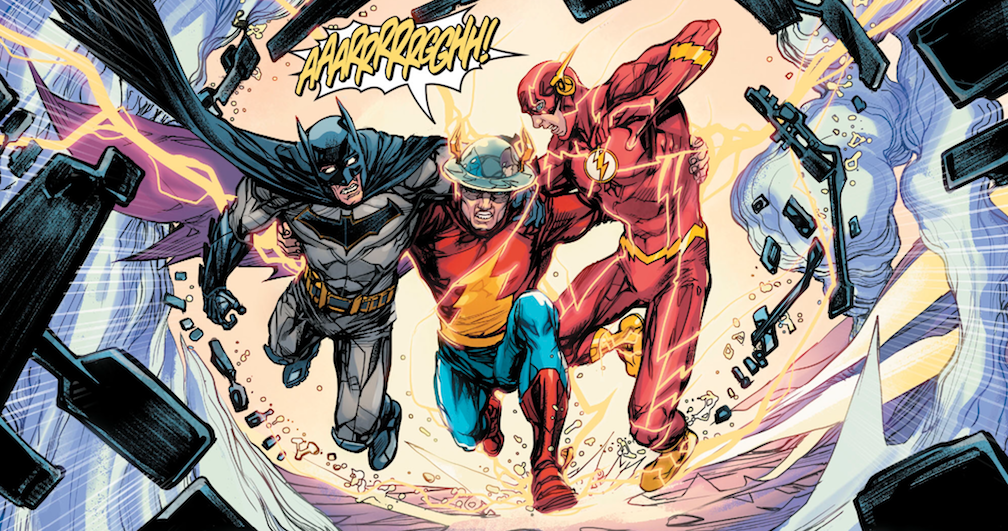 The final issue of the four-part crossover THE BUTTON leaves The Flash and Batman with more questions than when it all started. And the countdown to the next big thing has started.

The Flash 22
Written by Joshua Williamson
Art by Howard Porter

Nothing good comes from racing through the time stream, and Batman and The Flash spend the final issue of the four-issue crossover being completely confused. Batman, especially, is completely out of his element in the chaos of the time stream, as he spends most of the issue serving as background fodder while Flash tries to get the duo to safety.

At least they fare better than Eobard Thawne, the Reverse Flash, who ignores Flash’s warning about his impending death. If not for the Golden Age Flash, Jay Garrick, calling out to Barry Allen in the same way as Wally West in the DC Rebirth special last year, Batman and Flash would still be trapped.

I am a huge fan of artist Howard Porter’s interpretation of confused Batman face. That’s maybe the best part of the issue, in my opinion.

Unfortunately, the save by Jay Garrick – who Barry doesn’t remember at all – is just a tease. Unlike Wally, who needed Barry to remember him to tether him back to this world, Jay needed someone else to bring him out of the Speed Force. Garrick is the second member of the classic JSA that we’ve seen in the story, with Johnny Thunder ranting about losing the Thunderbolt in an earlier issue. DC Comics is doing a real slow build to the Justice Society of America’s return. I’m looking forward to seeing what they finally decide to do with the first super-team.

The whole experience took its toll on Batman, who closed the issue recalling the words of his father in the Flashpoint world – don’t be Batman, find happiness. And it leads to one of the most heartbreaking scenes of the Rebirth era.

Such a simple grid that says so much.

The issue closes with an epilogue that’s really just a tease for Geoff Johns’ next big event – Doomsday Clock – which will pit Watchmen’s Doctor Manhattan, who actually does make an appearance in this, against Superman.

DC is playing this whole thing perfectly. As a fan, I’m very excited!