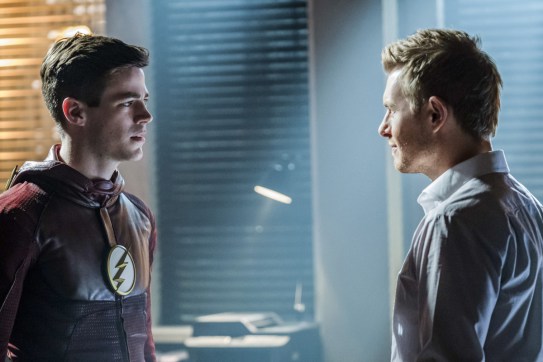 If last week found Team Flash at their lowest point, this episode takes the first step of progress in the fight against Savitar. But stubbornness and the weight of the world keep the show from gaining any lift-off.

Outside of the Gorilla City two-parter, The Flash hasn’t been much fun to watch lately. When Iris’ impending death at the hands of Savitar showed up in “The Present,” I thought it would lead to Barry moping or breaking up with Iris. During “Into The Speed Force,” he gets to do both!

After some technobabble, Barry runs into the Speed Force to save Wally. And it is not happy with him. After all the nonsense Barry pulled last season, the Speed Force is less helpful this time around. It personifies as a guest list of people who sacrificed themselves for Barry, including Eddie and Ronnie. Barry also faces challenges from a Time Wraith, Leonard Snart and the Zoom version of Black Flash! Seeing all these old faces return was a treat. Barry’s moping was not. His guilt over his past actions lack any type of impact since he keeps making the same mistakes. Everyone on this show talks and praises Barry so much for being a hero. But this season, he’s failed to be a good or compelling character out of costume.

It takes a visit and another pep talk from Jay Garrick to shake Barry out of it enough to fight back. They free Wally from a time loop hell of watching his mother die. But since a speedster needs to remain in the Speed Force (for some reason?), Jay volunteers to stay behind. It’s a shame that John Wesley Shipp’s characters keep getting put on the bus. This show could use more of his magnificent presence.

It could also use less Barry/Iris drama. But while Iris is willing to marry Barry, he tells her they should take a break until the Savitar situation is resolved. But it’s worded like he’s dumping her and she’s devastated. Good going.

But at least Wally is back. Barry also has a renewed focus to defeat Savitar, by embracing the future rather than trying to change it. I’m not sure what that means, but I guess we’ll find out!

– The B-plot revolves around Jesse Quick’s desire to find and beat Savitar for what he did to Wally. After unnecessary drama with H.R., she does track down the villain and actually stab him with a piece of his own armor. It’s the first damage any speedster has done to Savitar.

– So after her victory, Jesse decides to….go to Earth-3 to cover for Jay? It seems like poor timing given that she finally contributed to the team. Plus, why didn’t she have the same concern about leaving Earth-2 undefended?

– “Into The Speed Force” ends with Barry breaking up with Iris. Next week, the musical crossover with Supergirl? We’re in for some tonal whiplash!