Who Killed Kurt Cobain? Nicolas Otero owes us all apologies 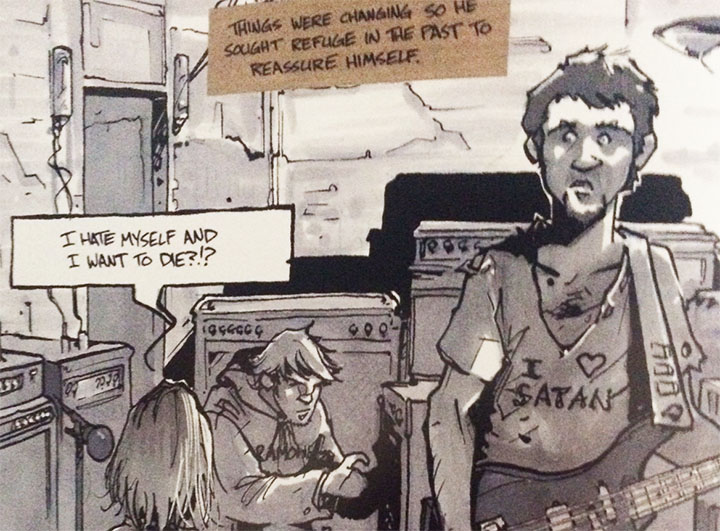 This is the English translation of an originally French fictional retelling of Kurt Cobain’s real life story as told by his imaginary friend. Hell of a lede, that one.

In February 1993, Kurt Cobain recorded a song called I Hate Myself And I Want To Die. It was meant to be a track on Nirvana’s third album, In Utero. Having finished Nicolas Otero’s “Who Killed Kurt Cobain?” it is hard not to empathize with this feeling. Reading this was a mistake.

The book follows Kurt Cobain’s imaginary friend, Boddah, through the major events of the doomed rock star’s life. Boddah is both Kurt’s conscience and enemy, spy and confidant. He is also an irredeemable fault with this story. Any fiction running a split personality thread is going to have to, by necessity, flip between first and third person in the narration. Some writers can pull this off so smoothly the reader doesn’t even notice they are switching viewpoints. Nic Otero is not one of these writers. This becomes especially problematic when the imaginary character inside Kurt’s head, Boddah, begins to have interactions outside of Kurt’s personal experience. The result is a narrative best described as a mess … and even better described as trying to follow two competing television signals on an analog antenna belonging to the last era of Cobain’s relevance.

The plot leads us through the Cobain legend that has become common knowledge, despite its lack of truth. Kurt was a tragic hero, a junkie with a heart, a genius tortured by his own fame. And Boddah watches all of this with the kind of concern you would expect from a worshipper at Cobain’s altar. We are treated to what amounts to a superhero story in which heroin and fame play the villain, with some shots taken at the media for spice. All of this, the entire book, is based on the fact that Cobain addressed his suicide note “To Boddah.” With a jumping off point like that, it really is no wonder this entire graphic novel makes no sense.

Alright, here’s the thing. I don’t know if the blame should go on Otero or the translator, Ivanka Hahnenberger, but the writing here deserves the kind of vicious public punishment we reserve for traitors, spies and Rebecca Black. He tries to get away with calling Kurt “surrealistically autistic” on page 18 and what follows are 130 pages of foolishness. We learn abut Kurt’s crossdressing – “the moment he posed in front of the mirror [in drag] he became his own groupie, one he would voluntarily fuck on the slippery slope of his own childhood” – and his drug use – “A manic depressive on smack floating in a warm deprivation tank, singing Leonard Cohen, masturbating watching golfers fish while dreaming of a stamp collection.” Otero describes Courtney with, “She was a riot grrl. An underground feminist hardcore punk challenging the power of the phallocratic system.” These are all the jabberings of a terribly lost writer trying to fill space.

Aesthetically, the book is quite pleasing. It comes hardbound with thick covers that sit sturdy on a shelf. The interior art, also provided by Otero, is quite pretty and done in varying shades of gray, save some colored spots to enhance certain scenes. The inks are done in a sloppy style that beautifully serves the tone of the story, and the lettering is perfect. Visually, this book is quite stunning as a graphic novel. Idea and Design Works put together a great product. I’m just not sure in this case they ever read it before sending it out to shops.

Final Wisdom: The cover photo for this review features a picture of the band with the narration “Things were changing so he sought refuge in the past to reassure himself.” I cannot help but wonder if that is reflective of Nicolas Otero, a man born in 1981 and in the prime demographic to have nostalgic feelings for easily the most popular band of his early teenage years. This was clearly a passion project, as he both wrote and drew the entire book and has obviously spent a good deal of time imagining what went on in Kurt Cobain’s head. I just don’t feel any of his conclusions are interesting, valid, or even logical. Worse, his way of imparting this passion is through the most senseless prose I have ever read. The phrase “surrealistically autistic” is the stuff of nightmare and that is only one of dozens of examples. Avoid this book. Avoid it like we all should have avoided worshiping this nonsensical rock singer while so many of his cohorts outshined him. Avoid it like heroin.