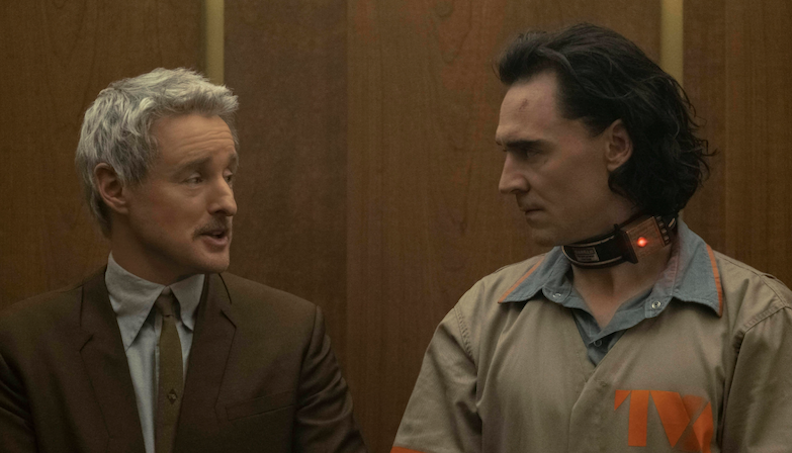 Loki finished his run in the MCU proper as one of my favorite characters. Not exactly a hot take here, but the charming, wounded, god of mischief brought a depth and intrigue and at times levity that the first two Thor movies would have otherwise been lacking.

I’ll be honest, I was concerned with the blanket advertisements for the Loki Disney+ show that premiered this week. It made me wonder if numbers haven’t been as strong as Disney had hoped with their Disney+ offerings, or worse, their advanced look at the end results had them worried.

Thankfully, my worries were unfounded and Loki’s first episode did a great job pulling us into yet another side of the Marvel universe, this time introducing the Time Variance Authority!.

I’m going to aim slightly different with this review and break it into a shorter summary, things I enjoyed, and things that didn’t hit for me. Hopefully for constant readers of my EARLIER WORK with The Stand or Falcon and the Winter Soldier, this will add some brevity (Editor’s Note: *checks word count* “Nope”) or at least some focus  to my ramblings!

Loki picks up right where we last saw Odin’s adopted son in ENDGAME, taking advantage of the chaos created with the Time Heist to steal back the tesseract and jump out of that timeline. We find Loki falling into a desert setting, surrounded by people that don’t understand him. Quickly, a new kind of portal opens up, different from the tesseract’s blue cloud style or Dr. Strange’s yellow circle portals.

Loki’s quickly caught by the Time Variance Authority(TVA), the Marvel equivalent to the LEGENDS OF TOMORROW’s Time Bureau on the CW. Micromanagers tasked with keeping the timeline in shape. Loki is incredulous, learning of the ins and outs of this new set of power players to the MCU. The TVA is in charge of protecting what they consider the “Sacred Timeline” and to clean up any anomalies that may fracture the timeline and cause a multiverse.

Loki quickly realizes his powers don’t work in this new realm and talks his way into a death sentence as only Loki could do. Here’ we’re introduced to Owen Wilson’s Agent Mobius, who sees in Loki someone with the skills and ability to help work on a case the TVA is investigating. Loki, being the god of mischief that bows to no man, is not easily convinced.

In Mobius’s talk with Loki, we also get a flash forward, with Mobius showing Loki his own unaltered timeline. Seeing his role in Frigga’s death as well as his own embracing becoming a hero, and ultimately his INFINITY WAR death at Thanos’ hands, Loki has a moment of truth where he realizes his path may be futile and working with the TVA may offer something more. After an escape attempt that reveals the TVA has dozens of variant copies of the Infinity Stones, Loki realizes he won’t be able to easily escape as the TVA power dwarfs even the infinity stones, some being used as literal paperweights.

The episode ends with a cliffhanger of sorts, the variant Mobius needs Loki’s help capturing? Loki! Though the hooded figure shown at episode’s end still leaves plenty of room for surprises.

Loki! Tom Hiddleston’s done amazing work with the role, career defining really, so a whole series dedicated to him sounded great on paper! I’ll admit being hesitant in hearing the pitch – Loki before his redemption – adventuring through history. The character had such a strong run from Thor 1 all the way through Ragnorak and ultimately fully embracing a hero’s life when he failed to kill Thanos in Infinity War. I was bummed all that was getting thrown away. They did a nice job here using some time travel tropes to catch this Loki up with the choices he made later. I didn’t want a whole series just treading water getting Loki back to a “good” guy. He’s not there yet, but the groundwork is in place and it seems they’re not meandering there!

Another beat I loved in this was a flashback to Loki robbing a plane with the unveiling that Loki lost a bet to Thor and was DB Cooper, infamous plane robber, with him being pulled back to Asgard by Heimdall after jumping from the plane. Right now, Legends of Tomorrow remains (and honestly, has been for a few seasons now) my favorite of the Arrowverse. If they tap into that irreverent, sometimes goofy, fun vibe for their time travel? That bodes well for the rest of the season!

Final thing I liked is they directly addressed the Endgame Time Heist when Loki pointed out the Avengers were meddling in history as well. The answer? “They did what they were meant to do.” Quickly deflating a lot of the debate on why the TVA would ignore some variants but not others.

Coulson! Phil Coulson himself made an appearance with his 2012 death in the first Avengers movie as part of Mobius’s trip down memory lane with Loki. What’s wrong with that you say? This was the first time Coulson’s been shown in a post-death timeline in the MCU and they had a chance to add legitimacy to his resurrection on ABC’s Agents of Shield. Loki refers to Coulson’s death being a waste and I was amped for Mobius to drop literally any type of Easter egg here referring to Coulson’s continued adventures. This isn’t surprising as Agents of S.H.I.E.L.D. has been near-wiped from existence in the MCU proper at this point, notably the Darkhold that appeared in Wandavision was different in design to the one used in S.H.I.E.L.D. But in a world they’re establishing with variant timelines? They could have thrown a bone here!

Last thing I didn’t like? The Disney+ series have been plagued with the Hype Machine (no worries, I’ve retired the Hype Machine® for this run; but beware, hype never truly dies!). WANDAVISION had a laundry list of guesses put out weekly, bated by the actors and showrunners themselves, many of which involved Mephisto. In a key early scene where Mobius is asking for a description of the attacking variant and a child points to a stained glass art showing a devil? You tend to speculate! So when showrunner Michael Wildron immediately debunks the speculation by paraphrasing “oh gee, didn’t even think of that connection, wow!” it does make you wonder how genuine he’s being. Not that Mephisto should be expected at this point, but more like read the room!

Enjoyed it! A lot of world building, a strong cliffhanger, and I appreciate not spinning their wheels to retell Loki’s redemption. Looking forward to week 2!